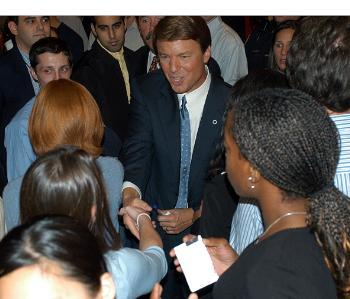 Senator John Edwards, D-N.C., stuck to the core message of his presidential campaign—emphasizing his humble roots and attacking the Bush administration’s Iraq policy—during the first installment of “Hardball: Battle for the White House,” a nationally-televised show shot live at Harvard last night.

Edwards, who has had several noted flubs on live television appearances, held his own against the show’s pugnacious host, Chris Matthews, and wowed the crowd both at the Hardball shooting and at and earlier meeting with students at Kirkland House.

He emphasized that some control of Iraq must be handed to the U.N.

Before the “Hardball” taping at the John F. Kennedy, Jr. Forum, Edwards, one of nine Democratic contenders vying for the chance to dethrone President Bush in 2004, impressed a standing room only crowd of hundreds in the Kirkland House JCR.

Edwards isn’t at the top of the polls nationally—a recent poll had him tied with the Rev. Alan Sharpton for fifth place among the nine Democratic presidential contestants—but he did well with Harvard students last night.

“Senator Edwards has definitely left a large impact on the minds of the students,” said Joey M. Hanzich, a member of the Harvard College Democrats who helped organize the Kirkland event. “The other candidates have a lot of work to do.”

Senator John F. Kerry, D-Mass., will appear at Kirkland next Monday, prior to his own appearance on “Hardball.”

Edwards gave his opinions on a wide range of topics on everything from whether the Red Sox will beat the Yankees—they will—to how he thinks recently elected California Governor Arnold Schwarzenegger will do in office: not very well.

A Republican National Committee spokesperson criticized Edwards for his “personal attacks” on the president last night.

“Senator Edwards failed to present any ideas for policy proposals,” spokesperson Christine Iverson told The Associated Press. “All of the Democratic presidential candidates have failed to catch the imagination of primary voters.”

Edwards articulated his three main issues as Iraq, the economy and health care.

On Iraq, Edwards defended his vote in favor of using force in Iraq despite the opposition of the U.S.’s allies on the Security Council.

He also said that had he been president he would have approached the situation differently, though he added that it was in everyone’s interest to see Saddam Hussein gone.

But he stressed that America does not need a new foreign policy doctrine of preemption.

On the economy, Edwards said he would stop tax cuts for those with annual incomes greater then $200,000, keep the estate tax, close corporate tax loopholes and raise capital gains taxes for the wealthiest Americans while lowering them for the middle class.

Edwards also said he would mandate health care for everyone under 21 years old, seek to provide health care to the “most vulnerable Americans,” including the elderly, recent college graduates, and those who come from families without coverage, and work to lower the cost of health care in general.

“Just like education, I want to make health care a birthright up to age 21,” he said.

Edwards attempted to silence speculation that he may be interested in the vice-presidency.

“I am in this to be the President of the United States,” he said.

While reaction to Edwards’ policy views was mixed, audience members praised his communication skills. Edwards, the first Democratic candidate to speak at Harvard, was applauded for his ability to remain cool and calm and for what several audience members called his “personable nature.”

He also was “very clear and articulate” according to Brian M. Goldsmith ’05.

While the number of student recruits have not yet been counted, Hanzich said there was a “tremendous student response” and that many want to help campaign in New Hampshire.