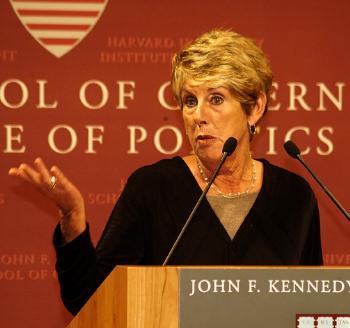 Brady told the audience of her push in the late 1980s for a ban on so-called “plastic guns,” which metal detectors can’t catch.

A certain representative from Wyoming by the name of Dick Cheney did not return her calls, she said, adding that she’s not surprised to hear that he is currently in an “undisclosed location” now.

“I think he’s still hiding from us,” she said. “We’ve got to tell him to come out of hiding, we got the votes, plastic guns were banned.”

Brady has been a crusader for tougher gun control laws since the 1980s, when her husband Jim was critically wounded in a failed assassination attempt on President Reagan. Brady has worked successfully to lobby for legislation such as the Brady Bill—named for her husband—and the Assault Weapons Ban.

Director of the Institute of Politics Dan Glickman introduced Brady as a powerful proponent of gun control who fights with “an ammunition of reason, statistics, and compelling personal narratives.”

“If you look in the dictionary under the word ‘tenacious,’ you would find Sarah Brady’s picture,” Glickman said.

Her victories over the National Rifle Association (NRA) are like “David over Goliath,” Brady said, since gun control advocacy groups do not have the same financial war chest that the NRA has.

She praised events such as the Million Mom March, which she said draw national attention to gun control. She also asked the crowd to visit the website www.nrablacklist.com, an anti-NRA web page that highlights the NRA’s so-called “blacklist” of gun control supporters.

“I know why my husband Jim and I made their list, but we still don’t understand where Britney Spears came from,” she quipped.

Brady emphasized the importance of finding support for gun control on both sides of the political aisle.

“I listen to Rush Limbaugh and Dr. Laura every afternoon just to know what the other side believes,” Brady said. “We just need to maintain a reasonable, common sense tone to gain bipartisan support.”

Elizabeth Goldschmidt ’06 asked Brady how she would dictate firearms policy if legislation was left to her discretion.

In response, Brady said she wouldn’t ban personal gun ownership, but instead would impose the most vigorous background checks possible and require owners to complete a rigorous firearms safety training course.

“Her message was inspirational,” Daniel Mejia ’07 said. “I liked how she appealed to the middle by making clear that she doesn’t want to take away the right to own a gun.”