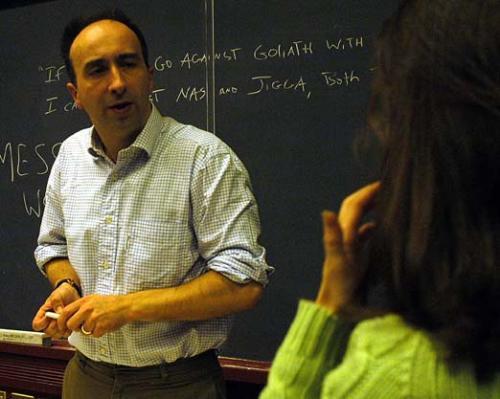 Trash Salman Rushdie or John Updike, and you might make a name for yourself as a literary critic. Some reviewers rely on vitriol to buoy their reputations and lose readers, but those who criticize with purpose and insight often gain a reputation as a savvy critic.

That’s what some say James Wood, critic for The New Republic and formerly the Guardian, has done. Now, as a visiting lecturer in English and American Language and Literature, he wants to bring this undaunted approach to Harvard classrooms.

Wood follows a precedent for literary celebrity that comes through reviewing rather than writing fiction. Known for his thorough analysis and his unwavering stance in the face of greats (Pynchon, DeLillo and Updike have all felt the brunt of his pen), Wood, 37, has been called the last “true” critic. He himself agrees that broader, contextualized criticism—which not only evaluates literature but espouses a theory of art—is less prevalent in these times. The English department, then, has snatched up one of a dying breed.

“It is dying out,” Wood says, “and a lot has to do with the rise of English studies—which isn’t to blame the [universities], of course.” Wood doesn’t ascribe to the “anti-intellectual schtick” of writers like Gore Vidal or Saul Bellow—he sees his year-long guest lectureship at Harvard as a chance to broaden the horizons of many undergraduates.

“I want to bring some of the literary world into the classroom,” Wood says, “and I think that might have been part of the English department’s idea in hiring me.” His fall course, English 90lv, “Consciousness from Austen to Woolf,” explores ways in which novelists represent thought. Originally intended for 15 students, the class was more than doubled to 35 when over 70 people came to the first meeting.

“I don’t like turning people away,” Wood says. “I don’t quite understand the capping thing.”

So far he says size hasn’t hindered the class, even though it is a discussion-based seminar.

Wood’s aim in teaching the class, as well as next semester’s course on postwar American and British fiction, is to present what he calls a “writer’s criticism,” which he differentiates from a scholar’s literary analysis.

“Writers read books for aesthetic success—it’s intensely important to them whether something works or not, whether it’s good or not.” Wood concedes that this approach may seem unusual to students unaccustomed to criticizing “high” literature.

“It encourages students to do what they’re least confident in doing,” he says, “which is making aesthetic judgments.” Wood notes that it is something that he himself was uncomfortable doing at the age of 20.

“I wasn’t sure why something was necessarily working or why it wasn’t.”

Wood’s criticism is different from most of this age, and that’s mostly a result of its intent. Rather than simply praising or condemning a novel, he wants to go further—to see what the novel says about us and life in general.

“The novel exists to be affecting,” he says. Accordingly, the ability to criticize aesthetics is important, for it acknowledges this intent.

When a reader approaches a novel through a critical lens “we’re also honoring the novel’s difference from other discourses and other modes of knowing.” To put down Lolita and simply like it is not good enough.

“What works well; why is this moving me?” Wood asks. “The novel exists to move us, to shake us profoundly. When we’re rigorous about feeling, we’re honoring that.”

Wood says he hasn’t encountered any hostility from academia over lecturing without a Ph.D., which he feels is “rather remarkable.” He acknowledges that his lack of specialization might hinder his approach in someways, but also thinks it could help. He’s not interested in the “roads, byways and lost lanes” of academic research, though he suspects most academics aren’t either. Some authors he will be lecturing about in his next class—among them Bellow, Martin Amis, and Ian McEwan—may even visit the classroom.

Although the class will study a “living literature,” Wood does not ascribe to a distinction between “new” and “old.”

“There shouldn’t be a break between contemporary and canonical literature,” he says. “The canon is always being made, by writers themselves, reading the canon.”

He does, though, acknowledge that this is a hard fact to grasp.

“When we read grandly canonical works we forget that they’re made, that they’re written.” In general, he notes, there is a tendency to critically evaluate contemporary literature but to leave older works unquestioned—as if they’ve been mere “fact” for as long as they’ve existed.

An example Wood cites is To the Lighthouse by Virginia Woolf, one of his favorite authors. Wood doesn’t allow his reverence to dissuade his critical eye—it’s easy, he says, to forget that “it was constructed word by word by a suffering, sometimes joyless, woman in Sussex.”

“The problem is less to convince people that contemporary writing is living than it is to convince them that canonical literature is not dead,” he says.

Wood got his start as a critic immediately after college. During his time at Jesus College in Cambridge he won a prestigious prize sponsored by the Guardian for his undergraduate journalism. After he graduated he wrote to the Guardian’s literary editor and asked for a job. He got it, but his early assignments were short—five to eight-hundred word reviews. He later became deputy editor of the magazine’s book page, but even that didn’t yield the sort of expansive, in-depth criticism he longed for.

“It was really not until I got to the States that I got to do longer [reviews],” he says. Wood began working at the New Republic in 1995, which allowed him to write much longer pieces.

He says he always knew he wanted to do an “odd” form of journalism—something between literature and the more formalized institution of journalism.

The idea of migrating between these two worlds is a significant one, particularly because the division has only recently developed. “Until the late nineteenth century,” Wood notes, “criticism was done by writers…[Henry] James, [Samuel Taylor] Coleridge…there’s a reason why James’s criticisms seem congruous with his novels. I don’t think there’s much difference, in James’s mind, between writing a novel and writing a book [of criticism].”

Wood has also written fiction—his debut novel, The Book Against God, came out earlier this year to mixed reviews, and he also published a collection of essays several years ago, entitled The Broken Estate. Yet he is known mostly for his criticism.

“I love doing what I do, because there is this space waiting to be filled…between literature and some of the rigor of scholarship,” he says.

The view that the line between literature and criticism shouldn’t exist is evident in Wood’s essays themselves. They are long pieces, four thousand words that critique concepts and ideas as much as the texts. In the course of a review he often alludes to other authors and works, since “all serious writers are very serious readers.”

Literary overlap is very important to Wood, who believes that literature cannot be studied without the commingling of styles and nationalities.

According to Wood, one of the difficulties of analyzing literature in a university setting is the prospect of covering so many important authors and works in a single class.

Ironically, Wood thinks that less reading should be done in American universities.

“I feel that you’re reading too much,” Wood says. “I’m generally in favor of reading a bit less and knowing it deeply.”