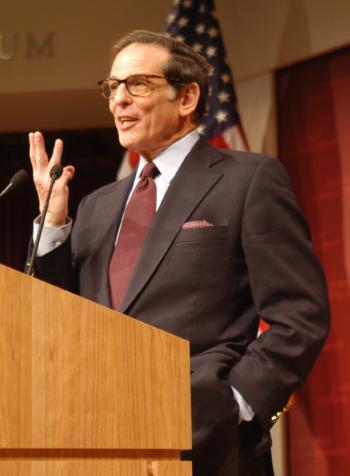 Biographer ROBERT A. CARO speaks about President Lyndon Johnson’s years as a senator last night in the White Lecture on Press and Politics at the Kennedy School of Government.
By William C. Marra, Contributing writer

Lyndon B. Johnson’s rise to power as “Master of the Senate” was due to his tremendous power of personality and ruthless political maneuvers, biographer Robert A. Caro said at the Kennedy School of Government (KSG) last night.

Caro attempted to decipher “the real essence, the fundamentals” of Johnson, as he delivered the annual Theodore H. White Lecture on Press and Politics.

Caro warmed up the crowd with a joke and by confessing that “I’m always more comfortable sitting at a typewriter at my desk than I am at a lecture like this.”

He began his commentary on Johnson by noting that then-President Franklin D. Roosevelt, Class of 1904, described a young Johnson as “the kind of young, uninhibited politician I might’ve been—if I hadn’t gone to Harvard.”

The lecture proceeded to analyze the forces behind Johnson’s rapid rise to power in the Senate. He became the leader of the Democratic Party in 1953, after only four years in office.

Caro is widely considered the authority on Johnson, having completed the first three volumes of a projected four-part series entitled The Years of Lyndon Johnson. The latest installment, Master of the Senate, won Caro the 2002 Pulitzer Prize for Biography.

Caro’s first work, The Power Broker: Robert Moses and the Fall of New York, won him the 1975 Pulitzer.

Caro has said that he writes biographies “not just to show the life of a great man” but also “to use biography as a means of illuminating the times and the great forces that shape the times.”

As such, he made clear that his interest in Johnson the senator is not limited to what the man did, but also to how he revolutionized the nature of legislative power.

According to Caro, Johnson’s meteoric ascent was possible because he was able to tap and exploit previously neglected avenues to power.

Johnson himself was conscious of this fact, having said, “I do understand power, whatever else may be said about me. I know where to look for it and how to use it.”

Yet as he does in his biographies of Johnson, Caro said he did not idealize his subject, recognizing the more undesirable characteristics as well.

“Johnson used all these powers with a ruthlessness that made them all the more powerful,” Caro said.

Using his charismatic personality, Johnson alternatively employed charm and fear to accomplish his goals, and was willing to hurt both friend and foe when it proved beneficial, the Pulitzer-Prize winning author said.

But Caro said that Johnson’s political career was not characterized simply by a power grab.

Proceeding from the idea that “power reveals,” Caro argued that “once he had acquired power in the Senate, [Johnson’s] compassion shines forth.”

He used power “not only to manipulate others, but to help others,” Caro said.

Describing the passage of the 1957 Civil Rights Bill as Johnson’s “greatest accomplishment,” Caro called him the greatest white champion of civil rights since Abraham Lincoln.

When asked during the question and answer session if “the means justify the ends”—if Johnson’s beneficent legislation justified the ruthless tactics he employed to attain power—Caro did not give a definitive response.

“I haven’t resolved the answer,” Caro said. “I’m still working that out. I don’t know if I’ll ever work it out.”

Audience response to the lecture seemed to be overwhelming positive.

“What struck me is I’ve attended many of these [lectures] over the years, and I’ve never seen the audience so engaged with the speaker,” Bradley P. Ware ’71 said. “He’s a very warm person.”

Caro is currently working on the fourth and final volume of his Years of Lyndon Johnson series, which focuses on his years in the White House.

When asked when the projected publication date was, the notoriously voluminous author quipped, “Whatever I said, why would you believe me?... I’m working as fast as I can.”

The lecture, cosponsored by the Institute of Politics and the Shorenstein Center on the Press, Politics, and Public Policy, was held at the John F. Kennedy Jr. Forum.

Caro will participate in a follow-up seminar this morning at 9 a.m. at the KSG.