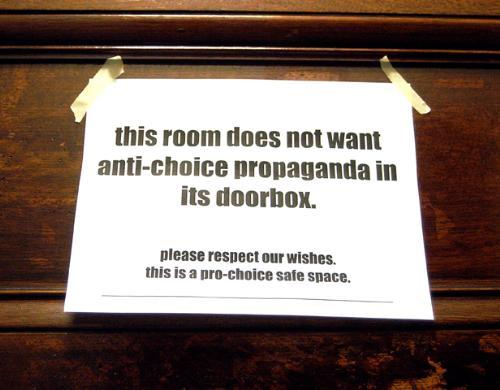 The residents of an Adams suite protested HRL doordropped literature by posting a sign distributed over e-mail by Harvard Students for Choice.
By Joshua P. Rogers, Crimson Staff Writer

Harvard Right to Life’s controversial publicity campaign, which has been waged on entryway bulletin boards and in a display outside the Science Center, has moved on to a new frontier: door-boxes.

The 11-page newsletter requested by HRL was dropped in the door-boxes of each upperclass House early this week.

In response, Harvard Students for Choice distributed a poster on its e-mail list, featuring in large writing the slogan, “This room does not want anti-choice propaganda in its door-box.” The group encouraged students who objected to receiving the HRL material to post the sign on their door.

“Anyone who is opposed to receiving our material won’t receive it,” he said.

The supplement was produced by Human Life Alliance of Minnesota, which according to its website is a “non-profit, non-denominational organization dedicated to protecting life from conception to natural death.”

Tapia said HRL requested the publication but declined to comment on how the project was funded.

Harvard Students for Choice President Abigail L. Fee ’05 cited the use of a Holocaust survivor’s story and the comparison of Planned Parenthood to white supremacist organizations as the elements of the publication that she found personally offensive.

“The next step is to offer to whomever wants it—through the Students for Choice mailing list and our website—a pro-choice fact sheet,” Fee said.

According to Tapia, HRL stands by everything in the supplement, including the controversial articles concerning rape and racism.

HRL said it did not consult the Office of Sexual Assault Prevention and Response before distributing the newsletter.

Last week, HRL and Students for Choice agreed to voluntarily run posters and other public displays containing language that describes rape or sexual assault by the office. But according to Tapia the door-drop supplement is not covered by the agreement.

The promotion is the latest in a series of controversies this fall surrounding abortion and first amendment rights.

HRL posters hung in entryways and hallways earlier in the semester sparked heated debate over many House e-mail lists. And less than two weeks ago, an HRL display composed of miniature, symbolic American flags was uprooted in front of the Science Center by an unidentified college-aged male.

HRL plans to engage in a number of additional activities throughout the week, including tabling in every House dining hall and launching another batch of posters.

These posters—mounted last night—feature a new slogan, “Think About It,” which has been modified from the previously controversial slogan, “Women Deserve Better.”

The Mather House discussion was planned before this week’s controversial box-drop took place.