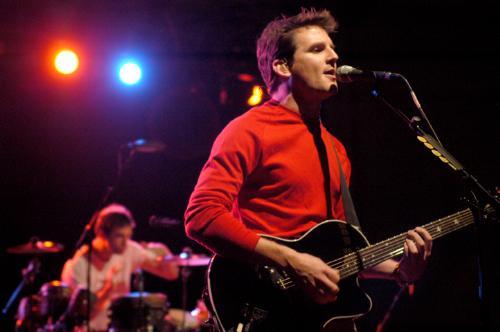 Guster vocalist and guitarist ADAM GARDNER, front, and drummer BRIAN ROSENWORCEL, rear, perform onstage at the Gordon Track and Field Center in front of a crowd of about 1,800 last night.
By Andrew S. Chang, Contributing Writer

Blanketed by multi-colored strobe lights, the band played a number of hit songs, including “Keep It Together,” “Barrel of a Gun” and “Fa Fa.” At one point, ping-pong balls with the words “Harvard [heart]s Guster” written in black marker were thrown onto the stage. Some also blew soap bubbles in the direction of the band.

“[The concert] is a huge success,” said Robert G. Bonstein ’04, director of the Undergraduate Council Concert Committee. “Everything came together well today. It looks like a real show. We think everyone is having a great time.”

Harvard’s history with concerts prompted some to wonder how popular last night’s event would be. The concert was the first big name pop music event—aside from an appearance by the Verve Pipe at Springfest 2002—in more than two years. But last night’s audience far exceeded the roughly 900 who attended that concert, an October 2001 performance by Dispatch in Sanders Theater.

Still, the 1,800-person audience—as estimated by the Harvard University Police Department—was far from the sell out crowd of 2,500 sought. Bonstein said he felt that the limitation of ticket sales to only Harvard students was the cause of the underselling, citing the fact that most universities sell concert tickets to other local schools. Bonstein said he wants to pursue this ticket-selling policy for Harvard’s next concert, which he hopes to start planning in a week.

Nevertheless, Bonstein and council President Rohit Chopra said they were very pleased with the end result of this concert.

“It was a very surreal experience,” Chopra said. “I did not think it happened at Harvard.”

Even Dan S. Haimovic ’05, who described the crowd as “pretty dead,” said he enjoyed himself.

“It was fun,” Haimovic said. “I never heard them before but I liked it.”

The concert began with songs from one of 2003 Rolling Stone’s Top Ten Artists to Watch, Katheleen Edwards. There was an obvious lack of energy in the crowd during her performance.

Once Guster entered, however, the crowd dynamic transformed. The band was greeted by a loud ovation and chants of “Guster!”

During the concert, the band energized the crowd by poking fun at Harvard students.

Guster’s Ryan Miller read aloud an Oct. 15 Crimson article which referred to the popular hip-hop band, Outkast, as “the Holy Grail” and Guster as the band that Harvard “settled” for. Despite these words, Miller said he felt welcome by Harvard.

This was contrary to his initial expectations, he joked.

“I was expecting a little bit of a lackadaisical, arm-folded kind of thing,” he said, ”Not that we’d think they’d be snooty.”

Guster also stirred the crowd by referring to Adams House and Pinocchio’s Pizzeria.

After the concert, ten lucky students got to meet the band.

Naomi M. Ages ’05 described the feeling as “amazing.” She said that she has been the “hugest” Guster fan since she was 13.