SafetyWalk No Longer 'Up and Running' 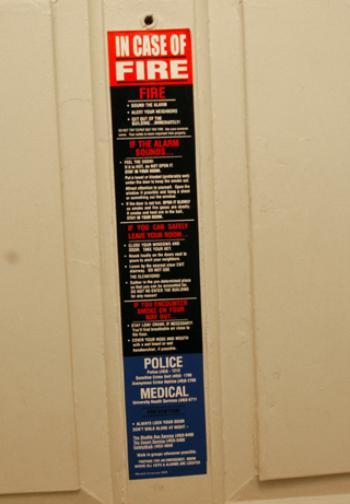 The University advertises SafetyWalk in various venues, including signs on fire doors, like this one in Lowell House...
By Nadia L. Oussayef, Contributing Writer

In the wake of last week’s sexual assault outside St. Paul’s Church, students seeking the services of one of the College’s most heavily-publicized safety resources discovered that the program is apparently defunct.

In warnings to House lists posted after a female undergraduate was assaulted while walking home to Dunster House last week, administrators urged students to use SafetyWalk, a student-run program of late-night walking escorts.

But calls to SafetyWalk over the past week have not been answered. And callers are transferred to a voice mail box too full to accept another message.

“We don’t think it is up and running as we speak,” Harvard University Police Department spokesperson Steven G. Catalano said yesterday.

On HUPD’s website, SafetyWalk is listed as one of a few safety resources available at Harvard’s Cambridge campus, along with shuttle and van services.

But as of yesterday, according to College administrators, no one had filed papers this year to renew SafetyWalk’s status as a student group.

Nevertheless, SafetyWalk’s disappearance from campus came as a surprise to many.

Susan B. Marine, who directs Harvard’s Office of Sexual Assault Prevention and Response, said that she had been giving out SafetyWalk’s phone number along with information about shuttle services to concerned students until two days ago.

But on Monday, Marine said, she stopped after a representative from HUPD told a meeting of the Undergraduate Council’s Safety Committee that SafetyWalk may no longer be operational.

“I literally did not know until five o’clock yesterday that it did not exist,” Marine said.

According to Assistant Dean of the College Paul J. McLoughlin II, SafetyWalk has until the end of the semester to register.

“To date, SafetyWalk has not completed their registration forms; however, they still have a couple of weeks this term to do so before we would advertise that they are an inactive, and a defunct group,” McLoughlin wrote in an e-mail.

But the group’s return seems unlikely.

Current staffers could not be located for this article, and on Monday night, SafetyWalk’s former headquarters in the Science Center were deserted.

The security guard on duty said that although he had been working at the Science Center for a year, he’d never seen anyone manning the SafetyWalk phones.

Students say they have become increasingly concerned for their safety after several women were groped in Cambridge Common earlier this semester and particularly after last week’s sexual assault.

“I find the recent assaults very unnerving because we operate in a place that we think is safe,” said Stephanie G. Nieto ’06. “But Cambridge is a city, and we can’t take our safety for granted.”

And in the past week, SafetyWalk’s disappearance has frustrated some.

At a Thursday night meeting of the Graduate Student Council of the Graduate School of Arts and Sciences, one representative recounted the experiences of grad students who had spent as long as three hours trying to reach SafetyWalk.

Such demand for SafetyWalk stands in marked contrast to the service’s use in previous years.

Former SafetyWalk staffer Andrew J. Miller ’04 said that when he worked for the organization, it received few calls.

“During the course of the year, three people called during my shift,” Miller said. “[Staffing the phones] seemed like a waste of an evening.”

Miller said that he did not know the current status of the organization.

SafetyWalk’s services are currently advertised to students on fire doors and blue light security phones as well as in HUPD’s Guide for Keeping Safe at Harvard and in the Guide for the Class of 2007 published by the Freshman Dean’s Office.

Much of the information provided about SafetyWalk in these resources is conflicting, inaccurate or long out of date.

For example, the Guide for the Class of 2007 provides long outdated information about SafetyWalk’s location and hours of operation.

Some resources—including some stickers on House fire doors—list the wrong number for SafetyWalk. The number listed reaches an office at the Semitic Museum.