Mahan and running mate Blickstead will run council next year 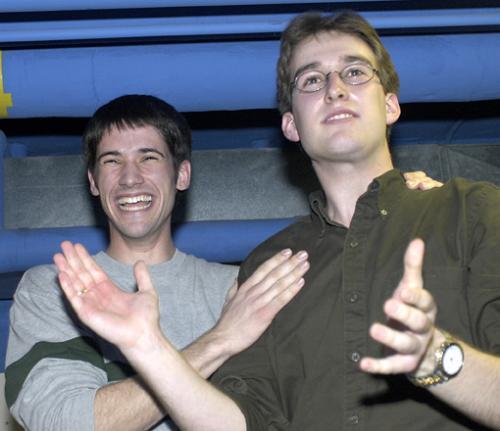 Undergraduate Council veteran Matthew W. Mahan ’05 was declared the next council president last night in an election decided by a much smaller margin of votes than last year’s race.

With a campaign platform mirroring many of Chopra’s priorities, Mahan and Blickstead—who with a combined 10 semesters of council experience were the most experienced of the tickets—pledged during their campaign to push for a student center and later party hours.

Mahan and Blickstead are not expected to steer the council from Chopra’s focus on student services such as funding parties and later keycard access to Houses.

Only 3,077 students voted in the election, compared to 3,266 in last year’s presidential election.

Mahan and Blickstead received the news of their win in person by members of the Election Commission, which supervised the race.

The runner-ups were called and informed of the results.

Wearing official “Election Commission” jackets, members of the oversight body gathered in front of John Harvard statue at about 10 p.m. and headed to the headquarters of the Mahan-Blickstead campaign in the Kirkland Grille.

About 100 Mahan-Blickstead supporters joined the candidates to hear the news.

The Mahan-Blickstead supporters screamed and chanted “Mike and Matt,” once they learned of the win.

For the second year in a row, the Harvard Glee Club, donning tuxedos, serenaded the winner with “Domine Salvum Fac,” a song that requests divine protection for a president.

Mahan and Blickstead were handed official certificates of election, which they held high in the air.

Mahan and Blickstead stood on a table to address their supporters.

At first, Mahan appeared to be speechless, but Blickstead took the lead.

“We’re so excited. We’re going to bring it to the next level next year,” Blickstead screamed.

Chopra and current council vice president Jessica R. Stannard-Friel ‘04 were present in Kirkland for the announcement.

“Last year when the two of us won, I never thought I would say this again, but the best is yet to come,” Chopra said.

One by one, members of their campaign staff joined them on the table as Mahan and Blickstead hugged them and thanked them for their hard work on the campaign.

Last night, presidential runner-up Byrd said that he “loved every single one” of his friends and supporters and that he would overcome the disappointing loss.

“They can’t break me ‘cause they didn’t make me,” he said, quoting boxer Rubin “Hurricane” Carter.

“We’re very grateful to everyone who helped us during the campaign. We wish Matt and Mike the best of luck,” Barro wrote in an e-mail to The Crimson.

Lurie, who ran alone for president, sent an e-mail to the council list congratulating the winners, but adding that he did not think Mahan and Blickstead had a clear mandate from the student body.

In the e-mail, he suggested that they look to their opponents platforms “for guidance and prioritizing your own platform points.”

Mahan and Blickstead will take office in January.

“We can’t wait to get started,” Mahan said. “This next year is going to be amazing.”

—Staff writer Ebonie D. Hazle can be reached at hazle@fas.harvard.edu.