With plastic wrap and rap, five vye for pageant title 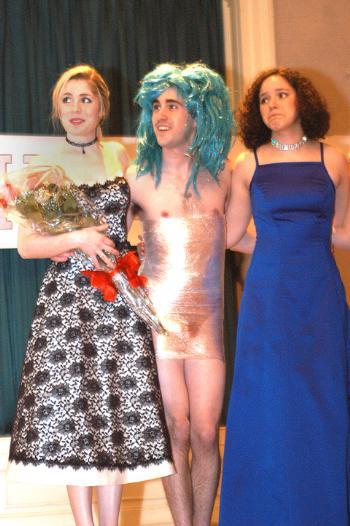 A tap dancing and whistling first-year was crowned the second Miss Harvard at the mock pageant—marked by a cellophane evening dress, a dance featuring mouthwash and fake accents galore—held in Leverett House Dining Hall Friday night.

Allison C. Smith ’06 prevailed in the competition of five contestants—three first-year women and two junior men—after jockeying for the crown before a judging panel composed of three faculty members.

Although the men dominated last year’s pageant, female competitors made a clean sweep of this year’s awards.

In addition to Smith, Laurel T. Holland ’06 and Caroline E. Jackson ’06 were the first and second runners-up, respectively, and Holland was voted “Miss Congeniality” by her fellow contestants.

The student group IMPACT ran the pageant as a fund raiser supporting grassroots charities in Nepal, Kenya, Gambia and China, and according to IMPACT President Oliver Soong ’04, the event brought in just over $400.

The format of this year’s competition mirrored that of a traditional beauty pageant, with judged categories including beachwear, talent and a short interview.

But according to Miss Harvard 2002, William L. Adams ’04-’05, Friday night’s judges were instructed to vote based on the contestant’s ability to entertain rather than on “antiquated norms of beauty and femininity.”

For the talent competition, Smith—clad in a sparkling black gown—sang “I Whistle a Happy Tune” from the Academy-Award winning musical The King and I, amusing the audience with a short tap dance and her overblown attempts to whistle.

For the beachwear portion, Smith came on stage wearing a bathrobe instead of a swimsuit, explaining that she usually prefers to go to the beach nude.

Holland, or “Miss Congeniality,” put on a French accent throughout the pageant, blowing kisses to the audience and repeatedly calling out “Merci! Merci!”

The emcee had to stop Holland from taking off her black swimsuit for the beachwear competition, explaining that Americans do not generally go to the beach nude.

The two male competitors, Hunter A. Maats ’04 and Daniel C. Craig ’04, entered the contest under pseudonyms, and were the first to drop out.

Maats, or “Pearl Scruggs,” spoke in a lilting Southern accent and wore a red and white checkered shirt and a jean dress.

He started his talent performance by playing a banjo, but broke a string early on and instead rapped about Tennessee.

Craig, or “Billy Dee Adams,” wrapped himself in cellophane plastic for the talent competition—for which the contestants were supposed to don formal attire—and performed an “oral hygiene” dance which left the entire room smelling of mouthwash.

Adams, also a Crimson editor, set the comic tone of the evening as the special guest co-host. He was introduced as “Anita Mann,” but quickly insisted on changing his name to “Igotta Mann,” saying that he had found a boyfriend.

“My name is Igotta Mann now, because I got one now,” he said.

He said that, since winning the pageant last year, he had acted in a movie called Crouching Tiger Hidden Drag Queen. He also complained about having failed with his “world peace” platform, and said that he came back sore from visiting American troops in Afghanistan, who he said had not seen their wives in a long time.

“Always persist in the face of adversity. Never mix brown and black. Use a lot of lubricant,” Adams advised this year’s competitors. “And never deny who you are, unless it gains you social and economic advantages.”

After the competition, Adams said that he “felt a lot lighter without the weight of the crown.” Although his title of Miss Harvard 2002 was unofficial, he said that he had been interviewed by the Wall Street Journal Online and other publications, invited to speak at an AIDS rally with Miss Universe 1998 and participated in the Hasty Pudding Woman of the Year parade.

Absent from this year’s pageant was the controversy surrounding last year’s event, when some students voiced concerns about the way beauty pageants portray women.

“There were some people who assumed that it was going to be something stereotypical, but they didn’t realize that it would be a mock pageant,” Soong said of last year’s contest. “We tried very hard to be sensitive to women’s issues while still making a good show.”

“We were worried that something similar would happen again, but we didn’t hear any complaints,” he added.

This year’s event was not as well attended as the inaugural Miss Harvard contest, nor as financially successful.

In contrast to the capacity audience drawn by the 2002 event, which was also held in Leverett, the crowd at Friday’s contest filled about half of the dining hall.

But Soong said in an e-mail that he expects IMPACT will stage the pageant again next year.