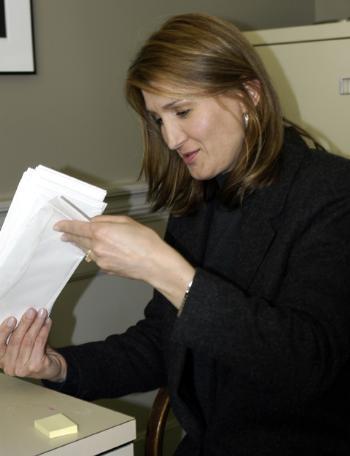 Nicholas P. Orenstein ’05, was not only placed in his father’s first-year entryway but was also lotteried into Kirkland, his father’s former abode.

“It’s meaningful for me and to my father that I got placed into his freshman entry,” says Orenstein, “I thinks it’s important to Harvard’s history that coincidences like this can happen.”

Cases like Orenstein’s seem to abound. Some take on mythic proportions and lead to paranoia among Quad-fearing first-years who remember that their mother lived in what was then North House and is now called Pforzheimer House.

And every year, a handful of Cambridge natives make desperate pleas to the housing office in an effort not to get placed in the House next to their childhood home or elementary school.

Following the example of his best friend’s sister—currently a senior in Winthrop House—Jake W. Hannon ’06 wrote a letter to the housing office requesting not to be placed in the Quad, which is right around the corner from all of his childhood hang-outs.

“If I lived in the Quad I’d pretty much see the past 18 years of my life every day,” he said.

But David Woodberry, the College housing officer who runs the lottery, says that regardless of childhood home, legacy or attempted alumni intervention, the process is completely random. He says the process controls only for the sex of the students in order to achieve balanced Houses.

Woodberry says he fields a handful of phone calls from students making last-minute desperate attempts to get into the House of their choice.

While he sympathizes with their position, Woodberry says, he does not make any changes to the lottery.

“There are only two exceptions we make for people in the Housing Lottery,” Woodberrry said.

The first is for students who receive a recommendation from the student disability office to get into a House with special facilities.

“There are some disabilities which some Houses can accommodate, but even among those options, the end result is randomized,” Woodberry says.

The second exception to randomization occurs when the Freshman Dean’s Office sends him a letter stating that certain blocking groups should not be placed in the same House. But these requests are rare, Woodberry said.

Woodberry said that even students whose parents are in residence in one of the 12 Houses cannot make a special bid to have their placement changed.

Caroline E. Jackson ’06, whose parents are visiting scholars living in Lowell House, said she would “rather in live in Dunster” than live in the same House as her parents.

“Don’t get me wrong, Lowell has cool stuff, including my parents, but I would probably go with Dunster because the point of college is to get away from home,” Jackson said. “It would actually be a little unnerving to go to dinner and see them.”

—Staff writer Maria S. Pedroza ’04 can be reached at mpedroza@fas.harvard.edu or at John Winthrop House.