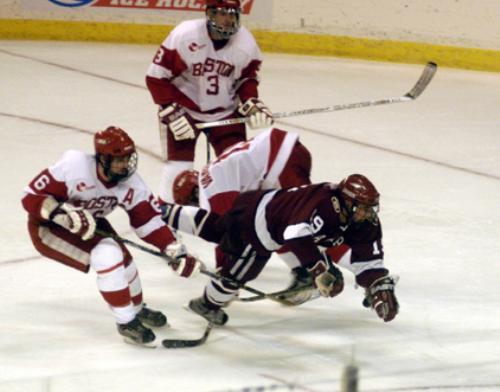 Freshman CHARLIE JOHNSON (19), who saw regular time with the second power play unit, is tripped up by Terrier stick work in NCAAs.
By Elijah M. Alper, SPECIAL TO THE CRIMSON

ALBANY, N.Y.—It was just too much of a fairy tale to repeat itself.

Injured junior forward Tyler Kolarik, a last-minute addition to the Harvard men’s hockey team’s lineup, had scored an improbable goal to put the Crimson ahead of Cornell 2-1. Separated shoulder and all, Kolarik was just seconds away from a dramatic repeat of last year’s playoff heroics, with yet another game-winner over the Big Red in the ECAC finals.

And then suddenly Cornell tied it with 30 seconds left in regulation. Less than two minutes into overtime, Crimson-killer Sam Paolini gave the Big Red the win.

Paolini’s second goal of the game gave Cornell the ECAC title in Albany, N.Y., March 22, as the No. 2 Big Red came from behind to beat No. 12 Harvard 3-2 in a seesaw battle every bit the equal of last year’s magical Crimson victory.

“This team remembered what happened last year against Harvard in the championship game,” said Cornell coach Mike Schafer. “They carried that will and that determination and focus with them for 365 days. I couldn’t be more proud of this hockey team.”

The Big Red (28-4-1) earns the Whitelaw Trophy as ECAC champion with the win, but both teams advance to the NCAA tournament, which begins next weekend. The Crimson (22-9-2) clinched an at-large bid March 21 with its semifinal win over Dartmouth and the Cornell result does not affect Harvard’s seeding.

What was a tense defensive battle exploded into high drama late in the third period. Ten minutes after Crimson captain and forward Dominic Moore tied the game at one, Kolarik capitalized on a tremendous individual effort by senior forward Brett Nowak, who fought off several Cornell defenders before sending the puck to Kolarik, who deflected it in at 16:14 of the period.

Kolarik’s goal silenced the heavily pro-Big Red crowd, which couldn’t bear the thought of losing another ECAC heartbreaker to Harvard. The fans were ghastly quiet with just over 30 seconds left to play, when Nowak sent the puck trickling toward the empty Cornell goal. The puck was on line to enter the net and end the game, but it hit a loose chunk of ice eight feet away and skidded wide.

Fate had stepped in, and the Big Red made the most of its second life, tying the game moments later on a faceoff goal by Mark McRae. It was a perfectly-executed set play, as the other Cornell players pushed all the action left while McRae beat sophomore goalie Dov Grumet-Morris just inside the right post.

Paolini scored the game-winner on a 2-on-1 rush after the Crimson had several opportunities in the opening moments of overtime. His goal was eerily reminiscent of the early overtime goal scored by Maine’s John Ronan to beat Harvard in the NCAA Tournament last year. Paolini launched his shot from the same place on the ice as Ronan and beat Grumet-Morris in the same place, just over his glove.

“I just shot it as hard as I could,” Paolini said.

But where last year’s overtime loss ended the Crimson’s season, this year Harvard lives to skate another day.

“To be honest, this game hurts right now, but our goal since the beginning of the season was to make it to the Frozen Four, and that goal’s still intact,” Moore said. “I’m going to have a smile on my face when I leave this building tonight because I’m going to be looking forward to next weekend.”

Harvard had reason to be pleased with its late-game performance despite giving up the final two goals. The Crimson nearly won the game despite trailing going into the third period—Harvard had been 0-6-1 this season when behind after two. That the near-comeback came against Cornell is especially surprising. The Big Red had never fallen behind when leading in the third during sophomore goaltender David LeNeveu’s collegiate career.

It was déjà vu for a third time early on, as Harvard fell to the same patter that had led to the Big Red’s sweep of the regular season series. It took less than a minute for Cornell to get on the power play, and less than two minutes for the Big Red to notch the game’s first goal. Fittingly, Paolini opened the scoring, deflecting in a Stephen Bâby slap shot. In three meetings with the Crimson this season, Cornell scored the first goal in the opening two minutes each time.

Harvard spent much of the first period trying to recover from that first goal. The Crimson seemed unsure with the puck, hesitating to shoot or pass, especially on the power play. Still, Harvard avoided the first-period onslaught that doomed the team in its February loss to the Big Red and skated into the locker room down just a goal.

“We were just trying to stay positive,” Kolarik said. “It’s tough when they get a power play right of the bat, and then they got the goal. We just dug in our heels and responded really well.”

The Crimson looked much more comfortable starting in the second period, a stanza it controlled despite not scoring. Referee Scott Hansen waved off two Harvard goals in the period, one when he ruled the net dislodged early and another coming off a premature whistle. Hansen also disallowed a potential second Cornell goal in the first period.

Mazzoleni said he had no problem with any of the decisions, calling Hanson “our league’s best” official.