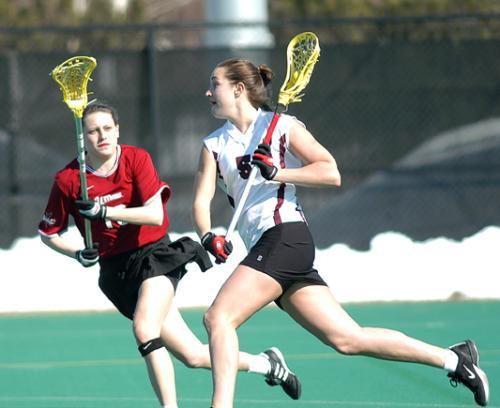 No squad welcomes halftime more than one playing the Harvard women’s lacrosse team.

The Crimson’s second-half struggles continued during a spring break trip to California, as Harvard (1-5, 0-1 Ivy) let games against California and No. 18 Stanford slip away after intermission and lost 7-6 and 10-6, respectively.

The Crimson has been outscored in every second half so far—in total, opponents hold a 31-15 scoring advantage after the break.

“We start to play kind of timid,” said junior goaltender Laura Mancini. “When it’s so close we don’t want to take big risks, and we’re afraid of making mistakes. We wait around too much instead of taking a more active role. And unfortunately that’s not the way to win a game.”

The March 23 loss to California (8-2) was the hardest to take. Despite Cal’s gaudy record and rank, Harvard had plenty of reason to be confident entering the game—the Crimson destroyed the Golden Bears last year, 11-2, at Jordan Field. And when Harvard jumped out to a 4-0 lead, it looked like the team would once again cruise to a victory.

Cal mounted a comeback early in the second half, closing to 5-4 with 11:49 left to play. But sophomore Casey Owens appeared to seal the Crimson win, scoring with just 6:32 remaining.

Yet Harvard couldn’t hold on. The Golden Bears scored twice to tie the game, then gained possession in the final minute. Cal ran the clock down before Julian Wu dealt Harvard a heartbreaking defeat with just 12 seconds remaining.

“Physically we definitely outmatched them, but mentally we weren’t able to pull it through,” Mancini said.

Harvard showed no ill effects of the disappointing defeat two days later against Stanford (6-2). The Crimson played its best half of the season in staying right with the heavily-favored Cardinal. Despite entering intermission down 5-4, Mancini said Harvard’s first-half performance was the bright point of the week.

“Everybody just wanted it,” Mancini said. “We were going hard, our attack was just great and our settled defense was just great, too. Out intensity level was higher than it has been in other games.”

The Crimson looked like it might have solved its second-half woes in the opening minutes after intermission, as it turned a one-goal halftime deficit into a 6-6 tie with 20 minutes remaining. But the Cardinal exploded for four goals—most of them in transition—to end any Harvard upset hopes.

The loss spoiled a tremendous effort from co-captain Katie Shaughnessy, who scored four goals and added an assist against Stanford. It was her highest scoring output since she notched seven goals against Columbia last year.

Harvard plays the last of five consecutive road games Wednesday when it takes on Boston University. The Crimson then enters the meat of its Ivy season on Saturday when it hosts Yale.

—Staff writer Elijah M. Alper can be reached at alper@fas.harvard.edu.