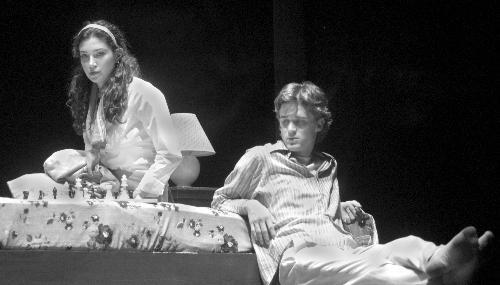 At some point during Chess, directed by Kathy M. Bencowitz ’03, someone on stage turns to someone else and says, “This would be funny if it weren’t so serious.” Or something similar—what with the malfunctioning microphones, it was really hard to hear what was going on. Regardless, the line—though referring to the conflicting currents of romance, megalomania, Cold War politics, and the game of chess that are the stuff of the plot—can easily serve as a comment on the production itself, the mediocrity of which defies the talent of the actors involved and the big-budget prestige of the Loeb Mainstage.

Quickly, credit where credit is due: the ABBA-scored musical is orchestrated well, the violin and keyboard work is noteworthy and the choreography is very sound. The vocal ability of the cast is impressive, and the female lead Rebecca J. Levy ’06, as Florence, is uniquely superb. Benjamin D. Margo ’04 -’05, who is also a Crimson editor, sings well and acts competently as the Russian chessmaster Anatoly Sergivesky, though less could be said of Travis Nesbitt in the role of his childlike American counterpart, Freddie Trumper. Nesbitt, though excellent when dancing, projects poorly, and in dialogue overplays his gestures to the point of ridiculousness. Bobby A. Hodgson ’05 does a very good job as Walter Anderson, a CIA agent masquerading as Freddie’s agent, and Nicholas R. Adams ’03 and Matt J. Weinstock ’05 do well as the KGB details assigned to Sergievsky.

But there were problems. The Loeb’s awful acoustics vied with constantly failing audio-pickups in warping nearly every other line of dialogue, and lyrics were rendered completely inaudible. This may not have been an entirely bad thing, given the atrociousness of Richard Nelson’s book (“stick to the chess, Freddie, the Russian’s aren’t as stupid as you think”) and the breakneck speed with which most actors spat out their lines. Every cast interaction seemed marked by a distastefully palpable anxiety that ruined pacing and left character motivations as inexplicable as the plot’s movements were incoherent. It was impossible to avoid the impression that no one on stage was having a good time—I in the audience certainly wasn’t.

The night did have its moments, though. A superb duet between Frances and the underutilized Svetlana (Shannon Amiry), everything involving the excellent chorus—the mournful bit that kicked off the second act was especially good—and the scene in which Frances encounters her long-lost father all stood out. Likewise, the solid set design and evocative lighting resulted in some starkly beautiful vignettes.

But attractive tableaux alone do not a quality production make, and far more obvious than the rare stretches of chemistry were sequences that tried to be winning and fizzled miserably. In particular, in the mediocre “One Night in Bangkok” number, high-quality choreography fought a losing battle against excessively loud orchestration and an evident lack of enthusiasm on the part of the actors involved. The resulting mess—where provocatively dancing cast members sang feedback-plagued gibberish punctuated only by the (tragically clear) refrain “one night in Bangkok, and the world’s your oyster” was hilariously bad.

It is hard to know who to blame when a production goes this wrong. That misguided directing is accountable for the show’s embarrassing failure to exploit the manifest talents of its participants (all of whom, in other contexts, have acted extremely well), goes without saying. But it is probably more productive to wonder why the Harvard-Radcliffe Dramatic Club, understandably attracted to the flashy high-concept behind Chess (and mind you, it could have turned out great) didn’t step in to abort the venture before the debacle could unfold before a paying audience. Mainstage productions, though they rarely gel, should nonetheless be held to high standards, and a stalemate like Chess should probably have been forfeited in its early moves.