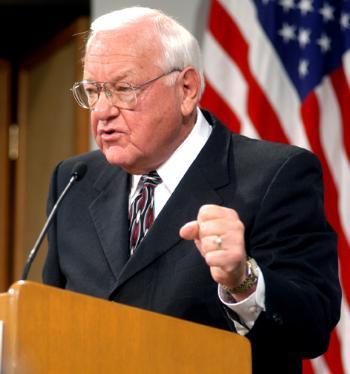 The death penalty is “arbitrary, capricious, racist, unjust and unfair,” according to former Governor of Illinois George Ryan, who spoke at the ARCO forum last night.

An audience of around 100 attended the speech, where Ryan spoke on the issue that made him famous when he commuted the sentences of all of Illinois’ 167 death row inmates before he left office in January, and completely pardoned four who had given confessions under torture.

He said his decision “was the only thing I could do. It was the right thing to do.”

“Our system should either be repaired or repealed,” he said, “and I’m not sure it can be repaired as this point.”

Ryan was governor of Illinois from 1999 to 2003, during which time he said he grew increasingly anguished over the capital punishment process.

Following the exoneration of 11 of the Prairie State’s death row convicts, Ryan decided in January 2000 that the Illinois system was too flawed to keep functioning.

“I said ‘We’ve got to stop the killing now’ and called a moratorium,” he told the crowd, sparking hearty applause from the audience.

Now retired from his former office, Ryan has stepped up his advocacy of death penalty reform.

Last night’s talk was part of a cross-country tour to raise awareness and interest in the issue, he said.

“You have to get thinking people to think and be involved in it,” he said, “that’s my mission and my charge.”

He emphasized the need for more people to understand the issue in greater detail.

“Most people in my town, like me, never had a reason to discuss the death penalty,” Ryan said, adding that nobody had ever asked him in his various campaigns where he stood on the death penalty.

As a state legislator, Ryan voted to reinstate capital punishment after the U.S. Supreme Court ruled it constitutional in 1976.

He didn’t want to “throw the switch” himself, he said, but thought it was an important part of the criminal justice system.

The issue started weighing heavier on his mind, he said, when he became governor.

Once elected, “I became the executioner,” he said.

Ryan said that as he learned more about the system and its failures, he became increasingly pessimistic about its moral and societal worth.

Looking at the current national situation, Ryan said that there are no attempts to make the system better. People are even attempting to undo his actions as governor.

“As we speak,” he said, “my decision to commute is being challenged by prosecutors.”

Ryan spoke emphatically throughout his address, occasionally banging his fist on the lectern for emphasis.

He said that to be worth preserving, the system must be “fair, equal, just—that’s the American way.”

“This is a matter of life and death,” he told the crowd.