A Two-Week ‘Stopover’ in the Loeb Ex

ArtsMonday: Carmichael brings her tale of four young women and paintball warfare to the stage 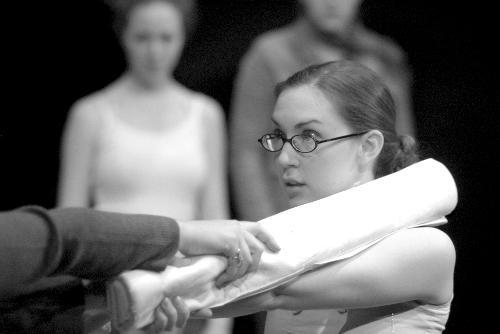 Emily J. Carmichael ’04 looms above her creation, as the cast and crew all point to her and clap. “Wait a second, we’ve got to get our writer and director,” one of the actors declares to the audience, as the entire group onstage runs off to grab her. The next thing you know, she’s in the air, being carried like a rock star through the theater.

For two weekends in a row, Stopover has taken over the Loeb Experimental Theater (Ex), charming audiences with the tale of four college students who have 24 hours to make the most of Paris. The second production this year written and directed by Carmichael, it has her fingerprints all over it. The actors, a lively musical soundtrack and an other-worldly paintball sequence combined to create a campy sister story of travel and friendship.

The largely freshman cast—with three first-years in the four starring roles—gives the show its underlying energy. Onstage, the girls’ enthusiasm comes across clearly, as Aoife E. Spillane-Hinks ’06 gives an endearing performance as the compassionate caretaker and Alex H. Bush ’06 is perfectly deadpan in her comic delivery.

In her capacity as a writer and director, Carmichael took suggestions from all her actors, asking for feedback and even giving them new versions of the script post spring break.

Yet even with this collaborative effort, the script was undeniably Carmichael’s, reminiscent of her The Impossibles, performed at the Playwright’s Festival in the Adams Pool last semester. As a writer, she tends to employ characters with an academic background who analyze their relationships in depth and include esoteric facts in conversation. Much like Carmichael herself—who is known for reciting full-length poems in everyday life—the characters offer insights into art history, sociology and literature as they go about their vacation.

For the most part, the dialogue in this production sounds more natural thanks to actors’ suggestions, and the references work well the more they relate to actual situations. For example, one character complaining of a cold offers that “Innuit grandmothers will suck out your nose for you.” Still, some of the observations seem a little too forced, particularly as a shortcut to revealing character by suggesting artistic sensibilities.

Yet Carmichael, who has worked on a production of Macbeth with puppets in the Adams Pool, shines when she sticks to her absurdist leanings grounded in a familiar setting. For example, there is a wonderful scene with a glowing bottle of absinthe, and another with “human art” in the Louvre dancing to oldies. She also creates a fantastic alternate universe of guerrilla paintball warfare, complete with excellent choreography that is a pleasure to watch.

This fresh, vibrant presentation picks up the latter part of the play—while the beginning’s hostel sparring and predictable play-fighting is almost as stale as the baguettes the girls poke each other with. Throughout the production, a lively musical soundtrack keeps the energy level up, from Cake to Eminem to Supercat, adding to the cinematic quality of the scenes.

A few literary conventions do constrict the writing on occasion, beginning with the rigid stereotypes of each character. The audience feels somewhat beaten over the head with repetitions of “you’re so dull” and “you’re so crazy” between two opposing characters in a formulaic character foil. The sullen girl’s continuous moping and the irrepressible cheeriness of her friend become overwhelming about ten minutes into the production.

The best writing occurs when Carmichael uses her literary license to explore the world she has created. The flat Dharma and Greg dichotomy is best executed in the paintball sequence, when the free spirit exclaims in frustration, “Just, for once in your life, be the type of person who can deactivate the hypermatrix flux equivocator!”

And the audience gets to see the natural homoerotic subtext played out with an audience-pleasing lesbian kiss at the end of the first act. Unfortunately, Carmichael backs off of any of the kiss’s implications in a very “Jessica Stein” way, returning us to their prior platonic friendship immediately afterwards.

All in all, though Stopover has finished its run in the Ex, Carmichael’s mark on Harvard theater is surely here to stay even as the set comes down.