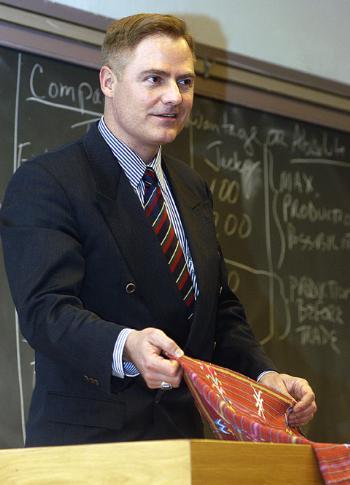 TOM PALMER, a senior fellow at the Cato Institute, displays an Indian garment while talking about the benefits of free trade and globalization.
By Alexander J. Finerman, Crimson Staff Writer

Globalization “creates incentives for harmony and peace, which is about as good as we can do in this life,” Tom Palmer, a senior fellow at the Cato Institute, told a crowd of 50 that gathered yesterday for a discussion sponsored by the Harvard Libertarian Society.

Palmer laid out an argument in favor of globalization and free trade and addressed many of the criticisms leveled against it in his talk, which was also sponsored by the Institute for Humane Studies and the Cato Institute, two libertarian think tanks based near Washington, D.C.

According to Palmer, globalization boils down to the question, “should the political border decide whether exchange should be blocked, or not?”

For Palmer, the answer is a definitive no.

“Through trade, we can consume more than we can produce,” he said.

Palmer rebutted arguments that globalization “exports” jobs to poor countries and promotes a “race to the bottom” where poor countries compete for capital by offering worse working conditions.

Foreign capital and plum manufacturing jobs do not go to the countries with the lowest wages, he said. Rather, investment travels to where labor productivity is high, and this is where wages are higher and workers happily give up part of their wages to pay for better working conditions.

Every generation thinks that the youth culture of its successors is venal, he said, adding that “Ralph Nader and Pat Buchanan should wake up and realize they are old.”

Palmer also said that the notion of a cultural purity that must be preserved is “a myth,” and all cultures are a product of mixture, adopting and adapting.

For Palmer, anti-globalization activists are missing the bigger picture.

Bolstering his argument with evidence from the Classics, Palmer read a passage out of Homer’s Odyssey and said that Homer is telling the reader that “the cyclops is a savage because he doesn’t trade.”

“He lives in the preferred world of the anti-globalization activists,” he said.

Palmer used an anecdote about Mayan women in Guatemala to further illustrate his characterization of anti-globalization activists.

“For the first time in history,” he said, “the labor of an Indian woman has increased in value.”

It is better for the women to produce traditional clothes for sale abroad, from which they earn enough to buy five modern outfits and new things such as eyeglasses and medicine.

“The group that has been worse off [from globalization],” he said, “are the poverty tourists.”

Palmer cited evidence to draw a correlation between openness to trade and freedom.

He said that according to Freedom House statistics, 90 percent of those living in the top 40 percent of countries in terms of economic opennesswere classified as free, and not one was unfree.

“Every time you add more people engaging in exchange,” he said, “you create more incentives for peace.”