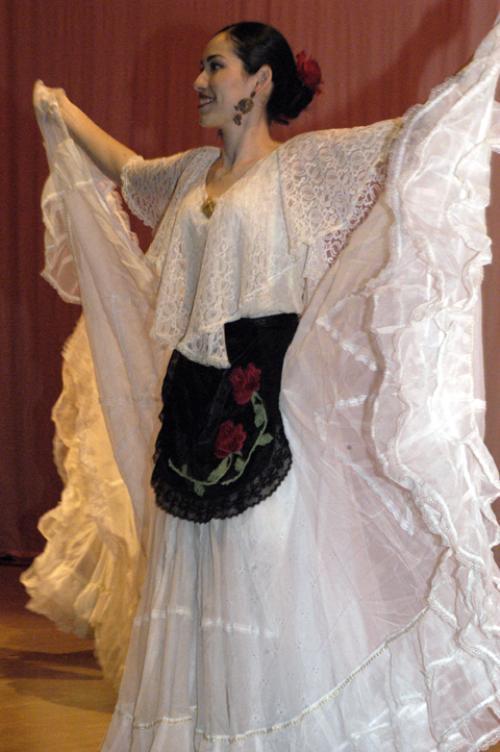 The first-ever “Presencia Latina” cultural show combined food, music and dance this past Friday night in what organizers called the kickoff of a campaign to raise awareness about the Latino community at Harvard.

Organized by a triumvirate of Latino campus organizations—RAZA, Concilio Latino and Fuerza Latina—the event drew Harvard students and members of the Greater Boston community to a crowded Lowell Lecture Hall.

It was the first in a series of events geared towards making the substantial Latino community a more visible, united presence on campus, organizers said.

Orta described how in the past personal differences between the leaders of some of the groups prevented the type of cooperation that Presencia Latina required.

“This wouldn’t have happened if there had been a rift in the community,” says Orta. “That the event took place shows that we’re all getting along with one another.”

Leyla M. Bravo ’05, president of Fuerza Latina, said that Friday’s event was also important in that it brought together Latinos of a variety of backgrounds.

As Latino organizations represent students from the Caribbean and North, Central and South America, there is a large potential for splintering into smaller national sub-communities.

Whereas in the past smaller scale efforts had been made, Presencia Latina was indicative of the greater audience the united Latino community wants to reach, Bravo said.

“Presencia Latina is a showcase for the very diverse Latino population on this campus,” said R. Gerard McGeary ’04, a performer with Candela, a Fuerza Latina dance group. “It brought a lot of different Latino groups on campus together.”

Organizers said they hope that in presenting a more unified front, the Latino community groups will have the same type of presence on campus as groups like the Black Student Association.

Participants also said the event served a purpose in reaching beyond the Latino community.

“Presenting cultural events to people like myself, who are not Latino, and who are interested in the culture...helps the Latino community become stronger,” said Nicole M. Laws ’06, one of the event’s two emcees.

The show began with an introduction by Allyson K. Reaves, the current Miss Boston. “I invite students here at Harvard and the organizations that have put on this program to aid me in my own personal mission,” she said, “to bring diversity, appreciation, and understanding to the forefront of the Boston way of life.”

The acts that followed ranged widely from poetry readings to fast paced dancing and instrumentals, with heavy audience support throughout.

A performance of a well-known Ranchera, “Tú, Solo Tú,” by Mariachi Veritas, a student band, led the audience to break out into song.

Audience members also danced along with Sumaj Chasquis, a Bolivian band who performed both pre- and post-Spanish conquest era tunes.

Harvard students were the primary participants in the show, but members of the greater Cambridge and Boston community participated as well. Outside involvement included a performance of Capoeria, an Afro-Brazilian dance and martial art, by members of the Associacao de Capoeria Mandinguerios dos Palmares, located in Central Square. Their Performers ranged from children to middle-aged men and women.

Another participant from the greater Boston community was La Piñata, a children’s dance group which performed merengue, samba and maculele. Spectators on Friday night rewarded the group with a standing ovation.

Following the event, Latin American food donated from area restaurants was served in the Greenhouse at the Science Center.

Timed to coincide with the arrival of hundreds of pre-frosh, participants said the celebration would make a good statement to undecided students.

The Presencia Latina show was followed a day later by a Latin American food festival in Quincy dining hall.

Dishes ranged in origin from many Latino cultures, and while cooked by dining hall staff, were planned by a chef from the cable channel Food Network.

Zach S. Ramirez ’05, wondered if pre-frosh were getting an accurate depiction of what Harvard life is really like. “If I were a pre-frosh and I saw this, I’d be sold,” he said of the cultural events during the weekend, “But it isn’t like this the rest of the year.”

But Bravo said that the cultural show was only the beginning. “This may be the first time [Presencia Latina] has happened, but it’s definitely not the last,” Bravo said, adding that Presencia Latina will be back for a second run next year.