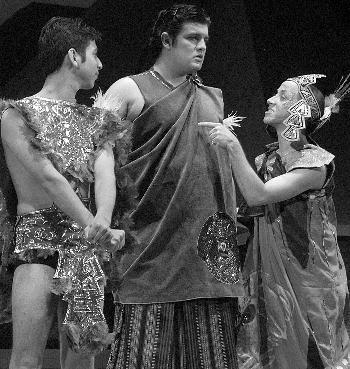 Under the direction of Kenneth P. Herrera ’03, Richard III presents a world of treachery and deceit within Aztec times, a classic tragedy to the beat of tribal drums. To some, the colorful costumes on stage might seem cartoonish, and to others, they may suggest the universality of Richard, but one thing is for certain: Shakespeare has never looked this good.

In an extended opening dance, we are greeted by feathered headdresses, multicolored loincloths and bare-chested beauty. While worthwhile for aesthetic reasons alone, the fiery costumes designed by Jane H. Van Cleef ’06 do well to reflect the heated words exchanged onstage and keep the show’s intensity high. The costumes even manage to contribute to the play’s characterization—as when King Edward emerges in mirrored garb that partly blinds the audience and partly reflects its image back. It’s coupled with exquisite makeup that creates deformity in Richard and the effects of aging in Queen Margaret.

The infectious drum beat is more than just background music; it intensifies as the onstage treachery grows. Its presence is highly appropriate, given the bit of dialogue that tells us how the players “make war against themselves.” Comparing the concept of tribal war with the political factions and split loyalties within government works well for Herrera, as does the culture of death represented by the hanging skulls of the set. And the pyramid structure of the set, which functions as the site of the murders, suggests the history of a society filled with such bloody plots.

On the other hand, the use of human sacrifice as a mask for the arguably ritual murders of Richard doesn’t translate as smoothly as the play would have us believe. The religious ceremonies that were historically performed on prisoners of war don’t make much sense when used as a tool against nobility, no matter how striking they appear as a spectacle.

And such devices seem unnecessary, since the starring actor is enough of a spectacle on his own. With hulking guards surrounding him at all times, Brendon T. DeMay ’03 projects a tremendous stage presence as the conniving Richard, drawing the audience into his calculated ravings. Kathleen A. Stetson ’03 also gives a stately performance as Queen Elizabeth, though Sergio Rafael ’05 is a bit stiff as Clarence. His unassuming presence may be intentional to create a guileless veneer, but he comes off as somewhat uncomfortable with the noble role.

Some cross-casting, as in the case of the female Lord Hastings, is refreshing, though Carla M. Borras ’05 plays the role almost as if she’s trying to emulate the mannerisms of a male. Had she moderated her brash performance it would have maximized the effect of her contradictory casting.

Overall, though the production can be construed as overly flashy or a mere attempt at Shakespearean pulp, that flashiness is what brings Richard III a fresh life on the Mainstage. And though it doesn’t take an adaptation set in an Aztec tribe to affirm the universality of Shakespeare’s drama, it does make for a wonderful spectacle.