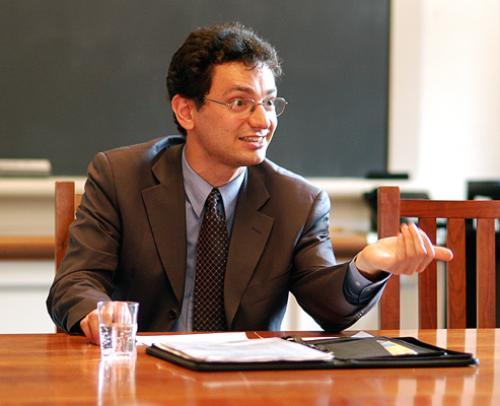 Former Senior Advisor to the French Minister of Labor NICOLAS VERON speaks at the Center for European Studies yesterday about the effectiveness of shortening the standard work week to 35 hours.
By Alexander J. Finerman, Contributing Writer

Despite criticism from detractors who dismissed it as counterproductive and preposterous, France’s new 35-hour work week has actually been extremely effective, a former French government official told a crowd of French expatriates, professors and graduate students yesterday.

“There is no doubt, the French are much more productive per hour than the Americans,” said Nicolas Veron, a former senior advisor for corporate matters to the French Minister of Labor and Deputy Prime Minister, in a speech entitled “Let Them Have Leisure: The French Experience of the 35 Hour Work Week.”

“When you have a high level of unemployment,” Veron said, “working time becomes more of an issue.”

French unemployment was high throughout much of the 1990s, which led policymakers to search for unconventional solutions, he said—adding that legislation to shorten the work week was not unprecedented, as the U.S. enacted similar measures during the Great Depression.

Veron also cleared up a common misconception about the current French policy, explaining that the 35 hours is not an absolute limit, but rather the point at which overtime pay starts.

“It’s not a prohibition of more working time,” he said, “it’s just a way to get companies to pay more overtime.”

After debate started in the early 1990s over whether a shorter work week would bring about a reduction in unemployment rates, members of France’s Socialist party repeatedly tried to pass legislation creating the 35-hour work week.

They finally succeeded in January of 2000.

To secure companies’ agreement to the plan, the government offered them a slower rate in government-mandated wage increases, a cut in the payroll tax and more “flexibility” in deciding when the hours would apply.

In theory, it was “kind of a win-win-win situation” for the employees, companies, and government, Veron said.

He said that the measures have actually been effective, with a reduction of the work week from an average of 39 to 36 hours per week.

He also said that “there is no evidence for loss or negative economic effects.” Instead, he said that from 1998 to 2002, France has outperformed the U.S. in terms of Gross Domestic Product per capita.

In 2001, as many countries were suffering from a drop in foreign direct investment, Veron said that investments flowing from other countries to France hit record levels, jumping by 26 percent.

Nevertheless, the legislation has been “a political failure in the end,” he said.

Prime Minister Lionel Jospin and his Socialist party, the largest advocates of the shortened work week, were trounced in the latest elections.

Veron said that he saw a “kind of a lack of continuity in the commitment of the Jospin team.”

And the Jospin team was not politically deceptive enough to sell the legislation in France, Veron said.

“The only way to reform in France is to say something and do another,” he said, calling it “reform by stealth.”

“France isn’t that different from the rest of Europe” in the number of hours worked per year, he said.

On average, Americans work 400 more hours per year that Europeans, he said, and if current trends hold the number will increase.

Even with the shortened work week, he said that France does not seem to be falling behind in terms of productivity.

The combination of these two trends “actually results in a high increasing productivity per capita.”

“I wouldn’t say French workers are the best in the world,” Veron said, “but there are mixed signals that go that way in competitiveness.”

The speech was held at the Center for European Studies and sponsored by the French Study Group and the Working Group on Social Democracy.