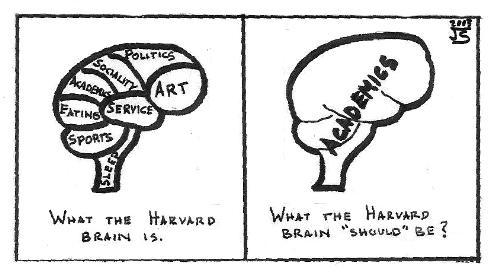 From house “randomization” to the Ad Board’s handling of sexual assault cases, the policy decisions of Dean of the College Harry R. Lewis ’68 have tended to elicit passionate responses. Detested by some, loved by others, Lewis certainly made his presence felt during his eight year tenure as Dean of the College. So, when news that he was abruptly asked to step down from his position broke last month, it was clear that the decision that would get considerable attention. As a Council representative, and therefore one of only a handful of people in my house that is actually interested in day-to-day administrative decisions, I was heartened to see students—even my apolitical roommates—expressing strong opinions about Lewis’ departure and what it might mean for student life.

But as much as we may miss the outgoing Dean—or cheer his departure, as some may—I am beginning to realize that unless you plan to take his computer science class next year, Harry Lewis is a non-issue. I fear that our interest in the forced resignation of Lewis the individual has allowed vastly more important issues to slip beneath the radar.

What students should be worried—indeed, angry—about is that the positions of Dean of the College and Dean of Undergraduate Education will be merged next year. Ordinarily, I would be all too ready to welcome some degree of centralization in this frustratingly atomized place, where deans’ and professors’ autonomy seems a higher priority than students’ needs. Combining these two positions, however, threatens to undermine Harvard’s distinctive extra-curricular culture, which appears to be University President Lawrence H. Summers’ and Dean of the Faculty William C. Kirby’s ultimate goal.

On a philosophic level, this merger represents a major shift in the way we think about education at Harvard. The most incredible aspect of Harvard’s undergraduate life is that much of the real learning occurs outside of the traditional classroom. Involvement in cultural groups, athletics, public service, political groups, and a plethora of other endeavors helps students develop the social skills, time management strategies, organization and dedication that their future aspirations will demand. Moreover, many of these activities, such as publications and the IOP, develop explicitly intellectual skills that are non-academic only in name. But, Summers vowed to end “Camp Harvard,” and Kirby, as he alluded to in his speech at Opening Exercises, thinks that students are “here to work.” By merging these positions as the College embarks on its curricular review, they have ensured that the new dean will be responsible for academics first are foremost, and everything else only as time allows.

The fact is that there simply are not enough hours in the day for the new dean of this merged office to give adequate attention to non-curricular aspects of College life. For example, it has been an integral part of Lewis’ job as Dean of the College to be involved in student-faculty committees, which are an indispensable venue in which students can press their agenda during the policy setting and revising process. As Dean, Lewis currently chairs eight committees and is a guest or a member of 19 others (as well as regularly attending ten staff meetings), from the Committee on House Life to the Committee on Public Service, which gives him regular contact with students and keeps him constantly thinking about the non-curricular issues that affect students’ everyday life. Dean Benedict H. Gross ’71, tapped by Kirby to assume the new position, will inevitably have to lay the burden of less critical student-faculty committee meetings (i.e. those that do not pertain to the curricular review that he took this deanship to oversee) on his assistant deans. But, in the end, Gross will make the non-curricular decisions too, meaning that most student representatives will be a step or two removed from the true source of power.

Unfortunately, access is just the tip of the iceberg. The sad truth is that Gross cannot possibly understand the intricacies of all the issues that currently fall under both deans. We have been assured that the curricular review and the Ad Board are top priorities and will therefore fall under the new deanship, but what does that mean for everything else? Will Gross and his successors remember that cable television and better shuttle service are top student priorities? Will they care about keycard access, our pitiful MAC, and student group office space? It seems all too likely that, instead, we will have to wait two years for the curricular review to end before the new dean starts thinking about these issues before we can address any of them. Worse yet, these concerns will probably be delegated to some other less powerful Dean who has no control over the purse strings

I have learned through my work with the council that very little gets done without the explicit approval of the Dean of the College or the Dean of Undergraduate Education. I worry that the merged position will require such a degree of prioritization that students will have to wage overtly political battles—not unlike the recent preregistration fight—to have adequate attention paid to their non-curricular needs. While this approach might yield favorable results on the few topics that excite the student body at large, a number of less popular, but nonetheless important, issues will slip through the cracks. But, should we even have to jump up and down to get the administration to consider our non-curricular requests? If the College is truly for students, it needs to recognize that academics only make up a small part of who we are.

Undoubtedly, various aspects of Harvard’s classroom instruction leave room for improvement. But if we want to improve education, let’s talk about advising, teaching, and the Core, all of which the curricular review will examine over the next two years. Subordinating non-curricular life to the classroom experience by putting all of the responsibilities of the Dean of the College under an individual who is primarily charged with leading the curricular review will only hinder Harvard’s ability to educate the whole person. It is becoming abundantly clear that our administration is more concerned with combating the sensationalized allegations of grade inflation than giving us the best possible education. To consolidate influence and advance a quite limited view of what it is to be educated, Summers and Kirby are making Harvard administration look like the U.S. Treasury’s vertical hierarchy. But students aren’t dividends, and regardless of what you think of Lewis, students are going to pay for this reorganization.

Matthew W. Mahan ’05 is a social studies concentrator in Kirkland House. He is chair of the Undergraduate Council’s Student Affairs Committee.