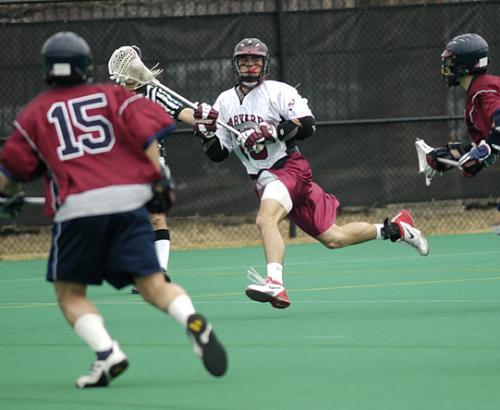 Sophomore attack MIKE McBRIDE (C) had a goal in the Crimson’s 6-5 loss to Cornell on Saturday. McBride is second on the team in scoring with 11 goals on the season.
By Timothy Jackson, Crimson Staff Writer

Eleven minutes away from an upset of No. 12 Cornell, the Harvard men’s lacrosse team could not hold off the Big Red’s powerful offense.

“We were really disappointed,” said junior attack Anders Johnson. “Cornell is at the top of the Ivy League with Princeton, and it’s frustrating because we could have had them. A few less errors and the outcome could have been very different.”

Harvard took a 4-3 lead at 11:38 of the fourth quarter on freshman attack Sean Kane’s seventh goal of the season.

It was the Crimson’s first lead of the afternoon, but it lasted just 59 seconds.

The Big Red rallied with a pair of goals a minute apart from J.P. Schalk and Dave Pittard to move in front, 5-4, with 9:33 remaining in the game.

It was a lead Cornell would not relinquish. Justin Redd added the eventual game-winner at 3:51 of the fourth to create a two-goal cushion.

Harvard pressed in the waning moments, and Johnson scored his second of the afternoon and tenth of the season to bring the Crimson to within one with eight seconds remaining.

But Harvard couldn’t score the equalizer and the Big Red held on to remain perfect in Ivy competition.

Despite Cornell’s three late goals, the Crimson defense was Harvard’s biggest strength through most of the game—holding the Big Red to just three tallies through the first three quarters.

“We played a strong defensive game,” Johnson said. “The defense really stepped up and limited a really good offense to very few opportunities. They were on the ground balls and quickly transferred up to the transition game.”

The Crimson was also able to limit Cornell’s own transition chances.

“Cornell’s game plan was to come in and try to score a lot of goals against us on the transition, a lot like Duke did [in a 15-7 win over Harvard] last week,” Johnson said. “The defense just shut them down on the transition.”

Despite the loss, the Crimson executed its strategy well in the areas that the team concentrated on during practice last week.

“We focused on winning the ground balls, the transition game, not being careless and just trying to play smart during practice all week,” Johnson said. “We did well in all these things.”

Although it scored just five goals, the Crimson was pleased with its offensive production. Cornell outshot Harvard, 33-25, but the Crimson was still able to create enough excellent scoring opportunities.

“Cornell plays a very tight defensive system that they’ve been playing for at least four years,” Johnson said. “And we were able to do well against it.”

Just a few plays were the difference in the contest.

“Towards the end of the game we got a little sloppy on turnovers and clears,” Johnson said. “The offense also wasn’t clicking very well through most of the third quarter. They capitalized on a few small mistakes.”

Primm and sophomore attack Mike McBride added goals for the Crimson, while junior midfielder Jeff Gottschall and senior midfielders Doug Logigian and Jay Wich had an assist each.

The Crimson hosts Brown at 7 p.m. Wednesday before heading to Princeton on Saturday.

—Staff writer Timothy Jackson can be reached at jackson2@fas.harvard.edu.