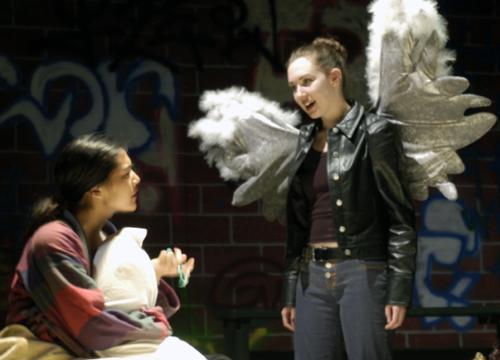 When Marisol awakes these days from her bed in the Bronx, she is faced with the aftermath of apocalypse—streets where the homeless are burned, a moon that’s abandoned its orbit and the eerie absence of the world’s guardian angels. She must accept that God is indifferent and dying and that her world is quickly following in his demise.

Marisol’s reality and her plight serve as a reflection of our own, troubled society in Jose Rivera’s socially-charged, surreal play, Marisol. But the play’s overly broad, sweeping ambition and vision of post-apocalyptic society are never fully realized—and ultimately undermine the strengths of last weekend’s staging at the Loeb Experimental Theater and the accomplishments of an otherwise remarkable cast and crew, ably directed by Rebecca R. Kastleman ’05.

Marisol (Edel Talaid), a young woman living alone in the city, is left behind by her guardian angel (Sara L. Bartel ’06) who decides to lead the celestial battle against a sick, senile God. Though her departure leaves Marisol more vulnerable and alone in her dangerous surroundings, the angel offers hope through the possibility of God’s defeat and a new beginning on Earth.

In the angel’s absence, Marisol mingles with a string of strange characters that both shield and threaten her in this destitute landscape, and generally serve to introduce the gamut of this staged world’s social ills, which Rivera suggests, mirror our own. But in his attempt to tackle both epic, existential themes and a countless number of particular social evils, Rivera sacrifices coherent plot structure and consistently well-developed characters.

This weak characterization, especially of secondary roles, is temporarily forgotten in this production by virtue of the high quality of acting. Kastleman is able to pull emotionally textured performances from all of her actors that highlight the poetry of Rivera’s text without sacrificing immediacy or impact.

Daniel A. Cozzens ’03, who plays a total of four different roles in the production, gets into the skin of his various personae and fleshes out fully believable individuals. He uses humor, pathos and an uncannily realistic speech impediment to create complete characters with whom the audience develops a genuine emotional investment.

Scottie S. Thompson ’05 also offers a gem of a performance as Marisol’s co-worker and friend June. Thompson shows off her comedic flair in June’s first scene with Marisol with ease, bringing to life June’s understated vulnerability, her fear of isolation, and the multi-layered sentiments she holds towards her inexplicable, external world.

Talaid offers a solid and moving performance as the title character, though, ultimately, she is unable to wield a unifying force over the many characters she encounters. Talaid’s inability to bring cohesion to the play doesn’t derive so much from a lack of talent or emotional investment—both of which she in fact clearly demonstrates—but rather to the Herculean task set forth by Rivera for his protagonist. Marisol must unify, in addition to her own fractured sense of the world, all of the play’s disparate characters in the face of a dying God, absentee angels, isolation and all the world’s other woes. She is additionally charged with the equally daunting task of bringing this collective angst and disrepair to the audience and providing an emotional, human context for the play’s saturation of images, messages and themes.

Given the nature of the role, Talaid excels at creating a very human persona with which the audience can readily identify. But ultimately, again as the result of a Rivera’s flawed text, the audience is unable to identify with Marisol’s plight. Despite Thompson’s able portrayal of June, for example, we never appreciate, beyond a symbolic level, the deep emotional connection between the two, or the desperation with which Marisol seeks her out when she is missing—a search that defines the second act and leads to an ambiguous and unsatisfying resolution in the finale.

Maintaining a connection with the audience during all of Marisol’s stage time provides another challenge for Talaid. The actress is occasionally overshadowed by the sheer gusto of her fellow performers and consequently conceded some of her physical presence which was otherwise felt in her powerful soliloquies and more active moments.

But this generally stellar cast never disappointed and was matched only by the technical polish of the production. Kastleman imaginatively orchestrates challenging scenes with overlapping dialogue and simultaneous action, fully utilizing an innovative and versatile set that allows seamless movement from one scene to the next. The set also provides a suitable backdrop for the play’s capable staging.

The lighting was carefully designed, with strobe lights that nicely blended the actions of the play’s angels with a surrealistic visual experience. The sound also effectively communicated and intensified the bleak ambiance of the play’s setting.

With little exception, the performances and production elements of Kastleman’s Marisol are outstanding achievements that bring humor, depth and passion to an otherwise confusing show and offer brilliant snapshots of Rivera’s oftentimes obscured, post-apocalyptic vision.