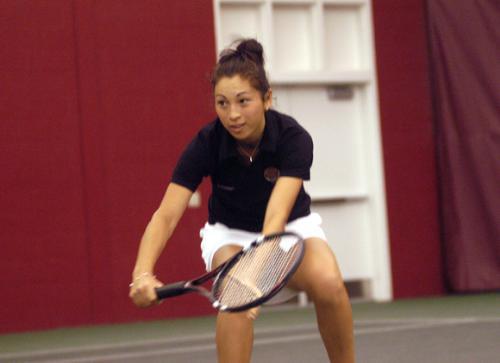 Sophomore SUSANNA LINGMAN won all four of her matches this weekend to lead Harvard over Brown and Dartmouth.
By Sean W. Coughlin, Crimson Staff Writer

The Harvard women’s tennis team opened its Ivy League season in dominant fashion this weekend as it notched decisive wins over No. 68 Brown and Dartmouth. The No. 18 Crimson traveled to Providence Friday night where it blanked the Bears, 7-0. Harvard was just as sharp back on its home courts on Saturday when it trounced Dartmouth 6-1 at the Murr Center.

“The weekend was a great way to start off the Ivy season and keep our confidence levels high,” captain Sanja Bajin said.

The win over Brown moved the Crimson to 13-4 on the year and 11-3 this spring. Harvard took the doubles point by sweeping all three matches, outscoring the Bears 24-14. The pair-on-pair matches were not without drama, however.

The No. 1 duo of sophomore standouts Susanna Lingman and Courtney Bergman jumped out to a 7-0 lead before quelling its opponents’ comeback to win 8-5. In the No. 3 match, the freshman pair of Eva Wang and Melissa Anderson fell behind 5-2 before surging to an 8-6 victory.

The No. 2 team of Bajin and junior Alexis Martire decisively won its match 8-3.

“It’s a great feeling to go into a match having that much confidence in ourselves and each other no matter what happens,” Bajin said.

In perhaps its most dominating singles performance of the year, the Crimson won each of its matches in straight sets. Bajin continued her winning ways in the fifth singles slot with a 6-2, 6-2 victory, remaining undefeated this spring.

Harvard’s top three were equally impressive. Of Bergman, Lingman and Martire, only Bergman allowed her opponent more than two games in any one set. Bergman recorded a 6-3, 6-0 victory over Brown No. 1 Yelena Klurfield. In the closest competition of the day, No. 6 Anderson edged her opponent in a gritty two-setter, 6-4, 7-5.

The Crimson faced Brown back home just 25 hours after its victory in Providence. And, as Harvard had the day before, it cruised to victory again.

The Crimson owned the doubles point, outscoring the Big Green 24-6 overall. At first doubles, Bergman and Lingman played a seamless match and handed Dartmouth’s No. 1 pair an 8-2 loss. At No. 2 doubles, Martire and Bajin wore down their opponents to take an 8-4 victory. Wang and Anderson, meanwhile, made quick work of their adversaries across the net, winning 8-0.

The Crimson bumped up its singles squad one spot in order to give usual No. 1 Bergman a chance to rest as she nurses a pesky shin injury. Lingman stepped into the first spot, recording a 4-6, 6-1, 1-0 (8) victory over Dartmouth’s Jamie Ahmed. Martire’s opponent retired due to an injury after falling behind 5-0 in the first set, and Wang trounced her opponent 6-0, 6-2 in the third singles match.

Bajin proved similarly dominant as she cruised to a 6-0, 6-1 victory over Dartmouth No. 54 Ana Fredeking. Anderson notched the last victory of the day for the Crimson 6-4, 6-3. The Big Green’s only point of the day came when No. 6 Liz Glass fell to Evelyn Stevens 6-3, 7-5 in her first singles action of the spring.

The Crimson will attempt to remain unbeaten in the Ivies as it hosts rival Yale on Tuesday afternoon.

“We’re looking forward to the five matches we have left and the opportunity to win the Ivy championship,” Bajin said.

—Staff writer Sean W. Coughlin can be reached at coughl@fas.harvard.edu.