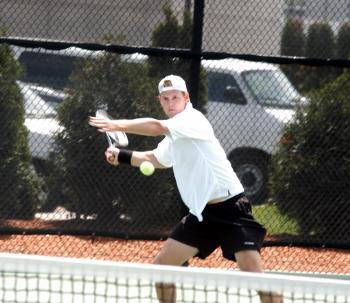 A single point magnificently captured the thrill of victory and the agony of defeat on Saturday.

In the deciding point of the NCAA men’s tennis opener between No. 40 Harvard and heavily favored No. 17 Virginia Commonwealth, Crimson junior Cliff Nguyen hit a cross-court winner to clinch an improbable 4-3 victory. As Nguyen’s teammates stormed their half of the court to carry him on their shoulders, medical staff stormed the opposite end where Nguyen’s opponent Florian Marquardt was rolling on the ground in tremendous pain. Marquardt had called an injury timeout two points before to prevent cramping.

Nguyen’s match capped a wild team victory for the Crimson (18-8, 7-0 Ivy) over Virginia Commonwealth (24-4), the highest-ranked opponent Harvard had beaten this season. The victory allowed the Crimson to advance to the NCAA second round where it fell 4-0 to No. 16 Alabama yesterday.

Marquardt’s timeout made for a climactic finish. The delay gave the sellout crowd of 400-plus time to gather at court No. 3 to cheer him on. Nguyen was not flustered by the momentary distraction and continued to use the energy of the crowd to pressure his opponent.

“I was singing a song in my head so I wouldn’t get nervous or anything,” Nguyen said.

“If you have a chance to beat Agassi, don’t treat it lightly,” Fish said. “I told this team, if you’re in a position to win, go for it then. Don’t sit around thinking you have room to play with. Then you don’t get it, and the match turns around.”

Harvard took the doubles point by a razor-thin margin and was then victorious at No. 2, No. 3 and No. 6 singles. The Crimson had lost four of six first sets but stormed to win the second set in three of those matches and never trailed on the team scoreboard. Harvard junior co-captain David Lingman almost pulled out a come-from-behind victory at No. 1 but fell despite having a triple match point.

By keeping each match close, VCU was never able to gain momentum.

“You never know, either they come in and they dust us or you get your fingernails down a little bit before they knock you off the cliff, and then you hope they climb up so you can look eye-to-eye,” Fish said.

“Every single match, I tell them it’s like a spider web, if you press one strand, it pulls everybody in that direction,” he added.

At No. 1, Lingman and sophomore Jonathan Chu used terrific volleys and passing shots to earn a 9-7 victory. Lingman closed out the match with a powerful, cross-court volley winner, evening the doubles score at 1-1.

That victory spurred on juniors Mark Riddell and Chris Chiou at No. 2. With an 8-7 lead while trailing 30-0, they scored the last four points to close out their match and win the doubles point for Harvard. The turning point came at 7-7, when their opponents gave up an easy game by double faulting twice.

In the 8-3 defeat at No. 3 doubles, Nguyen and co-captain Oli Choo were not having their usual success off their serves and were flustered by their opponents’ strategy. Nguyen said they had never played a team that had stayed back on their serve.

The doubles point set up Harvard to carry the match.

“Everything had to go in our favor,” Fish said. “Basically we had to get the doubles point against this team because their singles is good enough to take four or five off lots of teams in this country.”

The attention then shifted to Lingman’s match at No. 1, as he began to slow down his opponent with powerful forehand winners and well-placed volleys. His opponent, No. 60 Pedro Nieto, had won 18 straight matches, including a straight-set victory over the No. 22 player in the nation.

Nieto easily captured the first set 6-1, but Lingman battled back, knowing that his opponent could not keep up the high level of play displayed in the first set for the whole match.

Lingman dominated Nieto for the second set, 6-2, and used that momentum to stake himself a 5-2 lead. Lingman had triple-match point at 5-4, but on his third chance, he began to cramp. He lost most of the movement in his wrist, and after he hit a high volley long, Nieto made a stunning comeback to win the match, 6-1, 2-6, 7-5, evening the overall score at 2-2.

“I still should have still hit that high ball,” Lingman said. “Team tennis is a weird thing. I’m disappointed but I’m still happy.”

Choo’s match also involved a great comeback as he lost the first set, 4-6, but used numerous passing shots to take the second and third sets. Choo was up 4-1 in the third set but had to hold of his unyielding opponent for a 4-6, 6-3, 6-4 victory at the No. 6 spot, similar to his dramatic, comeback victory over Brown.

“Fish told us this story before the match, the moral was not giving up and just fighting as hard as you can as long as you’re out here,” Choo said. “I think that helped us a lot.”

Fish had emphasized that losing the first set was not the end of the match. He referred to this as an attitude of excellence and professionalism.

Although up 3-2, the Crimson was unable to celebrate yet because both of the remaining matches could have gone to VCU. Riddell, although victorious in the first set, had lost the second set, 2-6, and trailed in the third set. Nguyen was in an all-out battle at No. 3, as his match was tied at 5-5 in the third set.

At No. 4, Riddell forced his opponent into numerous unforced errors, and won the first set 7-6 (11-9) after his opponent double-faulted and threw his racket in frustration. But Riddell ultimately fell 6-7 (9), 6-2, 6-3, making the overall match score 3-3 and leaving Nguyen in the decisive match.

Nguyen said the he felt in control of his match at all times, despite losing the first set 3-6.

“I felt like if I could keep it up and keep the pressure on this guy he was going to crack sooner or later,” Nguyen said.

The strategy worked as Nguyen was able to capture the second set 6-2. The third set had numerous momentum swings, but Nguyen took the 6-5 lead with his opponent on serve to set up the dramatic finish.