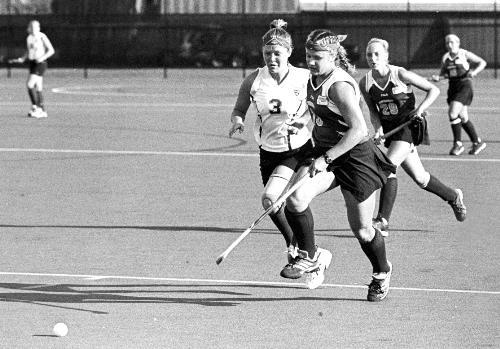 The Murr Center walls had never endured a roar as loud and piercing as the one that erupted when the Harvard field hockey team discovered it had earned an at-large bid for the 2002 NCAA tournament.

The reaction was appropriate considering that just three weeks earlier, the Crimson (12-6, 6-1 Ivy) had sullied its record by losing consecutive games to Boston College and Princeton. The 4-1 loss to the Tigers was particularly devastating because it cost Harvard the Ivy title.

But instead of packing it in, the Crimson closed out the regular season with three straight shutouts. Nevertheless, Harvard still needed all the other bubble teams to falter in their conference tournaments to make the NCAA bracket. One by one, they did.

Harvard coach Sue Caples gave her team tremendous credit for turning its season around down the stretch just in time to capture the program’s second at-large bid in three years.

“Sometimes it’s easier to win a conference than win an at-large bid,” Caples says. “You’re competing with so many more teams than just within your conference. I think the Ivy thing is just really psychological for us, and we just need to eliminate that mental obstacle, whatever it is.”

Harvard hosted No. 3 seed Michigan State in the tournament’s first round. The Crimson stunned the Spartans by dominating the second half and outshooting them 20-2. But Harvard only mustered one goal and couldn’t erase its 4-2 halftime deficit.

“Our team was very comfortable with the situation out there,” Caples said after the game. “It took a few minutes in the beginning, but then we dominated and possessed the ball. We did everything except put the ball in the net.”

Against the Demon Deacons, Harvard went up 1-0 but could not hold on in a 3-2 defeat. No one else came much closer to victory against Wake Forest, which outscored its opposition 53-3 after beating the Crimson.

“It’s nice to know that we only lost by a goal to the national champions, but it’s kind of frustrating because it’s been two years in a row that we’ve done that,” said junior Kate McDavitt. Harvard lost in overtime to 2001 champion Michigan the previous season.

McDavitt, the team’s leading scorer, elevated the Crimson by coming back from a serious knee injury that caused her to miss her entire sophomore season.

“It’s been really inspirational to see her come back,” says freshman Jen McDavitt, Kate’s sister and the Ivy Rookie of the Year. “I know it was so hard for her. To see her [injured] was so tough for me as well, because I loved playing with her. I wanted her back on the field. She’s not 100 percent, but she’s definitely putting her heart into it.”

Despite the injuries, the elder McDavitt doubled her goal total from freshman year, an outcome that she never expected.

“She definitely didn’t have the speed she had freshman year, but she’s more than made up for it by playing a smarter game and using her stickwork, and she shoots the ball so well,” said junior back Jen Ahn.

Kate McDavitt and Ahn become the first Harvard teammates to earn All-American honors in the same season. Both were third team selections.

“[Ahn and McDavitt] both just see the field,” said captain Katie Scott. “They must break it down in some way so they can see really good passes. They have great stickwork so they can dribble through a lot of people and make the great pass.”

With so much returning talent, the team is looking for even greater success in the fall.

“Tournament experience is really great. We love being here and we’re going to be right back in this position next year,” said Zacarian, who led the Ivies in goals-against average and shutouts.