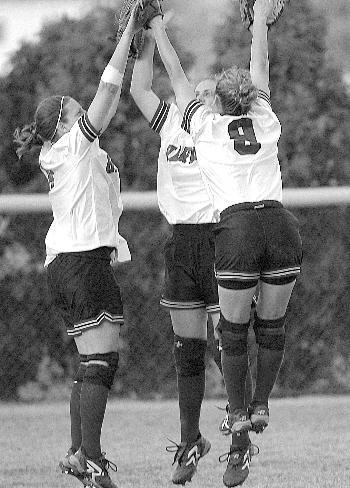 Unlike last year’s, this Harvard softball season did not feature week-by-week record-setting performances and an Ivy title race that came down to the wire. It did, however, include a thrilling doubleheader sweep of Ivy champion Princeton and the conclusion of one of the greatest careers in Harvard history.

The Princeton sweep came at an improbable time considering that a day before, Harvard (15-26, 7-7 Ivy) had guaranteed its worst Ivy finish since 1994 by dropping a doubleheader to Penn, while Princeton clinched its second consecutive Ivy title. None of that mattered when the two teams met on April 27 at noon. Over six hours and 22 innings later, Harvard had its sweep—a 3-2, 12-inning win in the opener and a 6-5, 10-inning triumph in the second game.

“I think the Princeton doubleheader kind of defines my time at Harvard,” said tri-captain Tiffany Whitton. “That was great for the program and it showed a lot of heart to win two games in extra innings. If I look back on this season, the one thing I’ll remember is those Princeton games.”

Whitton’s 10th-inning game-winning homer against Princeton was the last of many such hits throughout her career. She graduates as the school’s all-time leader in home runs and among the leaders in average and RBI. Her junior season, when she topped the nation in RBI per game and led Harvard to its best win percentage ever, set a new standard for offensive excellence.

Wins were much harder for Harvard to come by this season. The team went 5-17 in pre-Ivy games and 0-3 to start the Ivy season. The year could have been worse had junior tri-captain Kara Brotemarkle not stopped the bleeding with a no-hitter—Harvard’s first since 2000.

“I told Kara before the game that she needed to pitch the game of her life, and she did,” said Harvard coach Jenny Allard.

Outstanding performances from Brotemarkle, a second-team All-Ivy selection, were typical this season. She pitched all 12 innings of the first Princeton win and turned in 10 shutout innings against Dartmouth on the season’s final day.

Brotemarkle would have had to pitch even longer in that Princeton win were it not for a clutch game-winning hit by sophomore leadoff hitter Lauren Stefanchik.

No one had more hits for Harvard than Stefanchik, the team’s only first-team All-Ivy selection other than Whitton. The speedy slap hitter batted a team-best .389 for the year and stole 24 bases, one short of a school record.

With the Ivy League full of young pitching standouts, the Crimson could not match its offensive performance of a year ago, but two Rachels still had stellar seasons. Freshman third baseman Rachel Murray, who finished third on the team with a .297 batting average, earned second-team All-Ivy honors. Junior shortstop Rachel Goldberg, who led the team in home runs, earned the team’s most outstanding defensive player award and was an All-Ivy honorable mention selection.

Freshman Michelle McAteer and sophomore Lauren Bettinelli each had flashes of brilliance on the mound. Most notable was Bettinelli’s relief performance in the second Princeton game in which she pitched four shutout innings before surrendering one run in the 10th and earned the victory.

Allard liked what she saw from the team at the end of the season, and with Whitton the only senior graduating, there will be plenty to build on.

“The team’s hitting their stride now,” Allard said following a season-ending split with Dartmouth. “It’s too bad that the season’s ending. We need to do that earlier in the year next year. We learned that.”

HIGHLIGHTS Brotemarkle pitches no-hitter against Columbia. Crimson sweeps 2002 and 2003 Ivy champion Princeton. Whitton graduates as team’s all-time leader in home runs and among the leaders in average and RBI.