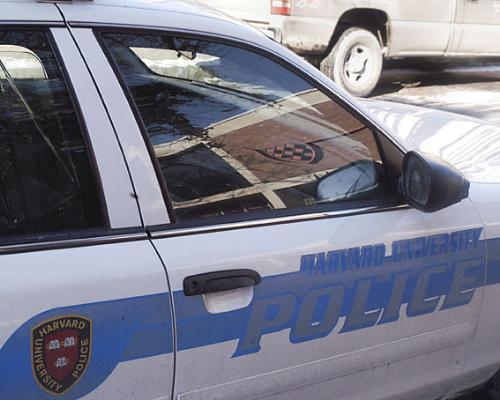 A Harvard University Police Department cruiser sits outside of Quincy House. An increased police presence is one of the steps HUPD has taken after another student was groped near campus this week.
By Hera A. Abbasi, Crimson Staff Writer

Following the fifth sexual assault near the Square this semester, administrators and Harvard University Police Department (HUPD) officials have begun to step up their response to students’ safety concerns.

Dean of the College Benedict H. Gross ’71 sent an e-mail to all students on Wednesday outlining safety precautions and stressing the University’s commitment to safety.

“The University takes its responsibility over the security of the campus very seriously, and the unusual number of reported assaults has prompted the University to take a number of steps,” Gross wrote in the advisory.

These steps include increasing the presence of police officers on campus and plans to start a new safety escort service to replace the now-defunct SafetyWalk.

Gross’ e-mail came a day after an early evening groping near Claverly Hall.

According to HUPD spokesperson Steven G. Catalano, a student was walking on Mt. Auburn Street towards Claverly while the suspect was walking in the opposite direction, at around 5:40 p.m. Tuesday.

The suspect then touched the female student “in an inappropriate manner,” Catalano said.

The suspect in Tuesday’s indecent assault was described as a 6’6” tall white male in his early 20s with a large build, dark eyes and light hair, and wearing a dark gray jacket.

HUPD has taken measures in response to the recent assaults, Catalano said.

“As a matter of policy we don’t comment on exact staffing levels or patrol techniques,” he said. “I can tell you we have dramatically increased our uniformed and plain clothed presence but I can’t give you exact numbers.”

And a new escort service organized through HUPD is in the works, Catalano said.

“We don’t know what the final product will look like. We like the idea of using students to conduct the escorts,” Catalano said. “But we will take a more active role in supervising the program and publicizing the program to the community.”

In the meantime, Catalano said students should walk in groups “when possible” and use shuttle and van services.

Gross said in an interview yesterday that the new service will pay students and include pairs of students who will act as escorts, but it won’t necessarily be an on-call service. Instead, students may walk to and from specific locations at designated time intervals.

“The problem with SafetyWalk was it was not heavily used and it was purely a student volunteer organization,” Gross said. “I guess if you sit in front of the phone long enough and it doesn’t ring, you’re not going to sit by the phone.”

But he said he expects that students will be eager to take advantage of SafetyWalk’s successor.

“I think this new escort service will fill a big gap,” he said.

In his e-mail, Gross also reminded students to use the Shuttle Bus Service, which runs 24-hours during reading and exam period.

He noted that the administration is “reviewing concerns about Shuttle Bus Schedules and the Evening Van Service” in the wake of reports of the shuttle service being late or stranding students in the middle of the night.

But Gross acknowledged that there have been reported assaults in the past on or near these designated pathways.

“There’s no place one can point to in Cambridge and say, ‘This is an absolutely safe place to stand,’” Gross said, adding that it’s impossible for there to be a patrol “at every place and every time.”

Undergraduate Council President Rohit Chopra ’04 said that though the College is acting to address safety concerns, more can be done.

“I don’t think this is any fault of the police but I think it reminds us that we need to devote more resources to just keeping the campus safer,” he said. “Also, better communication about what’s going on is pretty easily achieved—just regularizing how the advisories are sent out and making sure they are sent out in a timely way.”

In light of the recent assaults, some students have criticized the dissemination of these “Community Advisories,” noting that each House uses a different system.

Students in Mather House first saw the advisory when it was sent to the House’s open-list on Wednesday night by undergraduate council representative Oulu Wang ’06.

In her e-mail to the House, Wang expressed concern for Mather’s delay in sending out recent advisories.

“I find the delay unacceptable and irresponsible on the part of the Mather House administration, especially since other houses have disseminated timely information on the attacks,” Wang said.

According to the e-mail, Mather House received an advisory on Wednesday about last Saturday’s assault in the Yard, four days after it had occurred.

Sari M. Poage ’05, who also lives in Mather, sent an e-mail to the list saying she agreed with Wang.

“If there is a person out there who is assaulting students, a warning delay of a few days can make a very dangerous difference,” she wrote.

Other students said that Gross’ safety message did little to ease their anxiety.

“I think he covered most areas but I don’t think we’ve seen a lot of these things happening,” said Elizabeth W. Burke ’04. “There was not a timeline of when these things were occurring.”

Another indecent assault occurred last Saturday, when a student was groped in Harvard Yard by a man on a bicycle.

According to Catalano, the incidents seem unrelated because of the different descriptions of the suspects.

On Dec. 2, an undergraduate was cutting through the parking lot of St. Paul’s Church on her way to Dunster House when an unidentified man attempted to rape her, according to HUPD.

Around 7 p.m. on Dec. 11, a graduate student was walking toward Dunster Street when a man coming from the opposite direction allegedly attempted to grab her crotch.

Police said that on Oct. 22, a Harvard student was attacked at approximately 8:30 p.m. when a male grabbed her wrist and waist, spun her around, grabbed her breast and then attempted to remove her coat. The victim struck the face of the suspect, who returned the blow and fled the area.

Three women unaffiliated with the University were groped within blocks of the Quad in separate incidents in October.

—Staff writer Hera A. Abbasi can be reached at abbasi@fas.harvard.edu.

—Jenifer L. Steinhardt contributed to the reporting of this story.