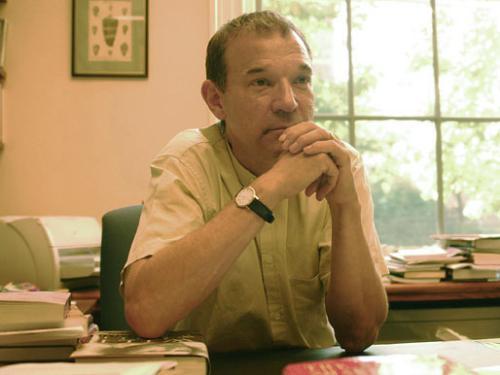 For John Cogan Professor of Humanities Stephen J. Greenblatt, Shakespeare is more than a master playwright—he’s a literary genius whose remarkable achievements can only be explained by the vivid narrative of his life and times.

In his latest book, Will in the World: How Shakespeare Became Shakespeare, the award-winning Norton Anthology editor recreates a possible life of the elusive bard in order to postulate how Elizabethan England gave rise to who is widely regarded as the world’s greatest writer.

“There is a remarkably broad interest in Shakespeare, a hunger that appears insatiable,” Greenblatt says. “This book is an attempt to address that hunger by connecting the life and works of the great poet.”

Everything, from Shakespeare’s childhood visits to the British countryside to his secret practice of Catholicism to his son Hamnet’s death, is connected to specific passages of his various works, according to Greenblatt.

“There must be something in Shakespeare’s life that we can probe to account for his mastery,” Greenblatt says. “The life that matters to us is the life that explains to us how he did what he did.”

Greenblatt’s decision to write a literary biography came just ten years ago after he worked with screenwriter Marc Norman on an early script of the celebrated film Shakespeare in Love.

“Back then, I didn’t think that the events of Shakespeare’s life were very filmic,” Greenblatt says. “I told Marc Norman to write a screenplay on Marlowe. Shows what I know!”

Despite the many award-winning academic books to his name, the Hamlet in Purgatory author admits that writing can still be an arduous experience.

“For me, the writing process is a sort of inch-by-inch trench warfare done to look easy. I write painstakingly to make it look effortless,” he says.

Will in the World, which draws on Greenblatt’s entire career of scholarship and literary analysis, took four years to plan and complete. Like his past works, the project was not without its share of obstacles. Reviews are already mixed; some laud Greenblatt for his subtle treatment of the material, others accuse him of going too far in his correlations.

The biography’s twelve chapters, arranged in roughly chronological order, portray Shakespeare learning his craft, starting a family and building a career in the competitive world of Elizabethan theater—all to shed light on the historical context linked to the playwright’s masterpieces.

Greenblatt posits that these publicly documented events reveal the actual man who penned “the most important body of imaginative literature of the last thousand years,” yielding a new understanding of his genius.

Because he targeted both an academic audience and the general public, Greenblatt says it took careful maneuvering to balance scholarly knowledge of the bard’s life with conjectures about his experiences.

“If you stick only to the established known facts of Shakespeare’s life, you’re doing something that’s already been done and you don’t get very far,” Greenblatt says.

“The key is to make good of speculation. It takes a kind of tact to dare to go far enough but not so far that you grossly distort what you already have.”

To strike this equilibrium, Greenblatt says that he relied heavily on literary studies, his knowledge of cultural history and his own intuition to reconstruct the likely day-to-day events of Shakespeare’s life.

On Oct. 4, Greenblatt will hold a reading and book-signing at The Harvard Book Store, an event which marks the beginning of a nation-wide tour to promote his latest work. Once his schedule clears, he plans to complete a play that he is co-writing with Charles Mee and continue with his next book on cultural mobility, or more specifically how ideas “move from one place and time to another.”