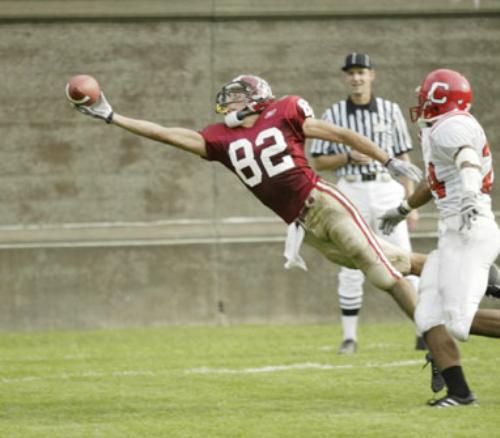 Senior wide receiver Brian Edwards goes all out for the one-handed grab in the Cornell endzone while Big Red cornerback Jason Cloyd can only watch.
By Robert C. Boutwell, Crimson Staff Writer

For the first time in a long time, sophomore tailback Clifton Dawson did not pass the century mark. A stalwart Cornell defense held Dawson to only 64 yards on 21 carries, breaking his streak of nine straight games with 100 yards or more on the ground.

“We focused on shutting him down,” said Cornell coach Jim Knowles. “But with [quarterback Ryan Fitzpatrick] we were just one or two athletes short.”

Cornell’s ability to put senior whip Joel Sussman or senior safety Brad Kitlowski into the box on many plays hindered Dawson’s ability to burst free for one of his patented breakaway runs. He has already had four runs of 70-plus yards in his Harvard career. Saturday, Dawson averaged only 2.9 yards per carry and his longest rush on the day was just 17 yards, a far cry from the 80-yard run Dawson put up in his last Ivy League contest against Brown.

“[The key to stopping Dawson] was to put a lot of guys up there and play real physical,” Knowles said. “You have to try to keep him off balance with a lot of stunts and different rhythms.”

Despite being held without a rushing touchdown on the day and staying pat at nine rushing TDs for the season, the sophomore remains on pace to shatter the Harvard single-season record of 13 rushing touchdowns, set by Chris Menick ’00 in 1997. Dawson’s first quarter touchdown catch from Fitzpatrick was his first scoring reception in a Harvard uniform.

A CASE OF THE YIPS

With the way the kicking game at Harvard has been in recent memory, Matt Schindel’s early season excellence almost seemed too good to be true. The freshman had made all five attempted field goals and was nine-of-10 on extra points coming into Saturday’s game. Against the Big Red, however, he missed one field goal and had another blocked.

While Schindel did convert on two extra points, the Crimson also missed two extra-point attempts, harkening fans back to the days when woeful Harvard kicking was a nagging concern.

The notorious winds of Harvard Stadium proved equally tricky for the Big Red, however.

Cornell kicker Trevor MacMeekin, who had made five of seven field goal attempts coming into the game, had his kick blocked on Cornell’s first drive of the game by senior Matt McBurney.

MacMeekin also missed a 33-yard field goal with time running out in the first half.

Junior punter Mike King was able to convert on a couple of big punts in the first half, with a long of 45 yards, but he struggled in the fourth quarter. On consecutive Harvard possessions in Cornell territory he tried to pin the Big Red deep, but ended up kicking the ball into the endzone.

HE DOES IT ALL

Senior wide receiver Brian Edwards was named Ivy League Special Teams Player of the Week following his versatile performance against Cornell. Though Edwards is usually known for his highlight-reel catches in the receiving corps, he demonstrated Saturday that he is a threat no matter where he is positioned on the field.

Edwards returned a kickoff 92 yards for a touchdown in the second quarter, the fifth-longest kickoff return in Harvard history. He garnered 127 total yards on his three kickoff returns.

He also moonlighted in a passing role, taking a reverse pitch from Dawson and slinging it 21 yards downfield to fellow wide receiver Corey Mazza for a 27-24 Harvard lead in the third quarter.

Edwards tacked on three catches for 48 yards to finish the day with 175 all-purpose yards.

—Staff writer Robert C. Boutwell can be reached at boutwel@fas.harvard.edu.