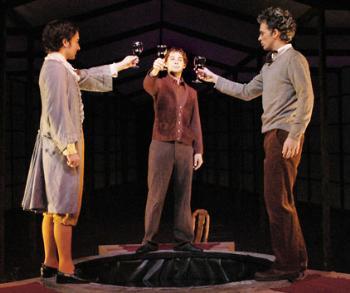 Director Mike Donahue’s The Physicists is, in a word, flawless. Boasting excellent acting and incredible production values, and held together by a directorial efficacy that demonstrates talent beyond simple professionalism, The Physicists is far and away the best production I have seen mounted in the Loeb Mainstage in the past four years.

Playwright Friederich Dürrenmatt’s darkly comic tale of love, murder, identity and physics sparkles with absurdist charm thanks in large part to the production’s cast, which is stellar: each and every one. Alan D. Zackheim ’06 is somber and compelling as the solitary physicist-on-a-mission Johann Mobius, and his single-mindedly devoted yet star-crossed love interest Nurse Monika (Erica R. Lipez ’05) transcends the surreal and silly qualities of her character to turn in an occasionally poignant performance.

Josh M. Brener ’07 is hilarious as the completely over-the-top Sir Isaac Newton: Brener conjures a preposterous manner and has a knack for physical hijinks that make him a sure-fire crowd pleaser and great fun to watch. Mike B. Hoagland ’07 is a subtle presence as Einstein, giving the character a nuanced believability not at odds with the regular and well-turned delivery of funny lines. Mary E. Birnbaum ’07 displays an excellent comedic timing and projects an overall enthralling presence as the deranged, megalomaniacal Fraulein Doktor Von Zahnd, whose triumphant ranting (delivered while wearing a soaking wet wedding gown) towards the play’s end left many in the audience rapt. Peter A. Dodd ’06, as the intense yet completely preposterous Inspektor Richard, is likewise funny and energetic, and carries his scenes with verve. In lesser, multiple roles, Carla M. Borras ’05, Jeremy R. Steinemann ’08 and Stephen T. Volpe ’07 all draw upon seemingly bottomless reserves of energy to create various absurdist caricatures and to tear about the stage in wonderfully orchestrated sequences of madcap physical humor.

The Physicists’ set (the work of Melissa E. Goldman ’06) is absolutely stunning. Solely the product of the show’s ingenuity (Dürrenmatt’s script, I am told, details nothing about staging), the sanitorium structure that enfolds the stage is a marvel that not only testifies to an unimaginable amount of work hours, but to a well-thought aesthetic. The centerpiece of the stage—a raised bath—is a brilliant addition and put to regular and effective dramatic use. By the same token, the lighting and sound design are seamlessly and professionally integrated into the rest of the production. Finally, the show’s costumers deserve considerable credit for their very good efforts.

The directing that ties The Physicists is, in my humble though fairly informed opinion, peerless. The fluidity with which scenes develop, the liveliness and manifest enthusiasm which the actors display and the poise and confidence with which they engage each other, to say nothing of the production’s highly toned style, all testify to a directorial vision and ability like few others on campus. That, on an opening night, comic timing could be as precise as it was had been unthinkable for me prior to attendance. The extent to which I found myself drawn into the performance rivaled what only rarely happens to me in observing professional, ‘real-world’ theater. Indeed, Donahue’s prowess extended far beyond mere mise-en-scene. I had been cautioned, prior to attending The Physicists, that Dürrenmatt’s script had its imperfections. However, much to his credit Donahue has eliminated many of its weaker stretches, and the resulting dialogue and plot pacing is excellent for that intervention.

That The Physicists raises the bar for Harvard theater is clear, though to what extent its example can be emulated is an open question—works of this caliber can happen, even in the best of circumstances, only rarely. Whatever the case, the Harvard-Radcliffe Drama Club (HRDC) should be fiercely proud of The Physicists, a fruit of home-grown Harvard talent that surpasses even the laudable products of the Visiting Director’s Program, and its staff, cast, and crew have my unrestrained kudos

-—Staff writer Patrick D. Blanchfield can be reached at blanchf@fas.harvard.edu.