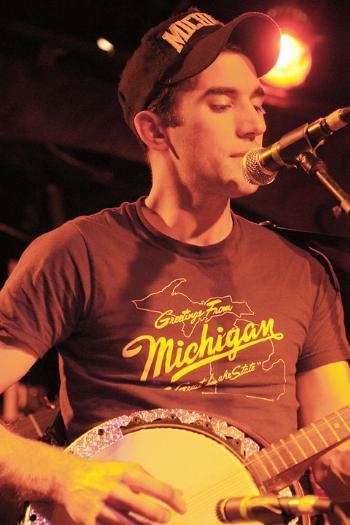 Even if your only religion involves band t-shirts and b-side vinyl, consider for a moment an afternoon organ recital at your local cathedral as a perfect, albeit unlikely, refuge from today’s folk-pop play list: a salvation, if not from evil, then from present day independent music’s fuzzy instruments, vague lyrics and disaffected warbles, so often praised by the disaffected critics at that God of indie webzines, known, perhaps fittingly, as Pitchforkmedia.com.

Listening to Sufjan Stevens, 29-year-old songwriter and rising folk darling (even Pitchfork loves him), is one such sanctuary, a slightly dark, unabashedly earnest and hopeful experience. With the delicate voice of a young man who’s just losing his world-weary reticence, Sufjan (pronounced SOOF-yan), whether in conversation or in song, perpetually sounds as if he’s making his transcendent re-entrance to a simpler place with a sweet, happy calmness.

If the sight of the cherub-faced troubadour serenely strumming alongside his troupe of happy horn players, bell-ringers and la-la-laaing singers (all of them friends, and all of them shockingly gorgeous) isn’t one of the most convincing displays of transcendence-by-banjo, just check out the congregation. At the Middle East club last Sunday, there was none of that self-conscious swaying-and-chanting stuff, but there was ample staring and a lot of smiling. The cynical, pierced ears of all the emo kids were melting.

That feat is even more impressive considering his favorite topics of late. First, there is his home state of Michigan, to which his 2003 album Greetings from Michigan: The Great Lakes State is a tribute (he has a plan to do the other 49 too, and will continue with Illinois—“I’ve been reading a lot about Lincoln, poetry by Carl Sandberg, doing research,” he says). And then there’s his other favorite topic: his Father.

You can call Sufjan good—he is very, very good, in a few senses of the word—but don’t call him a Christian musician. “My music is just about story telling,” he offers. “I don’t have much to say, and I’m not trying to change anyone’s mind.” On the phone from California, where he’s rehearsing for indie-rock’s prestigious All Tomorrow’s Parties festival, Sufjan sounds just as polite and delicate as he does on record. “I’m just singing through conviction about what I love and what I care about, starting with the very small.”

Sufjan’s interest in the small carries over into a perfectionist precision in his music and voice. His poetry grows universal through its vivid specificity and his concerns, whether bathed in joy or pathos, are important to us because every syllable and every note is important to him, a result of years pouring over the ornaments of Bach, the flourishes of Debussey, and the complexities of Philip Glass—“Although I’m not going to pretend I’m on that level of sophistication.”

But both technically and emotionally, it’s hard not to be love-struck by the dancing patterns, shimmering percussive explosions and pin-pricked arpeggios that animate his vivid meditations, which may be on fraying familial relationships, the unemployed of Flint, Michigan, or, to take an example from his latest album, the story of Abraham.

Of course, singing about things like that in the world of popular music verges on the sacrilegious. Despite being the bedrock for much of our civilization’s greatest artists, from Michelangelo to Joyce, God hasn’t fared too well on stereos in recent decades. Like protest or political anthems, “praise” songs are relegated to the farthest possible margins of coolness, not just because of their pedantic (and un-cosmopolitan) message, but because their preaching and passion doesn’t make for very good music. In the case of the ever-demonized field of Christian rock, top-40-hood isn’t totally out of the question—that is, until listeners realize what over-the-top trash they’re singing along to.

There are of course notable exceptions: Kanye West has brought God back to mainstream rap (“Well if this take away from my spins / which will probably take away from my ends / then I hope it take away from my sins” is his approach to the popular/religious music divide) while good singer-songwriters like Joseph Arthur and Pedro the Lion have been doing the same in indie music. If the folk and emo sensibilities of rap and indie-pop make these genres friendlier to religion than usual, these genres also tend to be more self-conscious, making the music itself better but making the audience harder to please at the same time.

If Sufjan is pleasing them it is not just despite of, but also because of his particular spin on praising the Lord. While his Christian leanings remained largely invisible for last year’s folk-rock revelation, Greetings from Michigan, they aren’t hiding at all on his newest and just-as-lovely record, Seven Swans. But forget the apparent flag-waving of titles like “Abraham,” or “The Transfiguration” or “In the Devil’s Territory;” Sufjan never eats the apple of triteness, excess, or pedantry. He always dignifies his audience and his subject matter by directing his adoration into an occasionally unearthly music that nonetheless never leaves human ground, never falling into the preachy.

This is how Sufjan can get even the most secular of listeners not only to appreciate his tributes to his One Love but also to partake in their beauty too. In the album’s title song, when he sings, atop a melodious mountain of voices and bells and old piano, “He will take you / If you run / He will chase you / ’Cause he is the Lord!” his most potentially melodramatic moment becomes his most transporting.

Among his audience, it is debatable whether beautiful love songs like “To Be Alone With You,” which could as easily be addressed to a “she” as to a “He,” deserve to be pigeonholed as “Christian music” at all. Sufjan certainly doesn’t think so. His only interest is making songs about his own private love, and hopes that people can remember to love, something, anyone, in the midst of a troubled world.

Speaking of which—and considering his obsessions with the fifty states and God Himself—not asking Sufjan about America’s peculiar mixture of religion and politics is like not asking John Kerry if he supported the war in Iraq.

“Christianity is a faith that has no interest in power or no meaning in an environment of power or wealth,” he explains, his lilt turning slightly urgent but remaining delicate. “The moral imperative is a delusion, and [in terms of the election] I think it’s a distraction; [Christianity] is not a faith of morals or principles; it’s about a relationship, service in love to God and other people. If it were about morals and virtues, I don’t think Jesus would have pissed off so many Jews; he was doing things that were considered obscene. He was doing work on the Sabbath, he was a messy angry person. He definitely wasn’t guided by principles.”

Sufjan’s religious upbringing, he says, was a mix of untraditional Midwestern beliefs encouraged by his hippie parents: “Amway, self-realization training, methods camp, Catholic school, macrobiotic diets, yoga—we jumped from thing to thing.” He landed on protestant Christianity because he found it grounding, “so simple and stable.”

What he sees in the Christianity of “red state” American politics however, of the moral standards of “the religious right” and the Christian Coalition, is something else entirely, amounting to nothing more than “a political lobbying group.”

“Morals, principles and laws are when faith is reduced to standards and those standards basically just bind us, and we become prejudicial, racist, self-serving when we’re guided by these laws... When a developed country uses Christianity in its policies, in government, in maintaining corporate wealth, that’s a bastardized rendering of a faith.”

For his part, Sufjan is keeping the faith by remaining faithful to the music he’s been making since the oboe in middle school, since the dog days of “Readers Digest renderings of famous classical works.” If he’s not writing arrangements for his new album on the piano, he’s tuning his banjo or tapping a beat on the computer, an instrument he learned could be “really musical.” Evidence can be found on his electro-acoustic opus, “Enjoy Your Rabbit,” which he recorded while getting his masters in writing at the New School of Social Research in New York. And like most artists who live in Brooklyn, he practices freelance graphic design on the side.

And then there’s Sufjan’s new record label, called Asthmatic Kitty. While he’s doing “a lot right now” for the label, he’s definitely looking forward to doing less organizational work and more finding new bands with his friends. “It’s not quite a cooperative situation, but everyone has a certain stock in the label. It’s a very social thing.”

The social aspect is part of his whole vision too, what gives his music humanity—and humaneness. Despite the size of his ideas or his concerns or his devotion, Sufjan always wanders back to the local level.

“This election was about big issues which have no impact on our day-to-day lives,” he says on Nov. 5, “but we’re about the small things. We should care about caring for each other; TV is ruining us; sometimes I get depressed and feel like this is the decline of civilization. Politicians aren’t interested in what the people want: they’re interested in their careers.”

Even though Sufjan’s own career is pretty well established, you’d be hard pressed to say that’s all he was interested in, if he is at all. “If there’s anything to say, if there’s anything to do,” he sings on the Michigan album, “If there’s any other way, I’ll do anything for you.” His real interest is in what his God wants, and what a lot of people in Michigan and all the other states want too: some beautiful home-grown harmonious love.

—Staff writer Alex L. Pasternack can be reached at apastern@fas.harvard.edu.