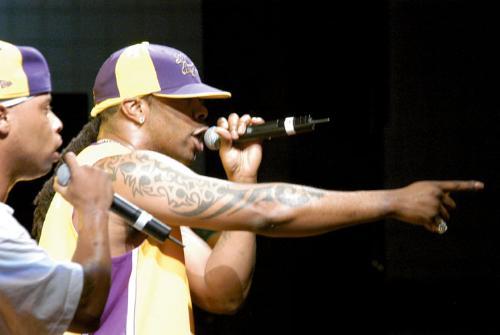 Busta Rhymes performs this spring before 3,000 people at an Undergraduate Council-sponsored concert at the Lavietes Pavilion
By Elena Sorokin, Crimson Staff Writer

A year ago, Matthew W. Mahan ’05 campaigned for the Undergraduate Council presidency on a platform that pledged to resuscitate Harvard’s social life by bringing big-name acts to campus, and making sure the council had enough money to do so.

As council president, Mahan has succeeded in raising the Student Activities Fee by $25, and using the extra $100,000 generated by the hike as leverage to sign comedian Jim Breuer and rock legend Bob Dylan for performances this fall.

Under Mahan’s watch, the council has also come under scrutiny for its fiscal irresponsibility, particularly because $30,000 worth of checks for student groups and House Committees (HoCos) bounced last May.

Moreover, October’s Breuer show and last night’s Dylan concert have incurred hefty, though expected, losses—placing a heavy burden on the council’s budget. (For more on the Dylan concert, see related story at left.)

“The take-away point is that this is a zero-sum game,” says Financial Committee (FiCom) Chair Teo P. Nicolais ’06. “For every dollar we spent on the Jim Breuer event and the Bob Dylan concert, there was one dollar less to spend on student groups.”

A presidential candidate in this year’s council race, Nicolais emphasizes the social value of HoCos, which have argued they have been most hurt by the shift in spending priorities.

In campaigning for his vision of student life, Nicolais will face another presidential contender with strong council credentials, Matthew J. Glazer ’06. (For more on the council’s presidential race, see related story, page A8.) Glazer, who chairs the Student Affairs Committee (SAC), says that large-scale events provide invaluable “unstructured social experiences” for the entire student body. He says the termbill fee increase allows for these events without hurting HoCos and student groups.

On the eve of the next council election, the divergent opinions of insiders reflect the growing pains of a better funded council that has to decide what its priorities should be, and how its funding should reflect those goals.

SHOW ME THE MONEY

Last year when the termbill fee was still at $35, the council was effectively spending $47 per student, says Council Treasurer Clay T. Capp ’06, who is Glazer’s running mate in this year’s race.

Council members insist that the hike, which raised the fee from $35 to $60 and increased the council’s budget by about $100,000, was necessary to continue funding student groups and HoCos, while making good on promises to bring big-name bands to campus.

“The bottom line is if we hadn’t gotten this increase, we would have been crippled,” Glazer says.

While council members agree on the need to increase the fee, they part on how to use that money. As the council spends more on these large concerts, some argue that other allocations, including that for HoCos, will decrease.

“Last year’s HoCo funding was an anomaly. We had more money and we were able to give it to them,” Glazer says.

The responsibility of supporting HoCos has fallen traditionally on the Committee Fund, but this year the Grants Fund also shares that burden.

Last semester, the council allocated $40,000 from the Committee Fund to HoCos, while this fall they capped Committee funding to $18,800 per semester, or $1,500 per House. Under the new system, each HoCo can then apply for up to $2,000 from the Grants Fund.

HoCo members have voiced their frustrations about these funding changes, even attending a recent council meeting to address their representatives.

Lowell HoCo Treasurer Mark J. Stanisz ’05, who came to that meeting, says that Mahan has reneged on his pledge to make Harvard a “home” for its students.

“Mahan defended the termbill increase as a way to improve the quality of our House,” says Stanisz. “He kept saying that this was our home, not just a school. For one or two nights of entertainment, I felt he was really turning his back on the institution that shapes our House and home.”

“Let the people who know what students want more effectively engage students,” Nicolais says. “If you give them the resources, they will amaze you.”

But not all HoCos are dissatisfied with the new system.

Kirkland HoCo Treasurer Sarah L. Kennifer ’06 says she does not expect to need more than $1,500 for the semester anyway, noting that Mahan, also a Kirkland resident, informs them on council business.

Winthrop HoCo Co-Chair Caroline L. Gottesman ’05 says that Glazer, a proponent of the changes in HoCo funding and a Winthrop resident, is not on HoCo but “occasionally attends meetings and always keeps us up-to-date.”

“We were well informed last year that the [council] budget was inflated and would be returning to normal this year,” Gottesman writes in an e-mail.

Aside from criticisms on the changes in funding HoCos, there are also concerns about the cost of campus-wide events, which claim a chunk of this year’s council budget.

Mahan says the focus on these big events comes from reviewing the senior surveys of recent graduates, which he says called for more large-scale venues.

Last night’s Dylan concert, orchestrated by the Harvard Concert Commission (HCC) and council members, cost the council $30,000, but due to unexpectedly high ticket sales, the council expects to recover $15,000, about half of its anticipated losses.

But since every concert requires a financial loss, Nicolais says there should be more accountability.

“HCC was given a blank check,” Nicolais says. “The $15,000 allocation in September [for Breuer] and the $30,000 allocation for the [Dylan] concert were made without any consideration for how it would effect any of the other funding initiatives we had.”

Nicolais says evaluating the money spent on concerts ahead of time has been difficult because unlike in the past, this year’s council did not itemize expenditures in its budget.

“Without a clear budget, it’s difficult for council members to weigh the costs against the benefits of new spending,” he says.

Founded in 2000, HCC, which falls under the jurisdiction of the council, works to bring concerts and other large-scale events to campus.

Under HCC chair Justin H. Haan ’05, who is also a Crimson editor, the council sponsored a free Busta Rhymes concert last spring that cost the council and the administration $20,000 each. The concert was attended by about 3,000 people.

Nicolais says that not charging students for the concert was a mistake. He says that last year the Committee Fund ran out of money and the council’s $20,000 contribution to the Busta Rhymes concert mostly came from the Grants Fund, resulting in student groups’ only receiving $161,785.73 worth of the $180,000 set aside for them.

But Haan, who has been a member of HCC since his freshman year, says that concert was a victory.

“Busta Rhymes was never intended to make money,” Haan says. “It was intended to be a community-building event.”

While these type of concerts do take up a large portion of the budget, Capp says that the termbill hike means that there is a larger pie from which the council can draw to fund everyone.

“I don’t think it’s a strict tradeoff between HoCos and student groups,” Capp says. “The net effect of the termbill increase is that more money is going to both.”

Student groups—including the Harvard Democrats and the Harvard Republicans which this year requested the largest grants—have been, for the most part, pleased with their funding.

“I know the UC has gotten a lot more requests because people feel entitled due to the termbill hike,” says Harvard Dems Treasurer Angie A. Guerrero ’05.

While her group received $1,000 less than they requested this semester for election-related projects, Guerrero says she was happy with the funding: “It ended up working out well for us.”

“The UC has been generous,” says Vijay Yanamadala ’07, who is treasurer of Dharma, another major grant recipient. “We didn’t get what we requested, but it’s understandable.”

Student group leaders praise the council’s decision to make the grant process more efficient by making it a weekly cycle, instead of a once-a-semester endeavor.

“With semester lump amounts, it’s easier to overestimate,” Truesdell says. “And that takes away from funding other student groups.”