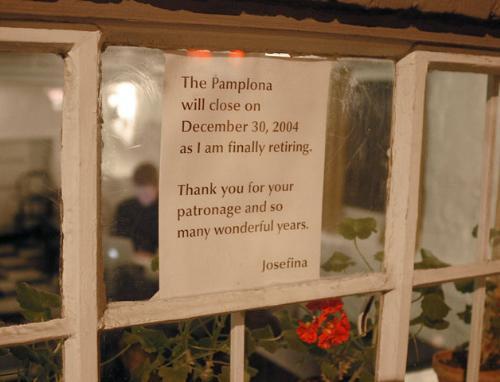 A sign in the window of Cafe Pamplona on Bow Street informs patrons that the owner will be retiring and closing the cafe at the end of the year.
By Wendy D. Widman, Crimson Staff Writer

Before the green rings of Starbucks lassoed streetcorners around the square, Josefina Yangues oversaw the convergence of coffee and conversation in the white-walled basement of her three-story house on Bow Street.

But after 47 years of serving intellectuals coffee and an old-world ambience, Yangues, who is 88, has decided to retire from her position as the owner and overseer of Cafe Pamplona. The cafe will close at the end of the year.

“We had the first espresso machine in Cambridge,” she said, reflecting on the years she has poured into the small cafe. “It breaks my heart that I have to close, but it’s a lot of work.”

The owner’s heart isn’t the only one that will break. Yesterday, patrons who have frequented the cafe, some for many years, expressed remorse (and, after a reporter initially brushed past “the regulars,” indignation).

“If this place closes, the real Harvard Square is completely buried,” said David Brennan, who has come to the cafe since the 1970s. “The free-floating intellectuals may have no place to float free.”

Though Yangues is planning to relinquish her oversight of the cafe, she said that she will continue to reside in the house and intends to lease the serving space to a new, not-yet-determined owner who she hopes will uphold the Pamplona tradition.

“Everyone has different tastes,” she said, leaning over a bare countertop by the espresso machine. “I’m from Spain. I have a different idea of coffee houses.”

Cambridge residents and college students have warmed to Yangues’ vision, and hoped the place would maintain its signature feel.

“I would like to see this place keep its ambience,” said Cambridge resident Julianna Sykley, who has come to Pamplona almost daily since 1969. “There’s no music, no internet connection. It’s the perfect place to read, study, chit chat and solve the world’s problems.”

Ronen E. Mukamel ’05 sat at the next table struggling with Algebraic Geometry.

“I love how simple it is here—the library’s too quiet,” he said, looking up from his work. “This is just the right amount of noise.”

“It’s the only place in the square where people count their tips out in pennies,” Joeseph Goldstein ’04 wrote in an e-mail. He said he used to spend many hours at the cafe, especially during the warmer months, when Yangues sets up tables and umbrellas on the sidewalk outside.

“We’re lucky to have space outside in Cambridge,” Yangues said. “Before Cambridge was a beautiful village, but everything has to change.”

With all of her efforts, Pamplona has outlived several other similar Cambridge institutions.

Yangues cheerfully remembered coffee houses of Cambridge-past, like Mozart’s—which was owned by Harvard students in Eliot House—and the Grinder.

“They ground their coffee by hand, it was so long ago,” she joked. “But it was really beautiful. The beatniks used to read their poetry and discuss their ideas there.”

Yangues has worked hard to keep the old world feel of Pamplona alive.

Though she has made small changes over time, like hiring women waiters and adding tapas to a menu that once included only coffee and pastries, the simple decor and atmosphere of the cafe has stayed true to form.

“I’ve had the same kind of flowers in the window for 47 years,” Yangues said, motioning towards a row of potted geraniums.