At debate, candidates for top positions argue over Council’s future 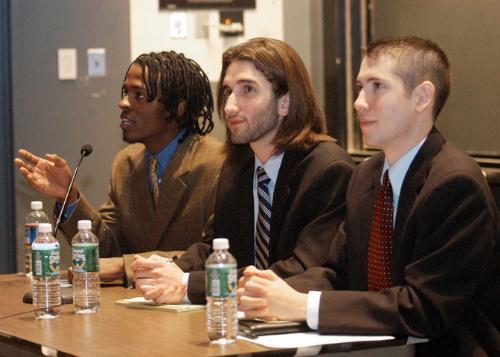 Past experience and priorities for the future comprised the core of last night’s debate for the Undergraduate Council presidency and vice presidency.

With voting beginning Monday and lasting through the end of next week, the debate offered the candidates a forum to talk about issues such as House life, the curricular review and structural changes to the council in front of several dozen students assembled in the Science Center.

“We need to increase the diversity of ideas on this campus, so that students can learn from each other,” Moore said.

“Alleviating the student space crisis is our number one priority, along with ensuring that there is a cohesive student voice in the curricular review,” said Glazer, who is a third-year council member.

“That is incredibly important as the faculty votes on [the curricular review] in the coming semester,” Glazer said. Financial Committee Chair Teo P. Nicolais ’06, who has been on the council for two years, said that his focus as president would be “bringing the council and the community together.”

Nicolais said that he would hold biweekly meetings with the House Committees (HoCos) and work with the prefect program and student groups to “bring the council and community together.”

Nicolais had to defend the fact that his running mate, Samita A. Mannapperuma ’06, is also his girlfriend.

“We share a vision,” Nicolais said, explaining that his relationship with Mannapperuma would not jeopardize their ability to lead the council.

“We will show this campus and this council things that have never been seen before,” he said, eliciting laughter from the crowd.

Questions to the vice presidential candidates focused on council experience and eligibility to lead the future council.

Council Treasurer Clay T. Capp ’06, who is Glazer’s running mate, came under criticism for the 93 council checks to HoCos and student groups that bounced last May.

“There are two checks out of a hundred that caused trouble,” Capp said, adding that he had begun providing a weekly update of council expenditures and creating a reserve fund to prevent the council from overdrawing in the future.

Mannapperuma said that the crucial factor she would bring to council leadership was her involvement with Currier HoCo and student groups, including H-Club and Harvard Women in Business.

“I bring a diverse and well-rounded perspective to council leadership,” she said. “I interact with students and know what students want.”

Ian W. Nichols ’06 said that his five-semester service to FiCom provided him with the experience to lead the council. “Quite frankly, I think FiCom is the most important,” Nichols said. “Currently there is no FiCom representation...I think that’s wrong.”

The format of this year’s council debate differed from last year in that the moderators—former council members Joshua A. Barro ’05, Joshua L. Stern ’05 and Jack P. McCambridge ’06—guided the debate by asking the candidates specific questions based on their College and council experiences.

Stern said that the moderators intended to provide a level playing field by comparing questions with one another before the debate.

“It was our opportunity for us who know the candidates...to highlight things that are unclear and things that people are concerned about,” Stern said.