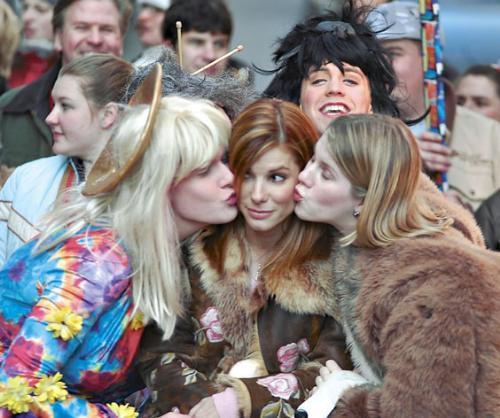 Sandra Bullock was all smiles as she paraded yesterday through Harvard Square on her way to the notoriously wacky ceremony to honor her as the Hasty Pudding Woman of the Year.

Wearing a long suede coat with a fur collar, Bullock rode through the streets of Cambridge in a black Volvo convertible surrounded by 13 Hasty Pudding Theatricals’ members dressed in their traditional drag.

From live cows to the University Band and the runner-up to Miss Massachusetts 2004, the procession included an eclectic variety of students and entertainers.

Throngs of students and locals braved the cold, lining the streets and nearby balconies to catch a glimpse of the actress.

As security cleared the way for the star of blockbusters like Speed and Miss Congeniality, Bullock laughed as her entourage chanted “We love you Sandra!” and an unidentified fan threw a stuffed pig into her car.

Bullock had to do a lot more than take a lap around Harvard Square to earn her “pudding pot” in the 54th annual ceremony recognizing her “lasting and impressive contribution to the world of entertainment.”

Theatricals President Clare Putnam ’04 and Cast Vice President John Blickstead ’06 hosted a roast of actress, asking Bullock to prove that she deserved the pudding pot by recreating moments from what Blickstead called “an embarrassing past that included movies like Practical Magic and Speed 2: Cruise Control.”

Calmly taking to the stage, Bullock was asked to use her sexiest pick-up lines on a “socially-awkward” Harvard student—Chris B. Moffo ’04, a cast member wearing a bulky body-builder costume and leather pants. “I need some alcohol for this!” she said.

Encouraged by Blickstead to “use your body,” Bullock walked up behind Moffo and did something out of the view of the audience for her first pick-up line.

Bullock then shared an intimate dance with Moffo to “Love Potion Number 9,” the theme song from her early movie of the same name.

Putnam and Blickstead still denied her the pot, however, and proceeded to direct her through farcical reenactments of some of her most noteworthy on-screen roles.

As a tribute to her part in Speed, she was asked to diffuse a “bomb” while riding an exercise bike—not by keeping the bike above 50 miles per hour, but by imitating Hugh Grant.

She apologized in advance to her Two Weeks Notice co-star before flipping her hair and saying, “Oh buggah!”

Bullock finally earned the pot in a recreation of the talent segment from Miss Congeniality, by belting out a verse of “Look at me, I’m Sandra B,” to the tune of the famous song from Grease.

When the emcees finally presented her with the pudding pot, Bullock joked about the honor of the award.

“I’m going to make some pudding to fill this pot so that I can always remember the day I finally got to Harvard through humiliation,” she said.

“It will be displayed with pride. It’s silly but I think I earned this one.”

In a press conference after the ceremony, Bullock expressed how much she enjoyed the afternoon’s flamboyant festivities.

“I’ve always loved theater and the antics of theater people,” she said. “This was such a great experience.”

Bullock said she enjoyed a “wine lunch” with members of the Theatricals before the parade, and looked forward to “drinking and dancing” with the cast later that night.

Along with her pudding pot, Bullock took home a $5,000 gift basket filled with food, cosmetics and clothing from local Harvard Square merchants.

The Pudding will honor Robert Downey Jr. in its Man of the Year ceremony next Thursday, Feb. 19. Following the presentation, the Pudding will premiere its new show, HPT 156, As the Word Turns.