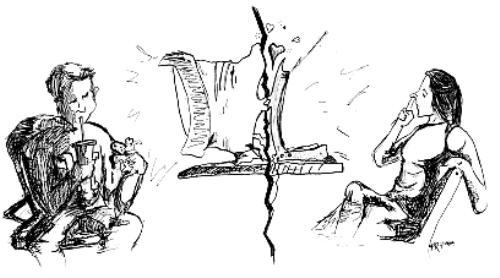 Last week while lunching in Annenberg, a young man approached me and did the unspeakable. Though not a friend of mine, or even an acquaintance, this bold stranger had the courage to sit down and join me for lunch. Even more surprising, we carried on an interesting conversation; and now, I can say this young man is my friend.

It later occurred to me that there’s no good reason why his move to sit with someone he doesn’t know should be regarded as peculiar or remarkable. After all, wasn’t that how we all made friends during those distant first weeks of school? Yet, it seems that sometime between then and now, an unfortunate transformation occurred. That is, we solidified social networks to the point that most of us only feel comfortable dining or conversing with people we already know.

But as if this showing of epicurean social awkwardness weren’t enough, I found even greater cause for concern when, later that day, I found my inbox brimming with e-mails bearing the subject “So-and-so has listed you as a friend.” I was shocked. Since when, I wondered, did it become commonplace to “confirm”—online, I might add—that someone is your friend? I wondered whether the rigidity of our environment, in which it’s uncommon for strangers to dine together, might have spawned such wholehearted acceptance of this impersonal medium where you “create an online network of friends.” The eagerness with which Harvard students have logged onto thefacebook.com raises the concern that all the time invested in our online interactions might be sapping our energy and detracting from the value we place on genuine human interactions.

The advent of crimsonhookups.com only added to my suspicion. Perhaps I’m an idealist to think that romance is about flirting, dating or, at the very least, debauched dancing in a crowded suite before it leads to any physical activity. With an online network where students are prompted to enter the e-mail addresses of up to 10 people they would like to “hook up” with, we no longer have to work up the courage to chat with that cute boy in section or risk rejection when asking a hot girl to dance. What a shame.

There are, of course, advantages to thefacebook.com, and perhaps even crimsonhookups.com. Students were united in their demand for an all-University online facebook, to make it easier to find individuals’ stats. Indeed, it is useful to find out who’s in my classes, and looking up my friends’ profiles is an entertaining mode of procrastination. And perhaps crimsonhookups.com might satisfy the complaints of those who claim they aren’t “getting any”—though I’d argue that it’s a rather unhealthy substitute for genuine physical interaction.

Yet despite any benefits, the online networks undoubtedly pose the threat of serving as a substitute for what I envisioned college would be all about: getting to know people, in person. At a school where many of us spend way too many hours in front of a computer, it seems all the more important that we tear ourselves away from our screens, get outside our rooms and actually meet people. Why not sit next to someone you don’t know next time you’re in a dining hall, or visit that kid you met on FOP but never quite got around to hanging out with?

After all, do we really want live in a community where 17-to-23-year-olds feel more comfortable “poking” friends of friends online, than approaching them in a dining hall and striking up a conversation? I certainly hope not.