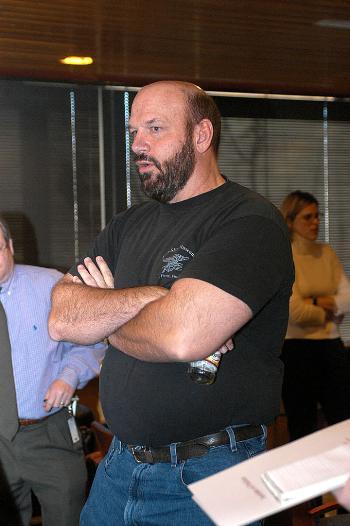 Professional wrestler and former Minnesota Gov. Jesse Ventura is introduced yesterday along with the other new spring fellows at the Institute of Politics.
By Kenneth D. Schultz, Contributing Writer

Professional wrestler and former Minnesota Governor Jesse Ventura has garnered the most media attention of this spring’s fellows at Harvard’s Institute of Politics (IOP), but he’s surrounded by a seasoned cadre of politicos who will provide insights into this year’s presidential election: an expert on youth and Hollywood perspectives on politics, a longtime Democratic strategist, the Washington bureau chief of the Chicago Sun-Times, a former president of the U.S. Conference of Mayors and an expert on political mobilization.

While Ventura headlines this semester’s cast of characters, Glickman believes that Ventura will complement rather than overshadow the group.

“None of the fellows are shrinking violets,” he said. “This is as diverse and interesting a group as we’ve ever had.”

The primary purposes of the fellows program are to have experienced operators interact with students and to allow the fellows the opportunity to engage in the intellectual life of the Harvard community. Resident fellows lead weekly not-for-credit study groups on topics related to their experiences and expertise.

“One of our top priorities when selecting fellows is identifying individuals who are not only on the cutting edge of their crafts, but will also be eager to work closely with students over the course of the semester,” IOP President Ilan T. Graff ’05 wrote in an e-mail message.

But though rosters of resident fellows have routinely boasted prominent political experts, the ability to offer “an insider’s look” at the presidential election was an important selection criterion in this highly-charged political year, according to Graff.

“More so than at any other time, young people on this campus and across the country are going to be focused on politics, and we hope to channel that energy into a renewed sense of the value of political engagement,” he said.

Lynn Sweet, the Sun-Times Bureau Chief, sees her fellowship as a “once in a lifetime opportunity” to reflect on the role of her profession in the political process. Her study group will follow the 2004 presidential campaign from the media’s perspective, to help students “connect the dots” as the nominating process and election unfold.

Harvard’s selection of Ventura has attracted national media attention since it was announced last month. Though he did not specifically describe the content of his study group, he said he will focus on terrorism, the media and his experience challenging two-party politics.

In 1998, Ventura won the Minnesota gubernatorial race as a third-party candidate on the Reform party ticket.

He said he looked forward to his fellowship at Harvard.

“It’s a tremendous opportunity,” Ventura said. “If you asked a boy from southern Minnesota if he would one day attend Harvard, he’d laugh and say no.”

Steve Jarding has worked on and advised congressional and presidential campaigns for a slew of Democratic candidates over the past 25 years.

“Outside of Washington, D.C., there may not be a better political hotbed in the country,” he said.

The intersection of politics and Hollywood will be the focus of a study group led by Meredith Bagby ’95, who has worked as an author, a journalist and most recently a creative executive with DreamWorks SKG, a film production company. Bagby said that she got her first taste of politics as an undergraduate at the IOP, and that she seeks to turn her generation on to public life through a blend of entertainment and journalism.

Gary Flowers, vice president of programs at Rev. Jesse Jackson’s Rainbow/PUSH coalition, will address coalition building. Victor Ashe, the past president of the U.S. Conference of Mayors who served as mayor of Knoxville, Tenn. for 16 years, will focus on state and local politics, and specifically the role of mayors in the post-Sept. 11 era.

In addition to the six resident fellows, five visiting fellows will lead activities with students during a short portion of the semester.

Alistair Campbell, who served as press secretary and communications director for British Prime Minister Tony Blair for nearly a decade, will visit Harvard from April 12 to 14. Campbell resigned last year amidst a firestorm over Britain’s decision to join the war in Iraq.

Bobby Jindal, the former assistant secretary of Health and Human Services, waged an unsuccessful bid for governor of Louisiana last November, and recently launched a bid for Congress in Louisiana. He is scheduled to serve as a fellow from Feb. 23 to March 12.

It is yet to be determined when Bill Luther, former four-term Democratic congressman from Minnesota, will serve.

As part of its student outreach efforts, the IOP will host a forum with the new resident fellows on Weds., Feb. 11, entitled “Why I’m Jazzed About Politics,” after which students will have a chance to meet the fellows. The study groups, which begin on Feb. 16, are open to undergraduates, graduate students and members of the community.