The Iron Curtain Lowers Over U. Hall 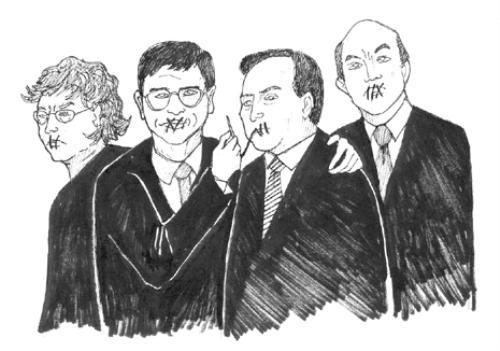 No journalist is ever satisfied with the level of access and information provided to him or her, and indeed, during our three years as Crimson reporters covering the Harvard administration, we were often frustrated by the pervasive “no comment” and the thoroughly scripted party line. At the same time, we understood that this frustration came with the territory of our job: to inform and involve the wider community in decisions which officials might prefer be conducted behind closed doors.

Yet over the course of the last year, as The Crimson’s managing editor and associate managing editor, we saw a level of secrecy enshroud the governance process of the Faculty of Arts and Sciences (FAS) like none we had witnessed before. Information control has become a preoccupation within the Harvard administration, one that threatens to seriously stifle meaningful discussion and debate over the policy decisions that shape this University.

In the name of streamlining information delivery, spokespeople have taken control of all media requests, only to repeatedly thwart our ability to gain the information we needed in a timely fashion. Coming from press officers, the information provided was by definition second-hand and often incomplete. More alarmingly, a number of attempts to block our reporters’ access to key administrators and to discourage professors from speaking to student journalists prevented us from accurately and thoroughly reporting on such important matters as tenure appointments, Allston planning and the financial health of FAS.

We continue to recognize that journalists and the officials they cover are bound to put differing weights on the importance of openness and access, and we are aware that our criticisms risk being dismissed as self-important whines. But we also believe that the administration does students, faculty and other community members a disservice when it limits the transparency of its operation.

One of the most central institutions to FAS’ operation is the Faculty Council, the 18-member body of professors that advises Dean of the Faculty William C. Kirby and approves the docket for Faculty meetings. No policy proposal, from implementing a preregistration system to changing the procedures for investigating allegations of sexual assault, is presented to the full Faculty without being thoroughly vetted by the council. As the full Faculty has in recent times almost always unanimously approved legislation presented to it, reporting on council meetings is essential to our ability to open debate to the wider community.

Unfortunately, we’ve found it increasingly difficult to do such reporting. On several occasions, council members declined to comment to The Crimson for the specific reason that they did not want to anger Kirby or other members of the administration. We deeply respect the right of sources to decline comment when they are contacted by Crimson reporters, but would argue against the climate of secrecy being imposed from the top down. We understand the need for the administration to occasionally designate some topics—like disciplinary cases—confidential. But such measures are abused when they are applied to policy debates, as occurred this fall regarding a discussion of the University’s plans for Allston.

The council was created out of the political turmoil of the 1960s to make the legislative process more efficient, not more secretive; it was a recognition that hundreds of Faculty members could not work out the fine details of legislation that led to the council’s formation, not a belief that all were not entitled to be involved. Closing off The Crimson’s access to the council’s policy discussions also denies professors the right to publicly examine what arguments and opinions their elected representatives are offering on the most important decisions facing the University.

What’s more, such moves leave The Crimson with a single source of information about these meetings: FAS Communications Director Robert Mitchell. Though we appreciate the briefings offered by Mitchell after each meeting, it would be journalistically irresponsible for us to report on these meetings using a single unnamed source with a clear agenda driving his presentation.

The growing lack of transparency within FAS is also exemplified by The Crimson’s repeatedly unsuccessful efforts to schedule an interview with the Faculty’s chief financial officer, Associate Dean for Finance Cheryl A. Hoffman-Bray.

The Faculty is currently facing a harsh financial climate—what Kirby himself has called “a time of serious constraint.” We think coverage of how Kirby and his administration are, in the dean’s words, “holding down expenses and redirecting spending” would be of great interest to this community. But The Crimson has been blocked from doing such reporting. Despite roughly nine requests, for nearly a year The Crimson was denied access to Hoffman-Bray after Kirby announced the Faculty’s shaky financial status last February. We were granted interviews by the financial officers from across the University—but not at FAS, the school that is of greatest interest and importance to our readers. This week, we have finally nailed down a date to meet with Hoffman-Bray—but on the grounds that the meeting will be limited to background information about the budget and finances of FAS.

Sadly, this pattern has been repeated with several other FAS administrators whom The Crimson has tried to interview over the last year. Several attempts last spring to schedule an interview with Nancy L. Maull, the executive dean of the Faculty charged with leading the restructuring of the College administration, were unsuccessful, and it took more than a month this winter to schedule an interview with Associate Dean of the Faculty for Physical Planning David A. Zewinski ’76. Both are officials who are directly involved in issues of vital interest to our readers and who can provide the kind of context and background that can’t be summed up in a spokesperson’s two-line sound bite.

Meanwhile, an over-reliance on spokespeople and a skittishness about releasing even non-controversial information has made it seem like the administration is trying to control information for the sake of control alone. Even the simplest requests, ones that used to be easily and efficiently handled by relevant administrators, are frequently snatched up by communications officers who place them in what we must imagine to be a very large waste-paper basket—for we rarely see any satisfactory response. Last spring, a simple request for a list of tenure appointments over the 2002-2003 academic year, made several weeks in advance of deadline, was not met despite countless follow-up e-mails. More recently, reporters looking into the nationwide search for a divisional FAS dean of the life sciences were denied the names of the individuals on the search committee. Having been members of the team of reporters who covered Harvard’s presidential search three years ago, we’re quite familiar with less-than-talkative members of such committees, but never in our three years as reporters have we been denied access to even the names of the individuals staffing the search.

Several attempts to bring this trend to the attention of top administrators have met with little success. These individuals seem incapable or unwilling to acknowledge that new procedures and attitudes represent a blow to transparency, and that this is a problem. Our readers have a right to know that the information they read is not as accurate or as thoroughly reported as it could be.