Private Eyes explores truth and falsehood through a love triangle 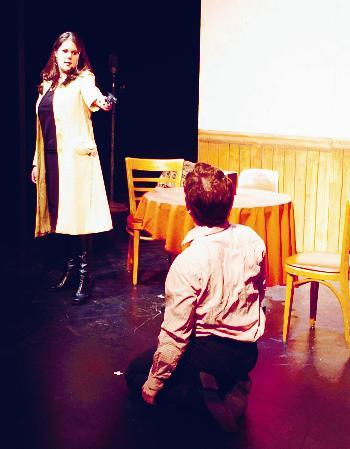 A dynamic script and creative staging contributed to this weekend’s insightful and polished performance of Private Eyes. Exploring the division between truth and falsity, imagination and reality, the intriguing plot kept the audience both amused and guessing. An innovative reframing of the classic love triangle between leading lady, director and leading man, this staging was refreshingly conscious of its niche as part-parody, part-remake.

Chelsea Toder’s unflinching portrayal of Lisa, the conflicted leading lady caught between husband/leading man (Sean R. Fredricks ’07) and her lover/director (Daniel L. Goodkin ‘06), was passionate and convincing in her attention to detail. However, Fredricks might be awarded the honors of the evening for his versatility and effortless energy. Fredricks’s Matthew was persuasively compassionate, angry, deluded and heartfelt by turns, giving a well-considered performance replete with a depth of emotional complexity.

By contrast, Goodkin’s Adrian was stiff and at times ridiculous in the obviousness of his effort. The clipped British accent and lack of sensitivity to the script’s humor resulted in a forced and unconvincing performance. Adrian’s downfall was a result of consistent overacting although the few lines delivered simply and spontaneously gave a brief glimpse of the possibility.

Although relatively one-dimensional, junior Erica R. Lipez’s Cory, the private detective/spurned wife was solid in execution. Sergio R. Martinez ’05 began the evening effortlessly as Frank the therapist, rattling off one-liners with a refreshing sense of irony. As the play wore on, however, Martinez failed to develop his role and exploit the full potential of his well-written lines. Line after line repeated in the same sing-song manner began to grow tiresome soon into the second act.

Private Eyes was superbly done and a worthwhile escape into the world of psychologically dysfunctional relationships. Well-chosen musical accompaniment was indicative of a sophisticated production. The only blemish in an otherwise smooth performance was a minor set fiasco in the last act (in the Saturday night performance) which was dealt with quickly and professionally, although the charming Toder could not completely suppress a slightly out-of-character giggle. She recovered, the set was righted, the play ended and we emerged from the theater sadder, wiser and more secure in our own normality, reluctantly stepping back over the line into the real world. Dysfunction can be a beautiful and seductive thing, and Private Eyes makes us consider that perhaps, just perhaps, normality may be a tad overrated.