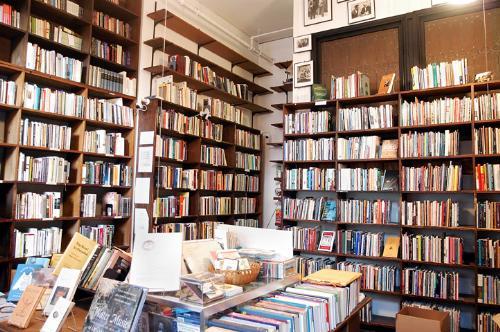 Grolier’s was once the haunt of e.e. cummings ’15, T.S. Eliot ’10 and Alan Ginsberg.
By Claire Provost, Crimson Staff Writer

The book is about to close on the nation’s oldest all-poetry store, as the Grolier Poetry Book Shop is forced under by competition from chain bookstores and the Internet.

First opened in 1927, the store at 6 Plympton St. was once a haunt of famous poets like e. e. cummings ’15, T. S. Eliot ’10 and Allen Ginsberg. It is currently one of only two for-profit poetry-only bookstores left in the country.

Louisa Solano, the store’s owner, remembers the days when her shop was “almost unlivable,” packed with people reading books and discussing poetry.

But last Saturday, few customers wandered in. The store, which boasts over 15,000 titles, now sees as few as 20 customers per day. This lack of foot traffic, along with increasing competition and a slowing economy, has caused serious financial trouble for Grolier.

Much of Grolier’s business used to be mail-order purchases, but with the increase in online shopping, it has been virtually phased out. Though the store tried revitalizing sales with a website, it desperately needs proper organization, design and maintenance, says Solano.

Solano, who is also a member of the Adams House Senior Common Room, had originally planned to close the store last January but media coverage of the store’s closing brought a boost in sales.

This support and renewed interest has allowed Grolier to stay afloat if only temporarily.

“I really stay open day-by-day and rely on daily sales to do that,” Solano says. “It keeps me going until I can find a buyer.”

Amidst the store’s imposing financial troubles, Solano, who has owned and managed the one-room store for 30 years, maintains some hope. “Even though we are in some trouble here, there’s always a certain amount of hilarity, ” she says.

On Saturday, former Adams House Senior Tutor John Hildebidle, provided some of this comic relief. Hildebidle, who is a friend of Solano’s and a Professor of Literature at MIT, entertained customers with haikus about curried chicken.

He praised Solano’s tremendous ability to find poets and poetry that suited her customers.

Solano draws her clientele mainly from students at Brandeis, Bentley, Lesley, Harvard and MIT, many of whom want books for advanced courses in poetry and literature.

Other customers are intent on becoming practicing poets.

But Solano says her favorite customers are the true poetry readers, old and new. One of her favorite parts of her job is “getting someone who’s never read poetry to start.”

Solano was a 15-year-old high school student when she first entered Grolier, but she was already a poetry lover. Now she helps customers locate specific anthologies and tries to find concrete solutions to their often abstract questions.

She remembers getting a request for a book of poems that a groom could use at a wedding ceremony.

She quickly responded to the request for “something rye but not insulting, light but serious,” by thumbing through works by Ogden Nash and Dorothy Parker.

“I know how to suit poems to people,” she says.

Solano, who is characteristically over-protective of her books, prohibits customers from bringing coffee near them and winces when they chew gum in the store. She has become such a celebrity in poetry circles that she says some people come into the store with obscure requests just to engage her in debate or conversation about poetry.

She pauses in her reminiscences when a couple of young customers wanders into the Grolier, “just browsing.” Though hoping they would actually make purchases at the end of the visit, Solano invites them to help themselves to a pile of old literary magazines.

Solano sees the Grolier’s financial trouble as indicative of an overall change in Harvard Square. She says that the “imaginative atmosphere” of the old Harvard Square has been pushed out by chain stores. And she complains that things like poetry workshops have almost all been transferred from the community to the university.

Solano works to contribute to the literary community by promoting poetry through regular readings in the Adams House Senior Common Room and by awarding an annual Grolier Poetry Prize.

But good poetry does not always make for good business. And Solano seems to realize this as a page turns on her store.

She acknowledges the support she received from friends and patrons. “But moral support unfortunately doesn’t pay the bills,” she says.

Solano hopes that the Grolier’s location will soon receive a blue marker from the Cambridge Historical Society, dedicating it as a historical landmark.

“I also want my name on the street,” she adds as a joke.