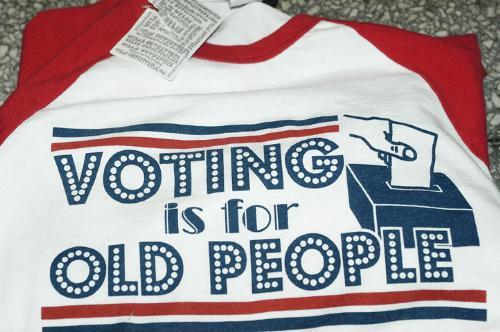 The Urban Outfitters T-shirt, which sells for $28, has angered members of Harvard's Institute of Politics.
By Laura A. Morris, Crimson Staff Writer

Leaders of Harvard’s Institute of Politics (IOP) sent a letter yesterday condemning the clothing store Urban Outfitters for selling a T-shirt that they say discourages political participation among young people.

“In this pivotal election year, this shirt makes the wrong statement at the wrong time to America’s youth,” Glickman and Graff wrote.

Later yesterday, Graff called the T-shirt “part of a culture of apathy that the IOP exists to counter.”

The letter suggested “Voting Rocks!” as an alternative slogan and offered to work with the store to “suggest alternative products that send the right message to America’s young people.”

Designed by 26-year-old Yale alum John Foster-Keddie, the controversial T-shirt is a “vintage tee with a pinch of irony,” according to the Urban Outfitters website.

But the IOP is not the only group to disapprove of the shirt’s irony.

Youth-oriented organizations like Punkvote.com and MTV’s Rock the Vote have criticized Urban Outfitters for marketing “cynicism.”

“I find your shirt ‘Voting Is For Old People’ to be an anti-American abomination,” Punkvote.com board member Al Jourgensen wrote in an open letter. “It is a disgusting effort to reap profit from cynicism.”

Representatives of the clothing retailer, however, have said they had no intention of discouraging young people from voting.

Foster-Keddie, the creator of the T-shirt, told Newsday last week that “this shirt’s real intention is to sum up the current state of political affairs, pointing a finger at all of us who’ve been so apathetic in the past.”

An Urban Outfitters spokesperson declined a request for comment yesterday.

In a statement to the Associated Press, Urban Outfitters called the slogan “a statement meant to draw attention to the growing rift between politicians and their platforms and the concerns of young people in this country.”

“We clearly never intended to discourage anyone from actually voting,” the statement continued.

But the letter from Graff and Glickman charged that the T-shirt’s slogan discounts signs that young people are not politically apathetic.

“Their enthusiasm for public service is on display daily in political campaigns across this country, and was thrust into the national spotlight by impressive youth turnout in the Iowa caucuses and many primaries held since,” the letter reads. “In our most recent survey, 82 percent of college students reported that they are planning to vote in this election.”

At the encouragement of the IOP, several Harvard students have called or sent e-mails to Urban Outfitters asking that the shirt be removed from store racks.

“People work very hard to make sure everyone gets a voice and that voice is ensured through civic participation,” said Paloma A. Zepeda ’06, who e-mailed the clothing store.

“To try and make it fashionable to opt out of determining the fate of your own country is irresponsible,” she said.