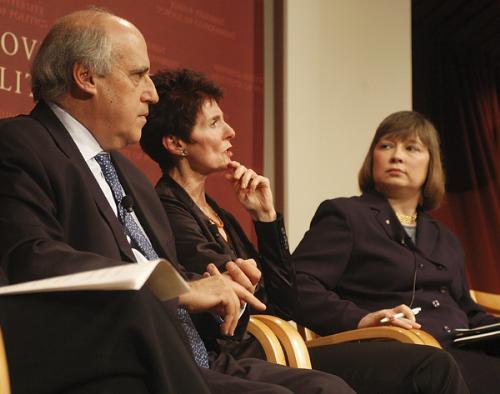 In an effort to avoid the passions that tend to overtake discussions on abortion, last night’s panel on “The Politics of Abortion” began with a promise to stick to political issues and keep passions at bay.

Politicians, professors, advocates, citizens, and students filled the John F. Kennedy, Jr. Forum for the discussion, moderated by Swanee Hunt, director of the Women and Public Policy Program at the John F. Kennedy School of Government.

Hunt began the talk by quoting former Institute of Politics (IOP) Director Alan Simpson, with a reminder that discussions in the Forum “are about raising consciousness—not about raising Cain.”

Former Congressman from Kentucky Romano Mazzoli, said the issue is always “vexing, meddlesome, and difficult—no one feels comfortable with it.” He said he struggled as a pro-life Congressman in the Democratic party. Quoting Kermit the Frog, he told the audience that “It ain’t easy being green,” isolated in a party dominated by pro-choicers, but said that he chose his position out of honesty.

IOP Director Dan Glickman said there is an inherent conflict between a politician’s personal beliefs and his duties to constituents.

“You always want to be loved,” he told a chuckling crowd, “but sometimes the more you try to get them to love you the less they will.”

Glickman said that abortion was used as an “organizing tool” to oust him from office in Kansas—as soon as abortion was raised as an issue, he suddenly found that people who were never politically active were calling for his defeat.

As Glickman and Mazzoli offered lessons from political experience, Kate Michelman, president of the National Abortion and Reproductive Rights Action League (NARAL), and Carol Tobias, political director of the National Right to Life Committee, each advocated an ideological position. Michelman, drawing nods and occasional applause, railed against the “Republican effort to undo the right to choose and the right of privacy.” To the loudest applause of the night, she said that deciding what a woman can do with her body is “not the position of a legislative body, with all due respect.”

Tobias, drawing nods and occasional applause from those who did not nod and applaud for Michelman, told the audience that she is happy that some people vote consistently for pro-life candidates.

“[It is] wonderful that there are people who are more concerned about unborn children than...their own welfare,” she said. She added that she was very optimistic for the future of the pro-life movement, pointing to the strength of the pro-life position among youth and the promise of developing technology to allow parents to see a child in utero, which she said would make it easier for them to consider the unborn child as a living human being.

After one audience member argued that “abortion is not a middle-issue”—that you’re either for life or against it—Glickman cautioned against this diametric division. He said that though many people have legitimate concerns about subtle abortion issues—like parental consent or so-called “partial birth abortions”—he lamented that the extremes of the debate prevent even-handed discussion.

After a poll of the audience revealed that nearly every person in the room felt “intensely” about abortion, one way or another, Glickman said that for a politician to ignore the passions of constituents, discuss issues, and vote on principles “defies the laws of nature.”

“That does not happen in this world!” he said.

The other panelists also lamented the political implications of the impassioned ideologies.

Mazzoli called it a “shame” that he could never be elected U.S. President on a Democratic ticket because he would fail the pro-choice “litmus test.” Michelman said, “If I had my druthers, abortion would not be in the political realm at all.”

Students noted the significance of the debate in an election year.

“It’s a crucial time to be having discussions like this. Single issues will be driving peoples’ decisions this election,” said Sonia A. Erlich, a Northeastern undergraduate.

Many of the audience members attended the discussion with a political group.

“We try to debate and organize on this issue,” said Thomas M. McSorley ’06, a member of the Harvard College Democrats. “It’s good to hear political experts—and not philosophers or ethicists—discuss how the nuts and bolts of abortion politics are shaped.” After one audience member argued that “abortion is not a middle-issue”—that you’re either for life or against it—Glickman cautioned against this diametric division. He said that though many people have legitimate concerns about subtle abortion issues—like parental consent or so-called “partial bith abortions”—he lamented that the extremes of the debate prevent even-handed discussion.