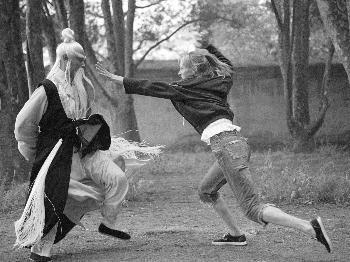 Quentin Tarantino may be an unapologetic sadist, but he is clearly a fetishist as well. Kill Bill, Vol. 2, the follow-up to his ghoulish and gaudy first volume, is an ode to the most cunning and sensuous lips ever to grace the screen.

The exacting curves of Uma Thurman’s outer mouth headline a marvelous cast of lips at the heart of Tarantino’s brazen and torrential work, which opens nationwide today. Under the lens of Robert Richardson, an emerging master of the close-up, Thurman’s lips star in Vol. 2 as though they were themselves a separate character. Indeed, an entire subplot could be drawn merely among the players’ lips, which Tarantino leaves under scrutiny through his final scene.

Thurman, whose name is revealed in Vol. 2 as Beatrix Kiddo, is joined by David Carradine, the eponymous Bill, whose own unassuming lips are exposed in intricate and dynamic detail. The folds of Carradine’s mouth, parched and aged, illustrate in wrinkles what tree stumps reveal in rings. With especially tight and focused shots, Tarantino gives full billing to Carrandine’s lips; in Vol. 2, we are first reintroduced to Bill’s lips tickling a flute, then to Bill himself. The gravity of each character’s lips is sealed at the Two Pines Wedding Chapel, when Bill (pretending to be Beatrix’s father) kisses his feigning daughter in an eerie scene that dares to surpass the sexual tension which famously transpired between Thurman and John Travolta in Pulp Fiction, Tarantino’s most famous and still superior work. And in a stirring, if jilted, closing moment, Bill’s inevitable fate is confirmed by a trickle of blood from his starring body part.

Surely most moviegoers will reject this lip thesis in favor of the fairly blatant kung fu theme which runs through—and, admittedly, uplifts—both volumes of Kill Bill. And certainly Tarantino has created a mildly epic tribute to his favored genre, pulling whole swaths of material from a host of films, most notably Five Fingers of Death. (The Good, the Bad, and the Ugly is also clearly an inspiration for a few specific shots.) But seen as the kung fu cowboy, Tarantino’s films always seem to fall flat with the suspicion that his work is not the product of genius, but of an uncanny number of late nights in front of the television. This view of Tarantino is perhaps his own fault, since in interviews he so often harps on the elements of pop culture in his films—on the cool. But Tarantino, the cool director, is not the man who concocted the stunning dialogue of Pulp Fiction, the pulsing narrative of Reservoir Dogs, or the lurching beauty of Kill Bill, Vol. 2. Those films will satiate a cool-deprived viewer, but their genius is the work of a far greater director. Tarantino deserves more credit than his most ardent fans will allow him.

Vol. 2 makes a compelling case for a more serious interpretation of Tarantino’s talent, and the film justifies the otherwise vapid (and very cool) Vol. 1, which should never have existed as a separate film. The commercial logistics of a four-hour movie aside, Kill Bill would have worked best as a single entity, the second half imbuing the first with a certain weight. Indeed, Tarantino’s lip fetish is itself enough to empower Vol. 2 with far more powerful scenes than Vol. 1: when a tied-up Beatrix must wrap her lips around a flashlight, the degrading image is worth more than any moment in the first volume. Here Tarantino employs the same technique as in Reservoir Dogs, where he subtly focused on his characters’ ears before slicing one off in the end. It’s a cruel trick, but a crafty one—and proof that Tarantino plays more than lip service to the art of film.