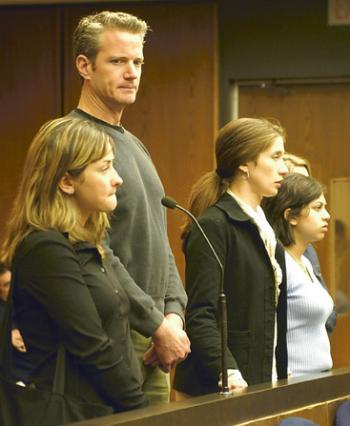 The pretrial date for the case against Dan Mathews, vice president of the People for the Ethical Treatment of Animals (PETA), was set for May 27 in a Middlesex County Court yesterday.

Two months ago, Mathews and five other demonstrators stripped down to colorful underwear and strategically placed tape in a Harvard Square protest that was part of PETA’s “Rather go naked than wear fur” campaign. The six were arrested for disorderly conduct and indecent exposure.

While Mathews had been optimistic the case would be dismissed, the judge ruled yesterday to have a pretrial hearing in late May, giving the prosecution the time it requested to assess the evidence and review the footage of the protest.

“It’s a big waste of our time,” said defense lawyer Michael A. Vitali. “There should not have been an arrest in the first place. The prosecution should look hard as to whether they should continue this case.”

The judge also ruled yesterday that Mathews and the five protesters arrested with him—Aryenish T. Birdie, Amy M. Thompson, Karla L. Waples, Brandi R. Valladolid, and Kristin M. Waller ’05—are not required to attend the next pretrial hearing because many of them live out of state.

Waller, a Pforzheimer House resident, declined to comment for this story.

The protesters were arrested while staging a near-naked pillow fight and shouting “Love in, Fur Out” to draw attention to their campaign against the mistreatment of animals.

The night before his pretrial hearing, Mathews sounded optimistic that the case would be dropped.

“It’s hilarious. It’s been a lot of fun,” said Mathews of his legal ordeal. “We’ve done these things all around the world and never gotten arrested.”

Mathews pointed to more daring protests organized by PETA in which protesters “make-out” under the banner “Vegetarians make better lovers.” In places like Omaha, Neb., he said, these tactics did not end in any arrests.

But in Cambridge he found himself locked up, if only briefly.

Mathews was in a joking mood minutes before the trial began, offering moisturizer to strangers in the courtroom. “It’s cruelty-free,” he said of the cream. Mathews and most of the other defendants smiled throughout the hearing.

After yesterday’s decision, Vitali said he and the prosecution will meet prior to the next scheduled hearing to negotiate a settlement.

—Staff writer Robin M. Peguero can be reached at peguero@fas.harvard.edu.