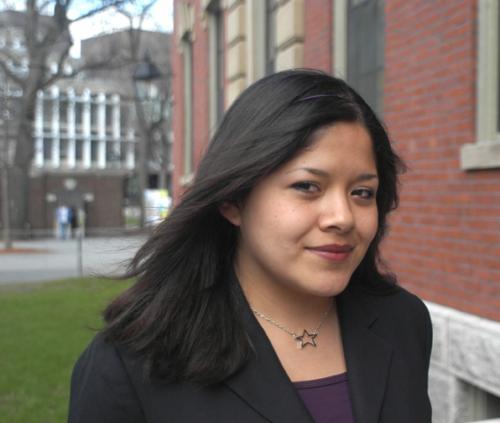 Like most of us at Harvard who sing, I was completely captivated by world of a capella at the jams we were all exposed to during pre-frosh weekend and freshmen week. However, after performing with the Opportunes for about a year, I quit because the extensive time commitment didn’t allow me to pursue other interests—mainly my dream of starting a Mariachi band here at school. I subsequently began singing, and continue to sing, with the Kuumba Singers. Singing with this group has been one the most fulfilling experiences I’ve had at Harvard.

To pursue my dream, with much difficulty, I officially registered to form a mariachi group and began recruiting people during my freshman year. Our first performance was during pre-frosh weekend of 2002. Since then, Mariachi Veritas de Harvard has become a musical group that is well known and loved around the University.

Furthermore, during the past two years, I have also been really energized by the organization of Presencia Latina, the first ever Latino Cultural Show at Harvard, which I helped put together. We felt it was about time Latinos really came together to celebrate their artistic heritage with music, song, dance, poetry, and, of course, food. For this show, I served as Assistant Director, and used my knowledge and experience as a performer and show director to contribute to this its success.

This has been an important year for the Mariachi Veritas de Harvard. Can you describe some of the latest developments?

We’ve had a great year. Not only have we been able to purchase more musical arrangements and recruit more musicians, we have also played on wonderful special occasions, such as the reception for Governor Sila Calderón of Puerto Rico. Preparing for these events has been hard work but very rewarding. In fact, for the governor’s reception, we arranged two songs from Puerto Rico and even had the entire audience singing!

The list goes on: In October, we played at RAZA’s Day of the Dead Celebration; in November, we shared the Cultural Rhythms stage with this year’s host George Lopez; in February, we headlined our first ever Mariachi Concert; in April, we collaborated with Ballet Foklórico de Aztlán in Presencia Latina. And we still have some great upcoming performances: Raza’s Cinco de Mayo Celebration this Saturday and two ARTS First performances. Even bigger things lie ahead: next year, we are planning to play a larger fall concert and record a CD.

Can you comment on the musical repertoire of Mariachi Veritas and how the band is unique on campus.

Mariachi is the traditional music of Mexico, but it is much, much more than what you hear at a random visit to Border Café. It is a 100 year-old musical and cultural tradition that has spread around Latin America and the world—there are even Mariachis in Iceland and Japan! In a few sung words or a short melody, all the pure emotions of people from true love to bitter resentment can be expressed. Beyond bringing a unique musical expression to Harvard, Mariachi Veritas brings tradition to the University and shares it with everyone. Unlike most other musical ensembles, all members play, sing, improvise, and lead the band at some point. Even a single song—heard or performed—is a truly unique experience.

Is there an untapped resource you find especially appealing at Harvard?

By far, the most inspired group on Campus is an organization called the Kuumba Singers of Harvard College. In my opinion, everyone should join Kuumba— or at least attend one concert before they graduate. It’s this huge diverse group of beautiful and talented people who sing to celebrate Black Creativity and Spirituality. There’s no auditions, no competition, no cliques, no negativity, just music.

What has been your most fulfilling artistic/academic experience?

Although each of my experiences has been fulfilling in its own way, the Mariachi Concert on April 10 was the most encouraging and satisfying because it showed me that there was a real place for Mariachi Veritas on this campus. The 15 people who performed had never sung with a Mariachi band before, proving to the 85 audience members that anyone can feel and love this music, even if they didn’t grow up with it. Although it was absolutely stressful, and I almost had a few breakdowns, it was absolutely worth it.

What do you find rewarding about performing? What inspires you, as a busy college student, to continue to participate in an art that requires such intense training?

Singing is my thing. It’s my passion, so anytime I can do it and do it well, I feel like I’m doing what I’m supposed to be doing. Whether I am singing with the Opportunes, Kuumba, the Mariachis, or even alone, I sing from the heart, and I’m happy. And that’s only half the story. Specifically referring to the performance of Mexican music, what has inspired me these last few years has been people’s reactions. Besides my parents, or my friends, a lot of different kinds of people have complimented me on my singing and my abilities as a performer. It is this support that has kept me motivated by reassuring me that there is value in my work: I’m teaching people about my Mexican heritage and, at the very least, I’m making many people happy.