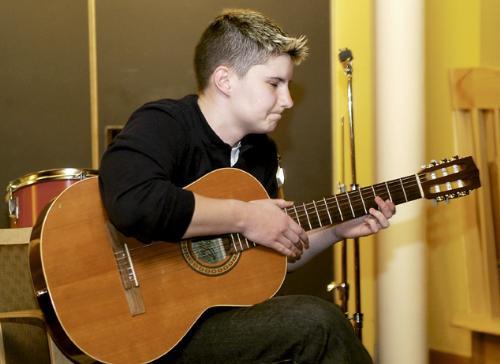 Mary K. Eagle ’06 strums her guitar at the kickoff of Gaypril 2004, a series of activities and parties organized by the Harvard BGLTSA for the month of April. The night featured musical guests, dramatic readings and storytelling.
By Claire Provost, Crimson Staff Writer

About 30 students gathered in Boylston Hall last night to kick off “Gaypril,” a month set to include gay pride celebrations, a day of silence to raise awareness about the prevalance of homophobia, and a panel of sadomasochism experts.

Gaypril, which has been hosted by the Bisexual, Gay, Lesbian, Transgender and Supporters Alliance (BGLTSA) for nearly a decade, serves to “promote the visibility and strength of a BGLTQ community on campus,” said co-chair Stephanie M. Skier ’05.

Last night’s kickoff included a series of open-mic performances in a warm and informal setting, though the microphone itself was broken.

Other BGLTSA board members read poetry from books and from personal writings.

Gaypril is unique at Harvard because “most other schools don’t have whole months, but most do have a Pride Week,” said BGLTSA Publicity Chair Adam P. Schneider ’07, who is also a Crimson editor.

In an event unique to this year’s Gaypril, BGLTSA will present a screening on April 26 of “Toilet Training,” a documentary about discriminiation linked to gender-segregated bathrooms, accompanied by findings from a study on bathroom access on and near campus. For the past few months the BGLTSA has conducted a thorough investigation of Harvard buildings and dorms to locate gender-neutral and gender-specific bathrooms.

“For transgendered people, going to a specific bathroom can be a very stigmatizing experience,” Schneider said.

Schneider said the group decided to unveil the results of the bathroom study this spring to ensure that they are released before plans for a new campus across the river in Allston are finalized.

He said that the creation of gender-neutral bathrooms would be “an easy thing to keep under consideration” when constructing buildings in Allston.

Other Gaypril events aim to identify the problem of “marginalization and oppression that exists as a result of stigmatization of queer sexuality and gender,” according to the BGLTSA website.

Gaypril will recognize and target issues of homophobia, biphobia and transphobia, particularly with its day of silence on April 21, followed by an anti-homophobia speak-out on April 22.

“We’ve come so far, but...its still a fight we have to continue,” said Skier, who is also a Crimson editor.

Skier also gave a special thanks to Timothy L. Lyons ’04, who is currently in the hospital recovering from bacterial meningitis, but was very involved in planning Gaypril.

Though June is traditionally the month dedicated to gay pride and awareness, Skier said that April was adopted as Harvard’s primary month for queer activism and organizing because school is still in session.