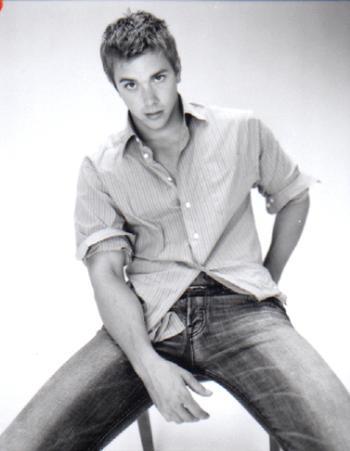 Harvard alum and rising star Steve J. Sandvoss ’02 has been earning rave reviews for his work and become an icon for some in the gay community.
By Irin Carmon, Crimson Staff Writer

Maybe it was beginner’s luck. Fresh out of Harvard, having swooped headlong into the pit of motion picture dreams that is Los Angeles, Steve J. Sandvoss ’02 stood in front of a casting agent for his very first Hollywood audition—and got the part.

In the recently released niche hit Latter Days, Sandvoss stars as an earnest Mormon missionary forced out of the closet when he falls in love with an L.A. gym queen. That day of the audition, his inexperience—both in Los Angeles and in film—worked in his favor.

“The character in the movie is new to L.A. and very naive and wide-eyed, and I probably was that,” he recalls. “I didn’t really know what I was doing. I had one friend in town and I was crashing there, driving my mom’s old station wagon. That might have helped.”

Sandvoss is no longer so unworldly, if he ever was so. The largely glowing reviews of his performance in Latter Days and the film’s several audience awards at gay and lesbian film festivals around the country have rapidly transformed him into a presence in young Hollywood. He’s shopping around a script and about to start shooting a bigger-budget film, about which he will only say that one of its executive producers recently won an Oscar.

It hasn’t hurt that Sandvoss, who like his co-star Wes Ramsey is heterosexual, has become something of a sex symbol in the gay press. One critic likened him to a “Viking pool boy,” while another gushed that he was the “stud of the hour.”

Sandvoss denies that he’s already reached iconic status in the gay community, but clearly has no problem with the attention: “Hey, if it happens, bring it on.”

Odds are Sandvoss’s mind was on other things when he arrived at Harvard as a first-year intending to groom himself for international business and study Mandarin Chinese. But luckily for the world’s Viking pool boy fans, he burned out on business fast.

“It was a typical case,” he says. “I went to prep school so by the time I got to freshman year, I didn’t want to do anything intellectual.”

He wound up concentrating in English and picking up theater for the first time. (His official biography points out that he studied at Harvard at the same time as Natalie Portman ’03, as well as listing credits in student productions of Romeo and Juliet, Julius Caesar, Ba’al, Galileo, and readings of his own work.) During college, Sandvoss acquired an agent in New York and did some commercials while an undergrad. By graduation, he’d openly acknowledged his desire to act for a living, and eventually switched allegiances to Los Angeles.

Accepting his first and leading role in a “gay movie” was a potentially risky move for a novice actor, but it’s worked to Sandvoss’s advantage.

“Hollywood’s so gay anyway,” he says, noting that the casting directors he comes before these days have either seen the movie or heard the buzz around it. “This was a low-budget, independent film with a great cast that had a niche audience and specific genre. If I’d done a low-budget sci-fi movie, even if it had a great cast, chances are the casting people would not have seen it.”

The film has opened up nation-wide debates about homosexuality and Mormonism, and Sandvoss, playing the boy torn between family, faith and love, has been there for some of them.

“In some of these places where it’s been seen, people come up to me afterwards bawling and say, this is my story, or that’s what happened to my son or my daughter,” says Sandvoss. “I get lots of fan mail where people really feel a personal connection to me, and that’s something that’s so rare, to actually have people appreciate your acting—it’s the profession of waiters and people who are starving.”

Though Latter Days plays to art house audiences, its form is deeply conventional, almost doggedly so. But for its gay and Mormon trappings, it could take its place alongside mainstream romantic comedies, from its setup (pretty boy bets he can seduce the saintly Mormon) to its lesson of love-as-redemption.

Director and screenwriter E. Jay Cox also wrote the script for Sweet Home Alabama, a movie even more at home with cliché that didn’t even make sense on its own terms. In Latter Days, he uses Sandvoss’s character to live out his nostalgia about his own homoerotic days as a Mormon missionary and self-described “little queer cowboy” growing up in Nevada.

Sandvoss says he didn’t take immediately to the story; he had trouble “buying” the stormy love story between the solemn missionary and superficial party boy, but after a few reads and meetings with the producer and director, he says he became a believer.

To prepare for the role, Sandvoss invited some Mormon missionaries to his home to watch them in action. “I didn’t tell them, we’re doing a movie about how your faith abuses people. I just sort of listened and watched.” But ultimately, Sandvoss says, becoming Elder Aaron Davis wasn’t too much of a stretch.

“He’s a sort of idealistic and naive 18-year-old kid. It’s not that hard to remember what that was like. Harvard people have that bipolar, idealistic-slash-skeptical character, so it pretty much fit.”

When it came time to shoot, Sandvoss was joined by fellow rookie Ramsey as well as a troupe of more established names like Mary Kay Place, Jacqueline Bisset and Joseph Gordon-Levitt. He says the director’s style allowed actors enough space to make their own decisions.

“It can be kind of detrimental to plan too much, to dig out the channels where your emotions are supposed to go and then force yourself into them,” he muses. “It’s much better to go in understanding where you’re going and what the scene’s about, and then do anything you want.”

And, he adds, “We shot on digital, so I didn’t have to worry about how expensive the film was. I could fuck it up ten times and it wouldn’t matter.”

The director intentionally saved the harder scenes for a few weeks into the process, once some sort of bond of trust had been established. Of course, “harder scenes” meant the sweat-sprayed sex scene, which was shot the same day as a chest-puffing basketball scene.

“That whole day we were just cracking jokes to break the ice about how in a few hours we were going to be mostly naked and writhing around,” remembers Sandvoss.

Sandvoss says he considered it a miracle he’d been cast at all, so he was ready to jump into the film without boundaries. “I thought, if I hold back at all, or if I’m scared that I’ll never work again because I played a gay character, if I’m scared that people from college will think I’m gay, then it’ll show and I’ll never work again because I’ll suck. So I’d better just get over what issues I have and just do it. And I did.”

In Sandvoss’s hands, the character’s lack of eloquence, part deliberate and part a function of the script’s weak points, becomes transformed into stumbling sweetness. And despite choppy pacing, awkwardly campy dialogue and a soundtrack that imposes emotional cues with all the subtlety of a tank, there’s plainly something there: genuine chemistry between Sandvoss and Ramsey, some sense that when they finally crumple in each other’s arms, it’s all for something much better than Hollywood-style inevitability.

-—Staff writer Irin Carmon can be reached at carmon@fas.harvard.edu.