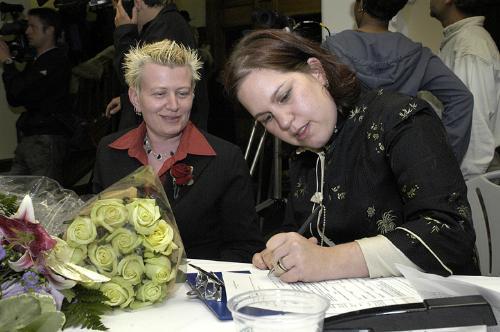 Brenda Morris and Eve Alpern of Rosendale, Mass. apply for a marriage license, making them one of over 260 couples to do so.
By Michael M. Grynbaum and Jessica R. Rubin-wills, Crimson Staff Writers

At the stroke of midnight, Cambridge became the first city in the nation to allow same-sex couples to file for state-sanctioned marriage licenses, throwing a party today at City Hall in the early morning hours complete with a three-tiered wedding cake, live music and over 260 same-sex couples.

Cities across Massachusetts will issue same-sex marriage licenses for the first time today, six months after the state Supreme Judicial Court (SJC) ruled that it is unconstitutional to prevent gay couples from marrying.

Marcia Hams and Susan Shepherd of Cambridge were the first couple to sign the forms declaring their intention to marry after waiting for 24 hours on the steps of City Hall.

“I’m trying not to faint at the moment,” said Hams, 56, after filing the forms. “We just really feel awesome.”

“I think we’ll really understand all this later,” Shepherd, 52, added. “This is not in any way or shape or form about us. All these people have worked to get us here.”

Cameras flashed, gay rights activists cheered and a group of Harvard students organized by the Bisexual, Gay, Lesbian, Transgender, and Supporters Alliance (BGLTSA) joined the thousands gathered outside to watch as each couple ascended the steps of City Hall last night.

Some holding flowers, others wiping away tears, couples saluted the crowd and raised their clasped hands in triumph.

The couples who file forms today will need to wait three days before receiving their licenses, unless they obtain a waiver of this waiting period in probate court. According to City Clerk E. Margaret Drury, these waivers are “fairly commonly granted.”

Although several members of the Cambridge City Council sought to begin granting marriage licenses immediately after the SJC’s November ruling, the city had to wait until the end of a 180-day court-mandated stay period. But councillors passed an order calling on the city clerk to issue licenses “as soon as legally possible,” which meant opening the offices at midnight on the day the ruling took effect.

“That we are here at this hour shows that you have kept your promise,” Arthur Lipkin of the Cambridge Lavender Alliance told the councillors last night at a ceremony in the packed City Hall chamber, standing next to a clock counting down the minutes until midnight.

Councillor E. Denise Simmons, one of the co-sponsors of the original resolution calling for immediate issuing if licenses, was among those waiting to file for a license early this morning, holding number 89.

“My order has been on the record for six months,” she said in an interview. “This is the realization of it.”

Couples filing for marriage face an uncertain future, as the state legislature voted in March in favor of a proposed constitutional amendment banning gay marriage but establishing civil unions. If the amendment passes another legislative session in 2005-2006, it will be put to a statewide referendum.

But the couples and their supporters last night focused on the positive.

State Sen. Jarrett T. Barrios ’90, a leading advocate of gay rights in the legislature who gave personal testimony against the proposed amendment, said that he and his partner would not be filing the paperwork today but would “wait until the rush dies down.”

“I just want to be here as part of history,” he said.

Lowell House Masters Diana L. Eck and Rev. Dorothy A. Austin joined the couples and their supporters who thronged the three floors of City Hall. The group varied widely in age and ethnicity, with women slightly outnumbering men.

Mayor Michael A. Sullivan opened the ceremony last night by noting that Cambridge had been at the forefront of gay rights before, voting previously to end discrimination based on sexual orientation and to establish one of the first domestic partnership ordinances.

“It is fitting that we come to this chamber tonight to celebrate an historical day in this Commonwealth, a day that extends rights and privileges and ends discrimination against gays and lesbians,” he said to applause.

In an invocation, Rev. Irene Monroe compared the beginning of gay marriage to past civil rights milestones such as Brown v. Board of Education and noted that rather than being pronounced husband and wife, couples could now choose to be pronounced spouse and spouse, husband and husband or wife and wife.

“But my favorite is this—I now pronounce you married,” she said, adding after a standing ovation, “under the laws of the Commonwealth of Massachusetts.”

The ceremony also included songs by several community choirs, including a rendition of the Beatles’ “Can’t Buy Me Love.”

Mary Bonauto of the Gay and Lesbian Advocates and Defenders, the lead attorney on behalf of the gay couples in the SJC case, spoke last night to a rousing ovation and chants of “Mary, Mary!”

DANCING IN THE STREETS

Outside, approximately 150 students joined members of the BGLTSA to show a festive solidarity for the couples awaiting licenses.

The procession began at the statue of John Harvard at 11:45 p.m., when Margaret C.D. Barusch ’06 addressed a cheering, singing crowd, composed largely of undergraduates and students from Harvard Law School, who then marched to City Hall accompanied by police officers.

Adam P. Schneider ’07, public relations chair for the BGLTSA, was sick but came anyway dressed in a coat and tie.

“Basically this is the culmination of our campus campaign for gay marriage,” said Schneider, also a Crimson editor. “We’re just going along to support all the happy couples who are being recognized as equals by not only their peers, but society as a whole.”

The crowd of supporters included seven members of the Harvard Republican Club (HRC), with two executive board members among them.

One of the HRC members, Joshua A. Barro ’05, appealed earlier to the club’s open-list for Republicans to show that the “next generation of Republicans is tolerant and inclusive” by joining in the march.

“It’s not an official club-sanctioned event, but we are coming to show that there are Republicans who support gay marriage,” said Barro, wearing his blue HRC T-shirt. “I think this is the direction the Republican Party is heading.”

“We’re coming out as individual Christians to show our support for the gays and lesbians who are getting married tonight,” said Stephen E. Dewey ’07. “We are very happy for them.”

A large contingent of residents of Pforzheimer House, some of them clearly inebriated, marched along to show their support.

Across the street from City Hall, several protestors were cordoned off behind a row of Cambridge police officers in full riot gear.

“When the government institutes a sin, it’s the job of God’s people to say something about it,” said Ben Phelps, 28, a Topeka, Kan., resident who had traveled to Cambridge with several members of his church group.

“If you spit in God’s face, God hates you and you’re doomed,” said Phelps, who held a sign with the slogan “Fags Doom Nations.”

FOR WHOM THE WEDDING BELLS TOLL

While the events at City Hall did not begin until late last night, nearly a dozen same-sex couples and supporters were camped outside by mid-afternoon, adorning the historic building’s entrance with flowers, beach chairs and decorative swans. National and local media reporters mixed in with the excited couples, at times outnumbering them.

Away from the hoopla, one couple stood in a silent embrace, clutching flowers received from well-wishers.

“It’s pretty unbelievable,” said Sasha Hartman, an accounts manager at a Boston advertising agency. Hartman’s words echoed the dazed mentality of the couples on hand, many of whom expressed emotions ranging from disbelief to euphoria as the clock ticked closer to the midnight filing time.

Hartman and her partner Alex Fennell were fifth in line for obtaining a license. The two have been together for nine years and live in the South End.

The chance that the legislature will amend the state constitution to ban gay marriage did not dampen the spirits among the soon-to-be-wed couples, though many admitted it weighed on their minds.

“We just want to get the formality done because there’s been so many efforts to take this away from us,” said Fennell, who is an attorney. “It’s there and it’s something you think about. It’s hard to understand why so many people are spending so much energy to take this away.”

Others were skeptical of the legislature’s ability to annul the licenses.

“What are they going to do? Are they going to unmarry us?” Sue Hyde said from the second position in line. Hyde is the New England field organizer of the National Gay and Lesbian Task Force.

Not all onlookers were from the Boston area. Maria Boroff drove with her partner and five-year-old daughter from Philadelphia to witness the historic event.

“I never thought it would come,” said Boroff, who wore diamond-shaped glasses and beads around her neck. “I’m not a marriage activist but President Bush turned me into one. He’s trying to take away a right I didn’t have.”

From the front of the line, with the prospect of marriage hanging in front of her, Hams looked back at how far she and society had come.

“Never in a million years, [it] never occurred to us that we would be able to do this,” she said.

—Claire Provost contributed to the reporting of this story.