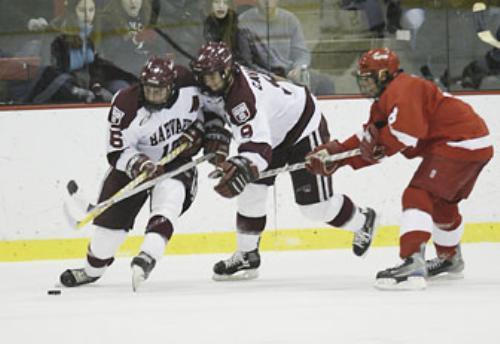 Senior Tyler Kolarik (16) and junior Tom Cavanagh (9) were two of the Crimson's most clutch players during the team's run through the ECAC Tournament.
By Timothy M. Mcdonald, Crimson Staff Writer

A season of great expectations for the Harvard men’s hockey team came to an end late this March at the hands of the University of Maine, just as a season of improbable playoff victories was halted by the Black Bears two years before.

But unlike Harvard’s surprise run through the ECAC Tournament and into the NCAAs in 2002, the current incarnation of the Crimson was the preseason favorite in the ECAC and was slotted as high as sixth in some national polls. With those high expectations, though, came disappointment as the Crimson struggled to find a level of consistent effort up until the season’s waning days.

“When you enter every season, you come in with a different set of expectations,” Harvard coach Mark Mazzoleni explained. “This year, there were very lofty expectations for our team.”

But unlike the Crimson, those four schools all have progressed past the tournament’s open round.

“I am disappointed that we did not achieve more,” junior Noah Welch said. “But I’m so proud that we were able to overcome adversity and put together a championship team.”

The Crimson’s yearlong struggles were first apparent in the fourth game of the season, when the team suffered a third-period collapse against lowly Princeton, falling to 1-2-1 early in the season.

Three swift wins at home followed, including a 5-2 victory over cross-town rival Boston University. During the most difficult stretch of the season—trips to Cornell and Boston College and a home date with UMass—Harvard played some of its best hockey, but dropped two of the three games against nationally ranked opponents.

Following that stretch, Harvard again fell flat, this time in a 2-0 pre-Christmas loss at Princeton.

Things appeared to turn for the better, though, on an early February Friday night in New Haven. Yale roughed up sophomore goaltender John Daigneau, tallying four quick goals by the end of the first period. Junior Dov Grumet-Morris relieved Daigneau in net, and Harvard mounted a furious third-period comeback, overcoming a 5-2 deficit and scoring five third-period goals in a thrilling win.

“The Yale game really showed what our team was capable of, and it was at a point in the season where we needed something like that,” said senior captain Kenny Smith.

Like much of the season, though, an inspired outing was followed by a flat performance against Northeastern in the Beanpot consolation game. And a hotly contested 2-1 win at Clarkson preceded a slow-skating 3-3 tie with St. Lawrence.

“There were a few turning points during the year, but our biggest was the regular season finale against Dartmouth where we shut them out and won 4-0 despite a lot of penalty killing time on our part,” Smith said.

After the game against the Big Green, the Crimson never looked back. The Crimson dominated Vermont in the first round of the ECAC tournament, shutting them out 3-0 in Game 1 and then withstanding a strong comeback attempt to win Game 2, 5-3, and sweep the series.

“[We] were hardworking during the course of the year but struggled to string together wins, especially in the big games,” Smith said. “Every season has a major turning point, and in 2002 and 2004 it was the start of playoffs.”

Building off the momentum of the sweep of Vermont, Harvard traveled to Providence to face a Brown team that had swept the season series and which featured nationally-recognized netminder Yann Danis. Harvard won a close first game 4-2, largely on the strength of solid netminding from Grumet-Morris and then gutted out a tough 3-2 win in overtime.

“I believe that the most exciting win of the year was our OT win at Brown to clinch the second round playoff series on the road,” Grumet-Morris said.

The Crimson entered the ECAC Semifinals in Albany, N.Y. as the third of four seeds, but was considered a favorite by many observers based on its five-game winning streak. The team with the unenviable task of stopping that hot streak was the same team against which it began—Dartmouth.

And so, for the second time in two years, the Crimson met the Big Green in Albany with a spot in the ECAC Championship on the line. Once again, Harvard emerged with a win and advanced to face Clarkson—a surprise entrant in Albany after beating the Big Red on its home ice.

In what might have been the Crimson’s most exciting game of the year, the Golden Knights jumped out to a 2-0 lead after one period. Junior center Tom Cavanagh erased that deficit himself in just under five minutes, scoring two quick goals to tie the contest. The score was deadlocked at two for almost 35 minutes until Smith wristed a shot over the shoulder of Clarkson’s Dustin Traylan with 38 seconds left in regulation.

With its 4-2 win in the ECAC Championship came an NCAA automatic bid, and a meeting with No. 1 seed Maine in Albany a week later. The Black Bears fell behind early as Harvard attacked goaltender Jimmy Howard, the nation’s leader between the pipes. Staked to a 4-1 lead early in the third, though, Grumet-Morris and his defense began to unravel. Maine tallied four goals in under 15 minutes as the Crimson watched a seemingly inexorable late-game collapse extend its three-year NCAA losing streak.