Whether Donning Coats of Bright Red or Fur, Concert Pianist Basks in Spotlight 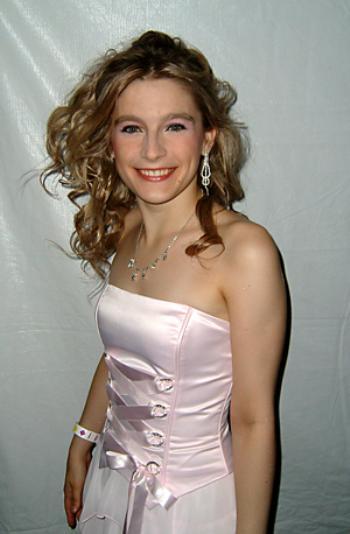 Berenika D. Zakrzewski ’04-’05 has a flare for performance.

She has been traveling the world as a concert pianist since she was nine, performing with the best symphonies in the world and wracking up accolades as a rising piano star.

But Robin Potts ’04 says the proof is in Zakrzewski’s hair.

Zakrzewski naturally has pin-straight brown hair, but when she’s performing in a concert—or simply planning to make an appearance at a party—she’ll whip her thin hair into big curls.

“She’ll transform into a performer when she needs to be one,” Potts says.

Whether walking through the Yard in her signature eye-catching coats or playing piano with world-class symphonies in cities across the globe, Zakrzewski naturally gravitates toward the spotlight.

Zakrzewski describes feeling as though she is “on a different planet for a little while” when she performs in front of hundreds of people and says that vibe is one of the things that keeps drawing her back to the piano.

“Performances are these life experiences where you affect so many people at one time,” she says. “It’s different from all other art forms. That moment is what I live for.”

Zakrzewski was practically born a performer. She started playing piano when she was three and performed with a professional symphony for the first time when she was nine.

She says playing piano has never really been a choice for her—she started because everyone in her family played and cannot even remember when she decided she wanted to be a concert pianist.

“I don’t remember the exact moment. It was always a part of me,” Zakrzewski says. “It’s been my plan since forever. Nothing’s changed except hopefully I’m a better musician.”

Perhaps Zakrzewski’s goals haven’t changed since she touched her first ivories at three, but piano has certainly changed her life.

Since that first concert, Zakrzewski has played with symphonies like the Toronto Symphony Orchestra, the National Arts Center Orchestra and the Sinfonia Varsovia in places all over—the U.S., South America, Europe, Mexico and Japan.

She took a semester off to focus on piano and travel in Europe, has put out her own CD and toured eight countries and 16 cities in South America last year with the Youth Orchestra of the Americas.

This summer, she will perform at the music festival at Tanglewood as well as traveling to other events, like the Aspen Music Festival.

When Zakrzewski thinks back to that first performance with the Sault Symphony Orchestra in Canada, she remembers the innate pull she felt towards playing piano in front of a crowd.

“I was feeling on top of the world,” Zakrzewski says. “It was something I could never imagine not having. It’s not a choice.”

At Harvard, Zakrzewski says she practices around four hours a day normally and up to seven hours a day when she is preparing for a concert. Her mentor is Robinson Professor of Music Robert D. Levin ’68, whom she meets with up to once a week during the year.

In addition to the renown Zakrzewski has garnered for her musical talent, amongst her friends and social circles she has also become somewhat of a style icon.

Friends describe Zakrzewski as eccentric—combining a mix of eclectic influences, including her international upbringing in Poland, Canada and New York City, a daring sense of style and a love of fashion and partying.

Potts, who lived across the hall from Zakrzewski freshman year, says she thinks of Zakrzewski’s floor-length, bright red coat as emblematic of her bold fashion sense—which she can carry off because of her petite figure and devil-may-care attitude.

“Her style is something not everyone could pull off. She’s a very forceful character so she doesn’t take anything from anyone,” Potts says about Zakrzewski’s fashion risks. “She’s very confident about whatever she’s wearing.”

Matt L. Butler ’04, another friend from Canaday, says it was Zakrzewski’s fashionista look that first drew him to her.

“As soon as she came in with her characteristic mink coat I knew we would be friends,” Butler says. “She is an eccentric personality. She wears neon pink and cheeta.”

An essential part of this style—and Zakrzewski’s worldly persona in general—is her European background and extensive travel she has done for piano, according to Butler.

He says that he can always count on Zakrzewski for travel tips—even if they are sometimes unorthodox.

Butler remembers asking Zakrzewski what he should see in Tokyo before traveling there and being skeptical when she told him that one of the must-see cultural artifacts were the toilets, which she said had so many buttons and features “you could fly a plane on this toilet bowl.”

“But she was right, and I was like ‘Go Berenika,’” Butler says. “If you want to know anything about a city, go to Berenika.”

This international influence can be seen in Zakrzewski’s music taste, which she insists does not lean towards a single style or composer. Instead, she lists Madonna, Brazilian jazz and Argentinian tango as some types of music she likes—and adds that she also loves dancing to “whatever’s in the club.”

While Potts says she remembers a time freshman year when Zakrzewski did not have a lot of social time and they bonded because Potts was right across the hall, since then Zakrzewski has made having an active social life a priority.

She is an avid fan of clubbing and is a member of three social clubs: the Bee, the Hasty Pudding Social Club and the Signet.

She has also made it a priority to make it to all the important social events of her senior year—flying straight to the Harvard-Yale game after a concert in Pittsburgh and practically sprinting through the Toronto airport in order to make a connection back from her concert in Edmonton to the Senior Soiree.

In order to make time for a social life—and for academics—while flying to concerts all over the world and maintaining her practice schedule, Zakrzewski has had to be the ultimate multi-tasker at Harvard.

A joint music and government concentrator, she has decided to write a thesis in the fall on the recent influx of art centers in the U.S. because she says a broad knowledge of multiple disciplines will help her be a better musician.

“I want to be complete,” Zakrzewski says. “I want to put as much introspective thought into my music as possible.”

While she has been a multi-tasker at Harvard, in the end Zakrzewski knows that music and performance will always be her primary passion.

Beyond her summer in Tanglewood and finishing her thesis in the fall, Zakrzewski says she looks forward to taking advantage of every opportunity to perform post-graduation.

“I just want to be performing on the world’s greatest stages,” she says.

—Staff writer Anne K. Kofol can be reached at kofol@post.harvard.edu.